A South Carolina college gets tough on gay students

After two students come out, a statement on sexuality is issued 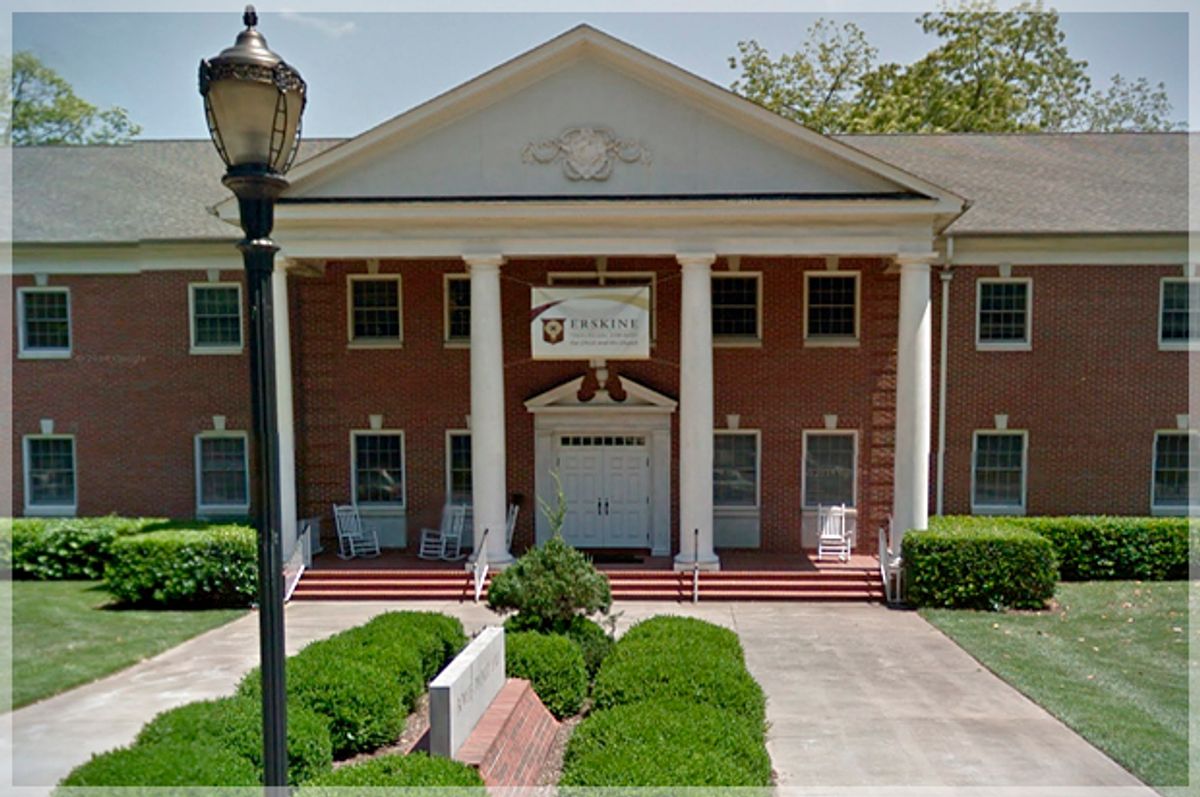 A year ago, a somewhat remarkable thing happened at a small Christian South Carolina college, in the tiny town of Due West. Not one, but two of its Div. II volleyball players came out. But after a period of relatively easy support and acceptance of the young men, this week, the Erskine College and Theological Seminary’s Student Services and Athletic Committee unanimously moved to issue an official statement on human sexuality -- one that was pointedly not LGBT friendly.

In it, the school said it "seeks to treat all persons justly with grace, dignity, and compassion in the Spirit of Christ" and that "Erskine recognizes the complexity of current issues regarding sexual morality, marriage, and other expressions of human sexuality such as same-sex attraction, gender identity, and sex outside the covenant of marriage," but affirms, "The scriptural view of human sexuality is that God formed man and woman in His image (Gen. 1:27-28), and these two were to become one flesh (Gen. 2:23-24). Christ affirms that marital union is to be between a man and woman (Matt 19:4-6)."

Now, any school policy that strongly declares, "All sexual activity outside the covenant of marriage is sinful and therefore ultimately destructive to the parties involved" is not going to be a picnic to abide by whatever a student's orientation. But the specificity of the mention of some cherry-picked parts of Genesis makes pretty clear that this is an environment that has a strong sense of what God's policy toward same-sex relationships is supposed to be. And this isn't the first time the school has pushed back on progress. Four years ago, the school fired a tenured professor of 35 years – one who had openly declared in a kerfuffle over scientific inquiry, "Any college that lets theology trump fact is not a college; it is an institution of indoctrination. It teaches lies. Colleges do not teach lies. Period."

Students Drew Davis and Juan Varona never set out to test school policy. In an interview with Outsports last year, Davis revealed how he'd been accidentally outed during a conversation on Skype with his ex boyfriend while a teammate was in the room. He said that when he'd come out to his parents, "His mother told him he would live a lonely life and never get a job. His father said he would never speak about his son again." Soon after, he attempted suicide by swallowing fifteen hydrocodone pills.

At college, however, it was different. His teammate, upon learning he was gay, told him simply, "Dude, I don't care." He then came out to the rest of his team, and all of them were equally supportive. As it happened, the team would also include another gay male, Juan Varona, a student from Puerto Rico who said last year, "Everybody has been great. I've even had baseball players come up to me and say they were homophobic until they met me. I guess they look at my personality more than whether I'm gay or not." The team, meanwhile, went on to have a successful season.

But some members of the community, which is affiliated with the Associate Reformed Presbyterian Church, were not happy about the development. In a post on an ARP related blog last spring, editor Chuck Wilson commented on the Outsports story, declaring, "The student is attempting to make a statement. No doubt he contacted the Outsports website and provided the details for the story. Indeed, the student wants the publicity. And, if there is a list of private, Christian colleges which are havens for practicing homosexuals, the name of Erskine College is NOW on that sad list. I wonder: what is the student’s endgame?" Gay agenda alert!

Speaking again with Outsports Thursday, Varona said, "I have never received anything but kind treatment from everyone at this school, and my sexual orientation is no secret. So it took me by surprise. I feel that in the time that we are living right now, where even in the conservative state of South Carolina same-sex marriage is legal, the school took several steps back instead of progressing towards a future where everyone can be treated as an equal, which is a future most of the country is moving towards. I understand the religious stand on adultery, which is part of the Ten Commandments in the Bible, and that would apply to heterosexual and homosexual people. But when I saw the mention of sexual orientation being an issue, it just made me sad and worried for other gay people who might be struggling with confidence to come out."

If a religiously oriented school has a strict stance on chastity, that's not exactly surprising. But as the students themselves have shown, it's possible for love and acceptance and friendship to exist quite well, even in a socially restricted environment. There are absolutely no grounds for fear or subtle intimidation, for swaggering around about Biblical man-lady relationships. It does nothing to increase understanding or enlightenment – two concepts you're actually supposed to be instilling in people at a liberal arts college. Fortunately, despite the sad, desperate efforts of people with a dread of progress, progress tends to happen anyway. Gay people are going to keep coming out, keep going to school and playing sports and even, legally, in the great state of South Carolina, getting married. All the passive aggressive rebukes in the world won't change that. As Davis explained last year, "I've never had a team so close. They're like brothers to me. They are so accepting, and that has really made me more confident in myself."