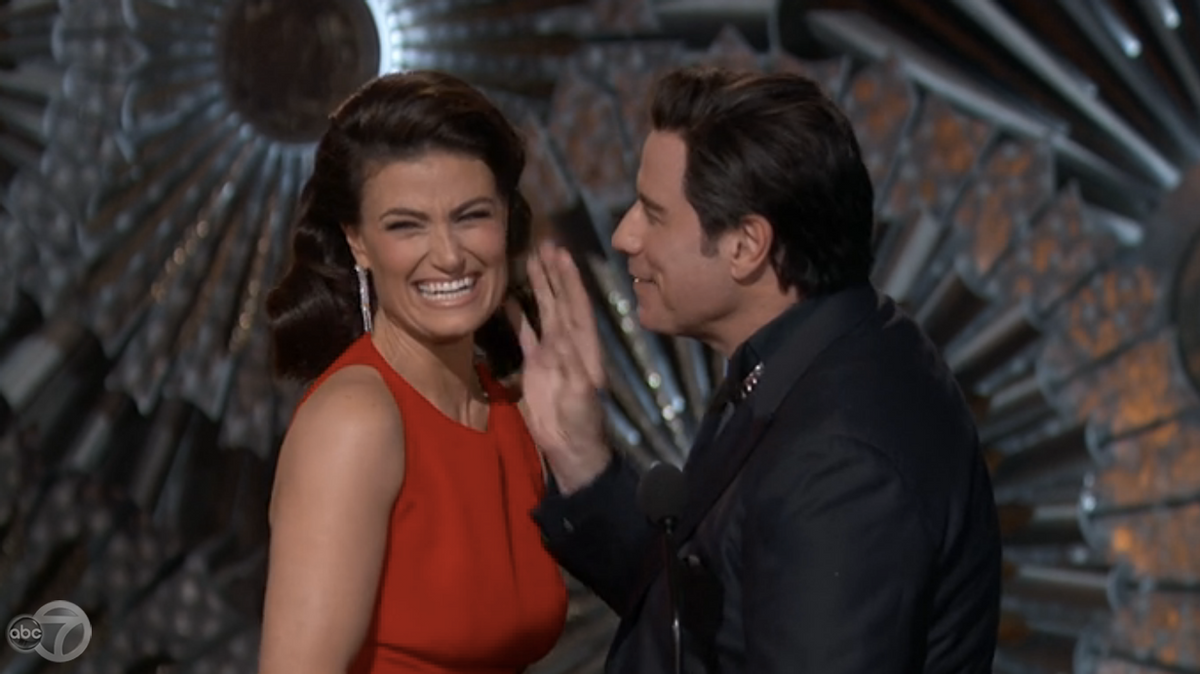 When I started college, one of my first jobs was working the front desk at my university’s admissions office. I shared a desk with my boss, a voluptuous chatterbox who was bright, perky, and personable. She was the kind of woman whose cheeks you'd always want to pinch.

Unfortunately, our department director, a squirrelly little man with comically large glasses, often did just that. When she did something he liked, he would grab her face to show his approval, as if she were a child or a beloved pet.

The first time he did it, she was in front of students. The second time, she was in front of colleagues. When I recently asked her about it, she told me, “I can remember who was there. I can remember exactly how uncomfortable it made me. It didn't actually hurt or anything. It was this moment where I simultaneously felt like an object and also like there was nothing I could do about it, so I should just let it happen.”

More from The Daily Dot: "Classic cartoons are so much funnier with Ice T's voice"

Other friends recalled similar stories from work colleagues, acquaintances, family members, and strangers, in which men touched them without prior consent or approval. One example came from a former coworker who remembered “walking in a grocery store parking lot, wearing a skirt, and a man walked up to me, put his hand up my skirt, grabbed my ass, and then walked off.” A writer I know reported a bizarre incident in which she was “standing at a bus stop [when] a guy rushed [her] and proceeded to kiss [her] foot before hopping on his bus and escaping.”

While these encounters happened between strangers, most women who told me they had experienced unwanted touching from a man said it had happened in a public place, such as a bar or the workplace. The perpetrator was usually someone they knew.

In an office environment, such unwanted touching constitutes sexual harassment (although a great number of women decline to report it, due to factors like social pressure or fear of workplace retaliation.) However, if you're a woman at a bus stop, or if you're picking up hummus at a grocery store, there aren’t the same protections in place. If you’re on stage presenting at the Oscars and a well-known celebrity starts petting your face, there’s no obvious chain of command or boss to report it to.

For the audience, such moments could appear to be humorous. This man is harmless, they all laugh, and the Internet laughs right along with them. It's a shared inside joke that everyone is in on. He’s just a “creepy uncle.” He’s not hurting anyone.

Of course, the celebrity in question is John Travolta, who doubled down on becoming an Internet meme this week after he felt up Idina Menzel’s face onstage at the Academy Awards. Menzel and Travolta appeared together to bury the hatchet over an incident last year, in which Travolta infamously flubbed the “Let It Go” singer’s name, calling her “Adele Dazeem.”

The Internet immediately made a small moment into a viral sensation. Someone created a John Travolta Name Generator, in which the Saturday Night Fever star could mangle your name, too. Adele Dazeem even got her own Twitter account.

So when Travolta awkwardly touched Menzel's face at the Oscars this year, the Internet was bound to react as if the incident was intended to be comical. It was an indication that Travolta had become Hollywood’s “creepy uncle.” But no one saw the encounter for what it was: a moment of public sexual harassment.

More from The Daily Dot: "'50 Fox News lies in 6 seconds' is the Daily Show's gift to the Internet"

In fact, the face-touching wasn’t even Travolta's only transgression that evening. On the red carpet, the star also kissed the side of Scarlett Johansson’s face while he placed his hand around her waist. Photos show that Johansson was clearly uncomfortable with the gesture, her eyes glossing over as she stares into the distance. (Johansson, for her part, has been a good sport and defended him.) The moment should have been shocking and deeply troubling, but instead it got turned into a meme. You can find photos of John Travolta embracing Kanye West, the Statue of Liberty, and his own Hairspray character. How droll!

The lack of outcry beyond the requisite “Wow, what happened to John Travolta?” shouldn’t be surprising to anyone, especially in light of the recent coverage of Vice President Joe Biden embracing Stephanie Carter, the wife of the Secretary of Defense Ashton Carter, during his swearing-in ceremony.

As the Daily Dot’s own Miles Klee reported, “Biden all but demanded that Carter’s wife Stephanie stand near him so he could squeeze her shoulders, sniff her hair, and whisper in her ear.” Klee further reminds us:

It’s hardly the first time that Biden has breached a woman’s personal space. There was that time he got handsy with a White House correspondent. There was the pit stop where he put the moves on a leather-clad lady biker. He’s macked on Irish presidents, Olympic athletes, Hillary Clinton, and Supreme Court Justice Elena Kagan. He got close with the daughter of Sen. Chris Coons, much to her annoyance.

Biden’s behavior might be meme-worthy, but it’s more than an opportunity for clickbait. It’s actively predatory, repeatedly violating women’s personal space and boundaries. At best, his behavior is completely inappropriate; at worst, it’s a gross abuse of power. If the man rubbing your shoulders and creepily whispering into your ear is Vice President and former Parks and Rec guest star Joe Biden, would you speak up?

When you look at Stephanie Carter’s face, the look should be familiar to you. It’s the same one Scarlett Johansson had. It's the look of a woman who knows what it’s like to put up with toxic masculinity.

You can call this behavior whatever you like. The Internet’s preferred euphemism is “handsy,” as if Joe Biden is manhandling a Christmas ham instead of a married female human. But I prefer the term “mantouching.” It’s a riff on the term “manspreading,” which is defined by the Collins Dictionary as a “male passenger in a bus or train splaying his legs and denying space to the passenger sitting next to him.”

In a post for Feministing, Mychal Denzel Smith explains that manspreading is a “performance of masculinity.” Smith writes, “It all plays out like an assertion of male dominance, in which every one of them feels as if they have to claim their territory and their manhood in this public space, even at the discomfort of all the other passengers. Who gives a fuck if you can’t sit, they are men.”

Mantouching operates in a similar way. It's an assertion of one’s masculinity, at the expense of the personal comfort of those around you. When a man touches a woman without asking, he’s doing so because he feels entitled to access to her body. For him, it might feel like a meaningless or friendly gesture. After all, what’s the matter with touching the small of a woman’s back? It’s not like you’re sexually assaulting her.

But for women, it sends a different message. Nancy Qualls-Shehata of Patheos writes, “Your body is not your own, and any good ole boy can grab your butt and no one will stop him. Oh, and you have to pretend it’s OK even if you are seething inside. You have to smile and give him a friendly wag of the finger and hug him.”

More from The Daily Dot: "This heavy metal take on 'Mary Poppins' is face-meltingly wicked"

While a recent Cosmo survey showed that an alarmingly high 1 in 3 women reported being sexually harassed in the workplace at some point in their lives, the prevalence of mantouching is likely much higher, simply because no one ever talks about it. Many of the women I talked to didn’t speak up for fear of being told that they’re overreacting or being hysterical. If they do speak up, the response is usually the same: Stop taking everything so seriously. It’s just a compliment.

The Internet has given a great deal of attention to fighting acts of street harassment, such as women being catcalled in public or told by strangers to "smile." Campaigns like #StopTellingWomenToSmile have drawn particular attention to these daily micro-aggressions that women experience, the small-scale ways in which society reinforces female marginalization. Such micro-aggressions are consummate examples of everyday sexism.

While it's crucial that we address the issue of street harassment, we need to recognize that it's bigger than the street by discussing the ways in which performative masculinity creates a culture where behavior like that of Travolta and Biden is normalized. It might feel good to laugh off such demonstrative behavior as vestiges of a fading masculinity, but the problem with mantouching isn’t that it’s hilariously creepy or weird. The problem with mantouching is that it’s so common that some of the women who experience it might not think it's a big deal. After all, it happens all the time.

You might not think a pinched cheek or a shoulder caress is something to lose sleep over. But the next time you see a man put his hand on the small of a woman’s back, look at her eyes. Look at her smile. If you’re looking closely enough, I bet you can see her faking it. I bet you can see how painful it really is.