What are Wal-Mart & eBay hiding? Shareholders demand transparency about the gender pay gap

Shareholders want to force the mega-retailers to disclose pay disparities. It'll be an uphill battle 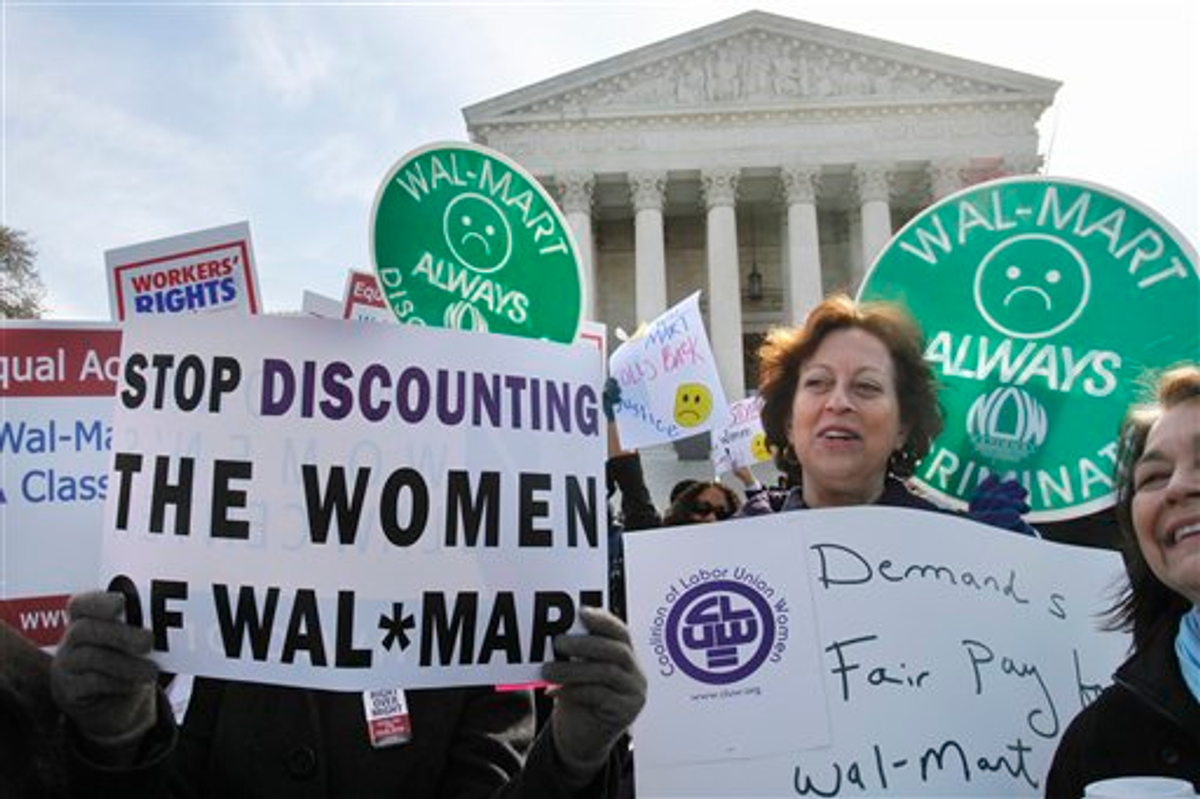 In this March 29, 2011 photo, Carol Rosenblatt of Washington, right, and others, take part in rally outside the Supreme Court in Washington, in support of the plaintiffs in a case of women employees against Wal-Mart
--

Shareholders at eBay and Wal-Mart have filed proposals that would require the companies to disclose pay disparities between male and female employees. Unsurprisingly, both of the mega-retailers have balked at the idea.

The eBay proposal was filed by Arjuna Capital, the sustainable wealth platform of Baldwin Brothers Inc. "The eBay proposal is clearly in the interest of enhancing shareholder value,” Natasha Lamb, director of equity research and shareholder engagement at Arjuna Capital, said last week in a statement. “Gender diversity is a key driver of innovation and performance, factors of particular importance to the tech industry."

The company’s board has said in no uncertain terms that it will oppose the effort. “We remain committed to our ongoing efforts to promote diversity in the workplace and strongly believe we continue to make demonstrable progress in building a diverse eBay," the company responded in a statement. "As such, the Board feels that the proposal would not enhance the Company’s existing commitment to an inclusive culture or meaningfully further its goal and efforts in support of workplace diversity.”

A similar proposal was submitted last month by Cynthia Murray, a Wal-Mart employee who is also a member of the workers’ rights organization OUR Walmart. The resolution would require Wal-Mart to share information about disparities between men and women when it comes to salaries and hours worked, two issues that have been making headlines in recent years. Wal-Mart, predictably, doesn’t think it’s a good idea for it to disclose this information. Particularly because it’s in the midst of multiple lawsuits alleging gender-based discrimination.

“[T]he company believes that disclosure of the information requested by the proposal would adversely affect the company’s litigation strategy in a number of pending lawsuits and claims alleging gender-based discrimination in pay,” according to a letter it filed in January with the Securities Exchange Commission and reported by the Guardian.

Lilly Ledbetter worked at a Goodyear Tire and Rubber for 20 years, and didn’t find out she was being paid considerably less than her male colleagues until someone slipped her an anonymous note disclosing the salaries of three male managers. This secretive disclosure is why she became an activist. It’s also the reason we have a pay equity law named for her.

And last month, Sony Pictures co-chair Amy Pascal said she paid Jennifer Lawrence less because she knew she could get away with it.

Contrary to Pascal's theory, no one wants to work for less money. It's just that, often enough, they don't know that they're working for less money. Case in point: After the Sony hack, Charlize Theron used the pay discrepancies revealed in the leak to negotiate a $10 million deal that put her on par with her male co-star Chris Hemsworth.

A proposal like the ones Murray and Arjuna Capital are pushing for would make pay disparities public, effectively letting employees know “what they’re worth” by sharing salary information.

Murray and Arjuna Capital are shareholders, but that doesn’t mean their resolutions, if they even make it to a vote, will have any traction with other shareholders. Because of what we know about the wage discrimination, it’s likely that transparency at eBay and Wal-Mart would reveal the extent of the problem. The bad press would likely make shareholders nervous.

But those same revelations would have a powerful impact for workers. Exposing pay discrimination would put Wal-Mart and eBay on the defensive and boost workers' organizing. As we saw when organizers with OUR Walmart (and atrocious press) forced Wal-Mart to make a slight bump to its minimum wage, angry workers and scared bosses can be a powerful recipe for change.