You would've hated your heroes: Why history's great people seem so morally deficient

Winston Churchill was racist. Albert Einstein was a chauvinist. And that's not even the half of it! 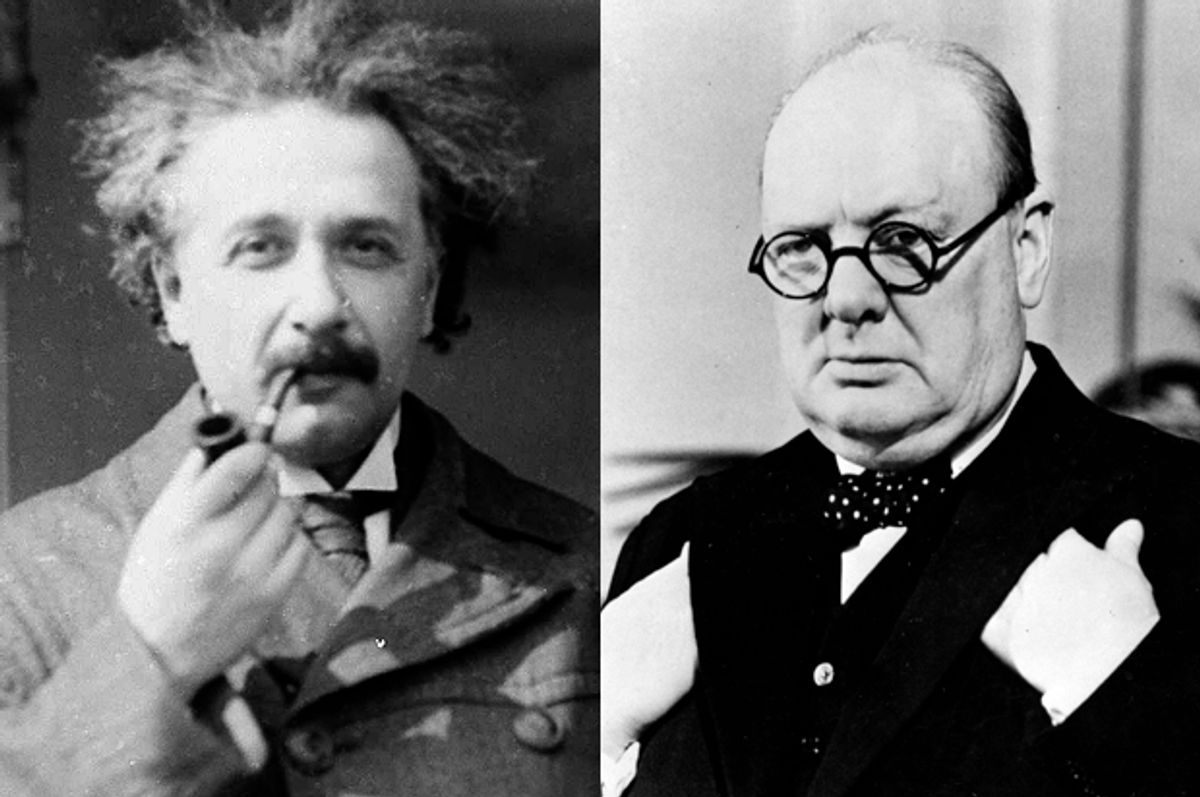 In Woody Allen’s "Midnight in Paris," the film's protagonist finds himself transported back in time to the Paris of the 1920s, where he rubs shoulders with the likes of Ernest Hemingway, F. Scott Fitzgerald, Gertrude Stein and Picasso. Thrilling, right? Who wouldn’t love traveling into the past, and meeting one’s heroes?

In truth, you’re much better off not meeting your idols from past decades or centuries — for the simple reason that, in all likelihood, they were probably assholes.

More precisely: Your historical heroes would have seen the world very differently from you and me. In particular, they probably harbored an array of unpleasant prejudices:

Idolize Winston Churchill for standing up to Nazi Germany? Great, but best to ignore his views on those further to the east: “I hate Indians,” he wrote.  “They are a beastly people with a beastly religion.” Virginia Woolf is a literary hero – but better not dwell on what she said about Jews (despite being married to one): “I do not like the Jewish voice; I do not like the Jewish laugh.” Love John Lennon for his music, and admire him for his pacifism? Great -- but we must now cringe at the way he mocked the mentally and physically handicapped while onstage (painfully captured in surviving concert footage). On the other hand, he stopped short of D.H. Lawrence, who fantasized about constructing “a lethal chamber as big as the Crystal Palace” for disposing of “the sick, the halt, and the maimed” (who, he imagined, “would smile me a weary thanks” for disposing of them). And what about Albert Einstein? When he wasn’t inventing relativity, he was fighting for nuclear disarmament and speaking out for human rights. (All terrific, of course.) But you really don’t want to see the demeaning letters he wrote to his first wife in the months leading up to their divorce.

It is tempting to dismiss such examples of jerkdom by noting that “times were different” back then.  But why were they different? Why are they better today? One bold hypothesis is that we have become, objectively, increasingly moral over the course of time. Several prominent thinkers, including Harvard psychologist Steven Pinker and Princeton philosopher Peter Singer, have argued in favor of this idea. Singer in particular spoke of an “expanding moral circle”: While we once only cared for those in our immediate tribe, we now interact with (or at least, are aware of) people from around the world, from many different backgrounds. We have come to care about those who are outside our group, to feel their pain, to object to their suffering. (This is, arguably, the territory that Shakespeare was exploring with Shylock’s “Hath not a Jew eyes” speech in "The Merchant of Venice.")

In Pinker’s 2012 book, "The Better Angels of Our Nature: Why Violence had Declined," the focus is on the decline of violence over the course of history. But running in parallel to this decline in violence, he argues, has been a rise in moral virtue: Pinker suggests there may be a “moral Flynn effect,” akin to the rise in global IQ scores over the last century described by James Flynn. The two effects, incidentally, could be linked: As we get smarter, Pinker argues, we’re better able to imagine ourselves in the positions of others, and thus more likely to sympathize with them, and recognize their right to well-being.

But the role of technology also needs to be acknowledged: First books, then television and radio, and now the Internet have shrunk our world.  Pinker cites Marshall McLuhan’s idea of the “global village,” where “the fortunes of other people are immediately felt.” Pinker writes: “If the village is the natural size of our circle of sympathy, then perhaps when the village goes global, the villagers will experience greater concern for their fellow humans than when it embraced just the clan or tribe.” Thanks to mass media, now including the Internet and social media, we are instantly aware of moral transgressions, even in spite of their distance. Fifty years ago, a jerk was merely a jerk; today, a jerk could be a famous jerk.

(A good example is the case of Justine Sacco, a communications director for media giant IAC. Before boarding a flight from London to Johannesburg in 2013, she tweeted a racially charged remark about Africa. Internet outrage reached a fever pitch while her plane was still in the air. She was fired soon after landing.)

What additional factors could underlie our moral improvement? The Yale psychologist Paul Bloom cites another possible cause: fiction. We’ve been generating, and consuming, narratives in which we’re more and more often asked to see the world from the perspective of the “other.” He even cites the role of the American sitcom, and, though he doesn’t give specific examples, "Will and Grace" certainly comes to mind as promoting tolerance toward gays. One might also point to "All in the Family":  Yes, Archie Bunker was a bigot; but he was also a buffoon, and hardly a figure that Americans strove to emulate.

If it seems like hubris to declare ourselves morally superior to those who came before us, perhaps there is another way of looking at it.  Our ancestors were, as Pinker puts it, morally backward:

Though they were surely decent people with perfectly functioning brains, the collective moral sophistication of the culture in which they lived was as primitive by modern standards as their mineral spas and patent medicines are by the medical standards of today. Many of their beliefs can be considered not just monstrous but, in a very real sense, stupid. They would stand up to intellectual scrutiny as being consistent with other values they claimed to hold, and they persisted only because the narrower intellectual spotlight of the day was not routinely shone on them.

More recently, writer Michael Shermer has expanded on this idea. In his new book, "The Moral Arc: How Science and Reason Lead Humanity Toward Truth, Justice, and Freedom," he argues that “moral progress” can be directly attributed to the values associated with the West’s embrace of science and reason, which he traces to the beginning of the Enlightenment in the 17th century. As an example, he cites the famous “golden rule” -- that we should do unto others as we’d want them to do unto us. The rule is hardly new -- it’s found in the Bible -- but it is no mean feat to actually put it into practice. To fully wrap your head around the golden rule, you have to mentally place yourself in someone else’s shoes. It is a cognitively demanding task, and one that calls for abstract reasoning.

Today we recoil from the idea of inflicting harm on others -- but it is far from clear why we would have evolved such a stance. From a strictly evolutionary point of view, one might argue, the inclination to choose care over harm ought to be extended only to blood relatives. But, according to Shermer, our ability to reason allows us to extend our circle of caring:

“As our brains become better equipped to reason abstractly in tasks such as lumping dogs and rabbits together into the category ‘mammal,’ so too have we improved in our capacity to lump blacks and whites, men and women, straights and gays into the category ‘human.’”

Is there any reason to believe we’ve reached “peak morality”?  Assuming that we continue to improve, it’s quite possible that people 50 or 100 years from now might look back in disgust at our moral inadequacies.  The most frequently cited example is our treatment of animals:  Singer, in particular, has written about our flawed moral stance toward nonhuman life.  Perhaps in a few decades, chowing down on a hamburger will be considered as obscene as racism or gay-bashing is today.

Being a jerk and being immoral are not exactly synonymous -- and yet, as morality reaches new heights, it seems that jerkdom can only decline.  Yes, there are still plenty of assholes today -- but far fewer than there used to be, when prejudice and hatred were a far greater part of the fabric of everyday life.

Dan Falk is a science journalist based in Toronto.  His most recent book is "The Science of Shakespeare."