"I was a d*ck": Bob Odenkirk on struggling at "SNL," blowing off David Cross and his career regrets 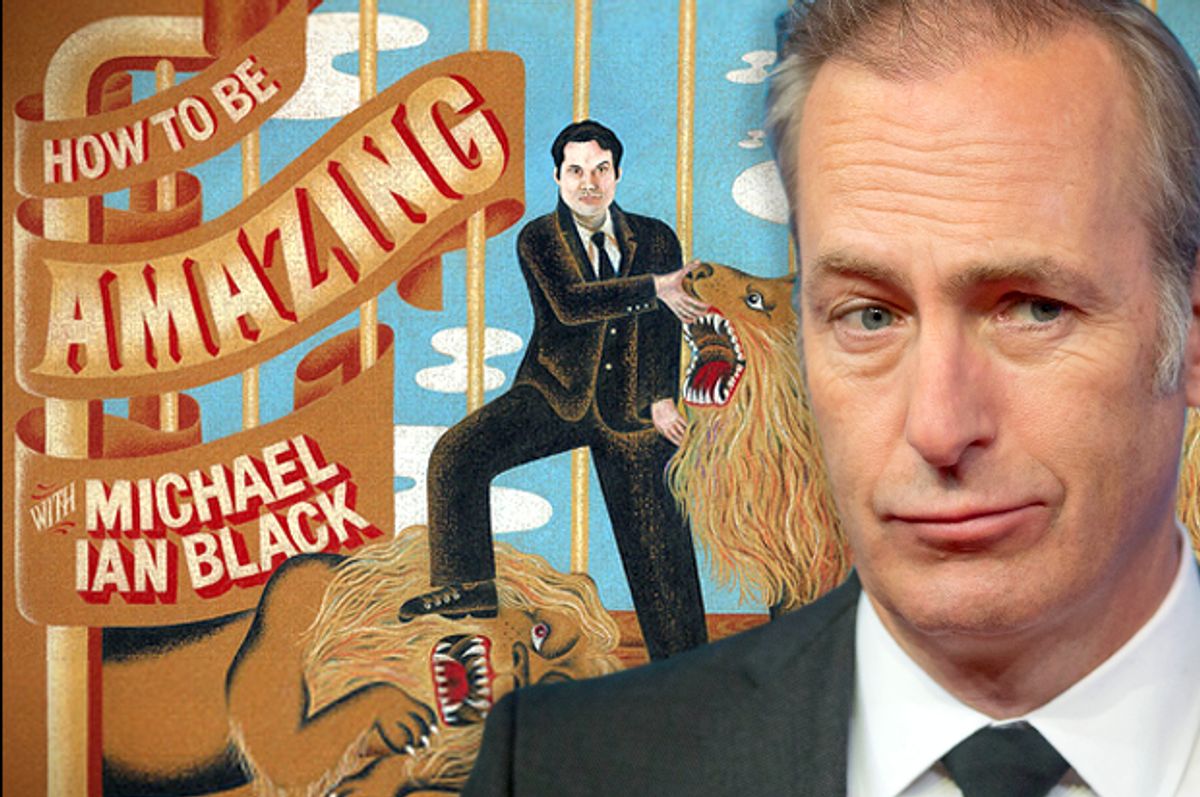 Prolific comedian Michael Ian Black has something new up his sleeve: a new interview show called "How to Be Amazing," in which he talks to prominent figures about how they became successful (read: amazing) in their respective fields. The first batch, released for free on Audible, features magazine editor and teen-of-all-trades Tavi Gevinson, Broadway lyricist Lin-Manuel Miranda, author Elizabeth Gilbert, and actor/comic Bob Odenkirk, while future episodes will feature the likes of Miranda July, Kevin Smith and Amy Schumer. While often very funny, the show is something of a “play for earnestness," as Black puts it, a sincere interrogation of craft and an intimate exploration of the creative process.

Our favorite of the bunch might be Black's interview with Odenkirk. Both have been major players in the so-called "alternative" comedy world, and that makes for a particularly rich and fruitful discussion about the nature of the industry and a juicy behind-the-scenes look at comedic institutions like "SNL," Second City and Odenkirk's own "Mr. Show." The segment certainly sees the "Better Call Saul" and "Mr. Show" star adopting a more serious stance than some fans may know him for, talking thoughtfully about his career, his past regrets, his process as an artist, and how he got where he is today.

Here are some of the most illuminating excerpts, and you can hear the full episode on Audible.com.

On his failures as a director:
Odenkirk has directed three films -- "Melvin Goes to Dinner," "Let's Go to Prison" and "The Brothers Solomon" --- and yet he admits that he never truly engaged with the the material to the extent that he needed. Odenkirk spoke candidly with Black about his failings, saying: "Everybody [in showbiz] has got the same job: their first task is to take on stories and characters that they give a shit about deeply, as deeply as they can. That's your first job, is to care about it on a deeper level and know it on a deeper level, and I don't think I knew any of these three stories on the level you need to and cared about them on the level you need to. I don't think I did justice to those scripts."

He says he regrets his work on "The Brother's Solomon" in particular: "I would love to  see a version of that that is played utterly real, that doesnt have any heightening in its performance or in its visuals, but i didnt come to that place where I knew it until after I shot it," he says. "Terrible thing to feel.”

On how Del Close made him want to do comedy:
Once, as a young man, Odenkirk interviewed famed improv guru Del Close after running into him at a Chicago bookstore. It was a run-in that changed his life. After talking for two hours and seeing how passionate and full-of-life Close remained, even in his old age, Odenkirk became convinced that comedy was a road he wanted to go down.

As he puts it: "I just needed to hear somebody say to me it's hard, there are ups and downs, it's fun as shit, even the downs can be fun, you can end up in a little apartment with the window busted out... you might end up living here, but look how excited you'll be. You'll still be alive inside. And I just needed to hear that and think yeah, that's what I want for me."

On how he came to drama:
While Odenkirk came of age as a comedian, it's interesting to hear that his more serious turns on "Breaking Bad" and "Better Call Saul" are actually in line with a perception he always had about himself as a dramatic actor. "I was onstage doing sketches with Chris Farley and David Cross and all these wonderful people, even Jay Johnston, all these great comic performers. And to me those people are funny the second they walk onstage, and you know why you're laughing at them and they project comic energy. And I never was that," he told Black. "And so I thought that the way in which I'm kind of a complex energy... onstage is good for drama."

On being rude to David Cross when he first met him:
He reflects on being rude to his future "Mr. Show" partner when they first met, bashing a sketch that Cross wrote and then rejecting an offer to play basketball when Odenkirk's friend Janeane Garofalo brought Cross over to his house. "Jerry Seinfeld said that he suspects he might be on the autism spectrum, and I sometimes think all men, and certainly all men under thirty might be," he says. "I certainly look at behavior like that and think 'did you not read that person's generous disposition and moment and respond in kind? You didn't.'"

Odenkirk says he has softened somewhat with age, but was often impatient and harsh at earlier points in his career. "I don't know if I was rude, but I was just like a bull in a china shop. But I was a younger guy. I still can be that way i think."

On struggling at "Saturday Night Live" and not "getting" Lorne Michaels:
Odenkirk was on "SNL" as a writer from 1987 through 1991, but he struggled to get his work on air -- although he did work closely with Robert Smigel on his sketches -- and never really found his niche there.  “A big part of the challenge I had at 'Saturday Night Live' was my own immaturity," he said. "I brought a lot of challenge to the show just because I was a person who was confrontational and suspicious of the establishment. When I was there I treated Lorne like a boss, like the boss of some dumb job I had. Only after I left did I go: the guy’s a creative guy and he created that show and he oversees the creative side of it, and he does overall a pretty damn good job…. but I was like ‘who the fuck is this guy to tell me who’s funny, fuck him.’ I was a dick."