She shot him and it felt like a kiss: The uneasy, quasi-abusive couple at the heart of "Marvel's Agents Of S.H.I.E.L.D." 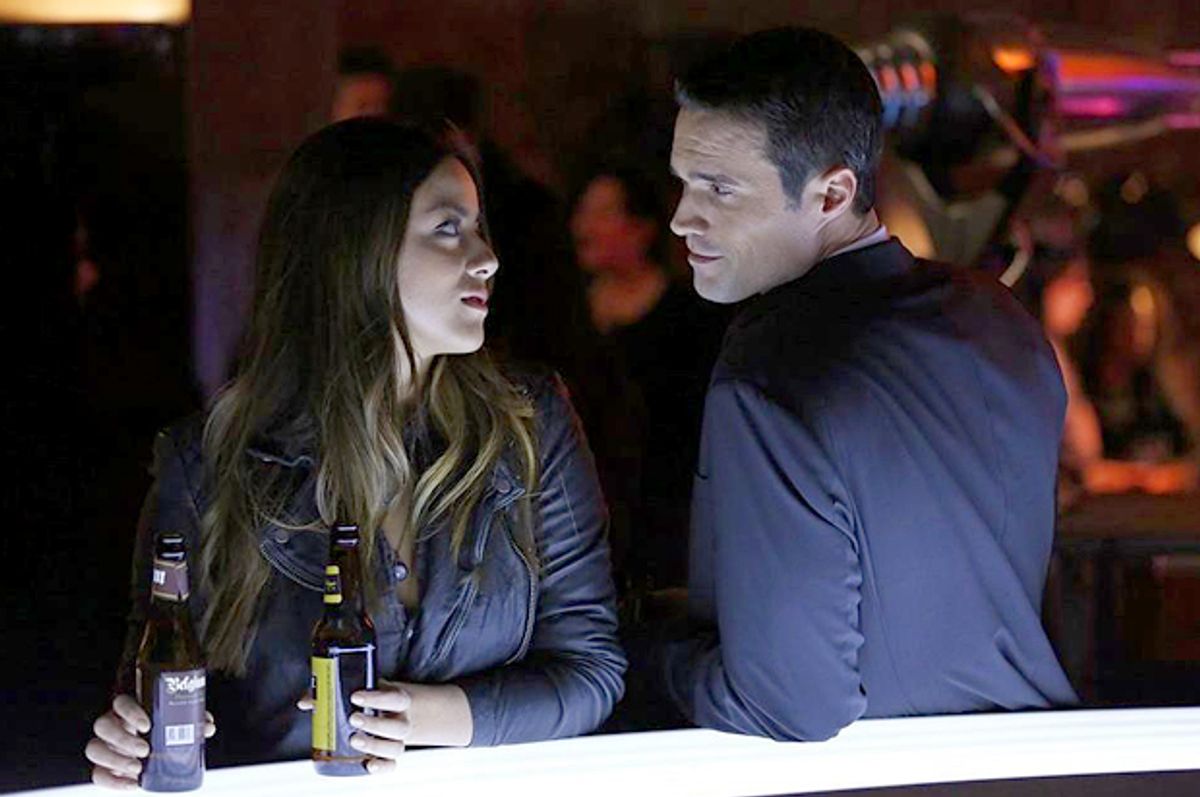 The ABC show, returning tonight, has an unstable, complicated, possibly even abusive relationship at its center. But that’s what makes it so interesting.

The winter finale of “Marvel’s Agents of S.H.I.E.L.D.” was an explosive one, for not just the show but the entire Marvel Universe: Skye (Chloe Bennett) discovers that she not only has alien parentage but that she has superpowers, too. As fans of the comics had guessed already, Skye was born Daisy Johnson, daughter of the supervillain Mr. Hyde/Calvin Zabo (Kyle MacLachlan, in the show) and future superhero Quake, a woman who has the power to create seismic waves. (There’s also a whole lot of other stuff going on, as this USA Today article usefully explains, but honestly, unless you’re really interested in the minutiae of how the fictional Terrigen mist works, you’re set knowing that Skye is now earthquake-alien-woman extraordinaire.)

It’s taken a solid season-and-a-half for “Agents of S.H.I.E.L.D.” to find its footing, due in part to a delayed release for “Captain America: Winter Soldier” and struggles with making the dynamics of the ensemble cohere. Phil Coulson (Clark Gregg) came back from the dead in the blockbuster film “The Avengers” to lead the cast as a non-magical S.H.I.E.L.D. agent just trying to do his job right. But Coulson works better as the mild-mannered straight man than the hero of the story, so the show shifted around figuring out how to showcase Gregg’s talents and also how to play up the stories involving more minor characters, like Agent May (Ming-Na Wen), FitzSimmons (a portmanteau for the scientist duo played by Iain De Caestecker and Elizabeth Henstridge), and newcomers like Bobbi Morse, better known as the Mockingbird (Adrianne Palicki).

But where the show has most successfully landed is with Skye, who came to the S.H.I.E.L.D. team via cyberterrorism and a murky past. This long-simmering secret of hers coming to literal earth-shattering fruition is a storytelling victory all by itself, but hand-in-hand with Skye’s transformation into Quake is the transformation of her relationship with a fellow agent, Grant Ward (Brett Dalton). What started as a teenage hate-flirtation of sorts has become a confusing, troubling, murky relationship, defined by shifting allegiances and broken trust. And in a show that makes hay out of uncomplicated, clearly defined good guys and bad guys—the primary enemy, H.Y.D.R.A., is in Marvel’s mythology an offshoot of the Nazis—Skye and Ward’s unstable relationship is an engine of ambiguity. In the late Season 1 episode “Turn, Turn, Turn,” Skye grabbed Ward by the collar and kissed him, before he ran out into a hallway to try to save her life. In the second-season winter finale “What They Become,” after Ward helps her escape, Skye shoots four bullets into Ward’s side.

So what happened in the middle, between kiss-kiss and bang-bang? Well, there’s a lot. Some of it is straight plot. Ward turns out to be a sleeper agent for H.Y.D.R.A., and starts his nefarious plan for taking down S.H.I.E.L.D. from the inside out at the end of Season 1 (right after Skye kisses him for the first time). But his feelings for Skye are real (or, at least, he’s convinced they’re real)—so when he cruelly jettisons Fitz and Simmons into the ocean and takes over the agency’s aircraft, he’s all the while intending to keep Skye out of harm’s way.

Naturally, this plan has some flaws, not the least of which is Skye’s own lack of interest in being with someone who could betray her and the organization so completely. It’s painstakingly established over the first season that Ward is not just bigger and stronger than Skye; he’s also a far more experienced operative. So while Ward is lying to Skye, Skye starts lying to Ward—pretending that she didn’t find blood on him in the middle of their first date, smoothing over her panic about finding a body in a vent, and manipulating Ward into thinking she’s not onto him—by being into him. (It wouldn’t work without superb work from Chloe Bennet, but the episode where she figures it out—“The Only Light in the Darkness”—is so well done that it sold me on the show.)

It’s cat-and-mouse of a similar variety from there on out. Skye lures him into a public place and then calls the authorities on him. Ward submits to cooperating with S.H.I.E.L.D., but he’ll only talk to Skye. And after breaking her trust the first time, he’s almost fanatical about following through with his promises—helping her contact her father, guiding her through H.Y.D.R.A.’s plans, protecting her well-being. The first half of the second season is peppered with conversations between them that have higher stakes and more tension than almost anything else in the show. And the drama is less about anticipation—I alternate between hoping she’ll kiss him and hoping she’ll kill him—and more about drinking in the complexity of the situation. On one hand, Skye is perfectly justified for wanting nothing to do with Ward—and wanting him dead, too—even if she did like him, quite a bit, before learning about his past. On the other hand, Ward has unmistakable signs of abuse and brainwashing—a flashback episode, “Ragtag,” offers a glimpse of how he ended up pledging loyalty to H.Y.D.R.A., and it’s an act of desperation, not malice.

We’ll discover, tonight, if Skye shooting Ward has any repercussions for her feelings—if anything has changed since this scorching scene from “Nothing Personal.” But the show loves the twisted dynamic between them. The way that Ward and Skye are filmed is almost always done with the intensity of a romance scene; their action sequences read more like sex scenes. In the clip from “Nothing Personal,” when Skye attacks Ward, for a moment their faces are very close together; then Ward pushes her against the staircase and handcuffs her to it, before walking away to wipe blood off his face with an insouciance suited, perhaps, for a post-coital cigarette. Where the dialogue between the two of them could be close-up, to their faces, the camera occasionally delivers a zoomed-out shot that showcases their torsos, not just their faces. And then as the fight turns more emotional—tears well up in both of their eyes—the music, and the scene, take on the texture of a breakup. The episode’s title underscores the nature of the drama—it’s technically business, but it’s reading completely personal.

It’s similarly done, though not quite as well, in the first-season finale, where the tone veers from creepily intimate to lovers’ quarrel as the two advance toward each other, both wearing nearly the same outfits they wore when they kissed the first time. (It’s also worth pointing out that they’re both wearing the same color, black, in a set piece that is otherwise overwhelmingly white. The two are being overtly linked to each other.) And in his bitterness, Ward delivers a line worthy of Christian Grey, one that flirts with torture and humiliation as a form of affection: “You woke up a weakness inside me. For the first time in a while, I wanted something for myself. Maybe I’ll just take what I want, and wake up something inside of you.” (Ostensibly, he’s talking about her superpowers. But, uh, yeah.) And just to seal the deal, “Agents Of S.H.I.E.L.D.’s" official Twitter account celebrated Valentine’s Day—which was also the release date of “50 Shades of Grey”—with a gif of Skye shooting Ward, captioned, “Love hurts.”

I don’t mean to drive the “50 Shades of Grey” point into the ground—it’s bizarre that two different stories on such opposite poles of the storytelling universe would both center romantic relationships that are characterized by pain, abuse and various kinds of torment as a kind of affection, but it’s not that bizarre. Both love and violence are intimate acts. What’s more interesting is that while both stories focus on the female partners of the fraught relationships, Ana from “50 Shades” is drawn to her increasingly brooding hero, and Skye is utterly repulsed by hers. The rest of this season might set up Ward for some kind of redemption—or it might let him wither on the vine.

If only because it’s interesting, I hope that Ward’s chemistry with Skye sticks around. “Agents Of S.H.I.E.L.D.” may be on track to dismantle the nice-guy narrative that has plagued comics since their inception—except for the bad-guy status, Ward’s actually got the trappings of a lot of brooding secret-identity superheroes: long-term lying, an obsession with one pretty girl, a tortured past. Maybe the show’s intent is to undermine it. Or maybe the show’s intent is to just ask some questions about relationships. Skye and Ward, whatever their status, engage with a lot of questions that any of us might have about another person, partner or not: Whether or not you can trust them, or your own feelings; whether or not you can forgive them, if they’ve betrayed you. What’s unforgivable, and what isn’t? And if we believe love to be transformative, is this what it looks like?