Seeking women’s votes in 2014, Walker claimed his abortion laws “left the final decision to a woman and her doctor" 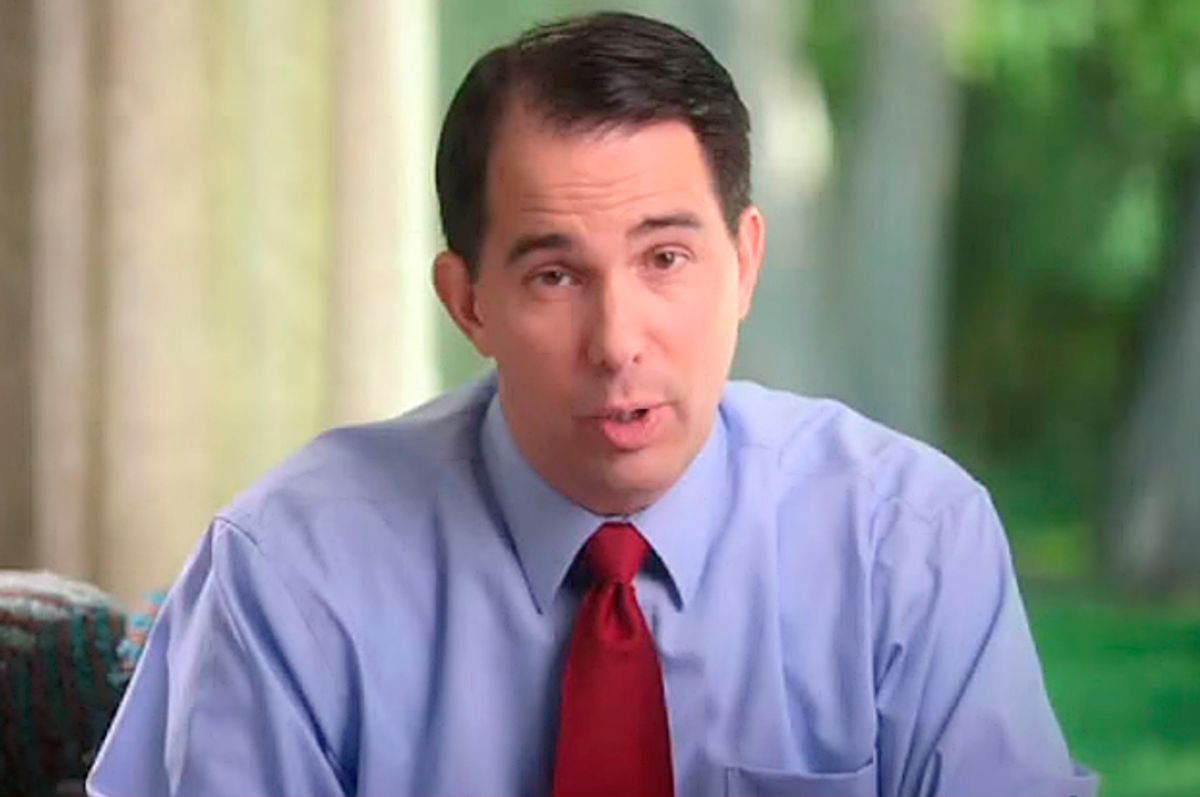 Just last week the New York Times told us that Scott Walker was toughening his anti-abortion stand to woo the powerful Christian right bloc that dominates early GOP presidential primary campaigns. He even committed to a version of controversial personhood legislation, which could outlaw some forms of birth control.

But Walker’s new crusade isn’t going so well. As Luke Brinker wrote here on Monday, anti-abortion advocates are aghast at a perplexing set of answers Walker gave on Fox News Sunday. The Wisconsin governor officially takes a hard line on abortion, opposing it even in cases of rape or incest. He’s signed laws tightening credentialing and hospital admitting privileges for doctors, and forcing women to undergo ultrasounds, with a written script describing the fetus and its development.

But on Sunday, the anti-abortion warrior came off as weak, even ambivalent.

“Well, I think ultimately, I’m pro-life because that’s an unborn child,” he babbled. “When I think of the ultra-sound picture that Tonette, my wife, and saw of our first son, who is now going to be 21 this June, it’s indistinguishable not to recognize that’s a human life. That’s why I’m pro-life.” Describing the tough anti-abortion laws he signed, Walker sounded tepid: “We acted on the grounds that we have legally to be able to act under the Supreme Court’s decision, um, we’ll act that way at the federal level if we were in a position like that as well, but ultimately it is a life.”

“Well, legally that’s what it is under the guidelines that were provided from the Supreme Court,” Walker replied.

It turns out Wallace based his questions on an ad that ran only in Wisconsin, at the height of Walker’s 2014 campaign against Mary Burke, at a moment when advisors apparently worried about the women’s vote. Burke was enjoying a fairly steady 10-12 point advantage with women, and her supporters hit Walker hard for the myriad abortion restrictions he’d passed as governor. An Emily’s List ad featured a Wisconsin nurse practitioner saying abortion “is one of the toughest decisions a woman has to make…Scott Walker needs to get out of my patients’ private lives, out of my examining room, and just leave women alone."

In reply, Walker released an ad that shocked the pro- and anti-choice communities for the way the staunch anti-abortion warrior seemed to misrepresent his position. Watch it here:

He sits in a windowed room and speaks softly, even sympathetically, about the “agonizing” decision whether to end a pregnancy:

Hi, I'm Scott Walker. I'm pro-life. But there’s no doubt in my mind the decision of whether or not to end a pregnancy is an agonizing one.

“I’m pro-life, but…?” That didn’t square with his no-exceptions abortion policy, and it was far more compassion than women facing a choice about their pregnancy usually get from Republicans.

That’s why I support legislation to increase safety and to provide more information for a woman considering her options.

Why, yes, that included a mandatory ultrasound and tougher regulation of doctors and clinics, all of which are intended as barriers to abortion. But Walker wasn’t pitching them that way. He could have said: “I made it harder for women to get abortions in Wisconsin,” but he didn’t.

It got better, or worse, depending on your point of view.

The bill leaves the final decision to a woman and her doctor.

Now, reasonable people can disagree on this issue. Our priority is to protect the health and safety of all Wisconsin citizens.

Abortion rights advocates called Walker's statements in the ad "misleading," "disingenuous" and "false" in a conference call with reporters when the ad was released. Wisconsin anti-abortion forces didn’t seem to take it seriously, given Walker’s strong anti-choice record.

The ad had been hiding in plain sight until Wallace briefly referenced it on Sunday. The conservative group American Principles blasted Walker on Monday: “Claiming you are impotent to act on your core principles is neither true nor wise,” the group’s president, Frank Cannon, said in a statement to reporters. “What about advocating for a ban on abortions after 20 weeks? That’s a law that has already been passed in 12 states, which the Republican National Committee endorses, and which most of his fellow presumptive Republican presidential candidates also support, Jeb Bush included.”

Bush isn’t doing too well in Iowa right now, where the electorate is dominated by social conservatives and where Walker has the lead in early polling. It’s not hard to imagine the monied former governor making an ad using Walker’s 2014 appeal to women to undermine his anti-choice credentials and present him as someone who would “leave the choice to women.” It might not be entirely fair, but it would be well within the bounds of tough presidential primary politicking.

Of course the ad wasn’t evidence that Walker had rethought his position on abortion. It was evidence he wasn’t smart enough to know that what seemed like a good idea during a tough campaign week in Wisconsin would haunt him in Iowa and South Carolina in 2016. And now, he still doesn’t seem to be up to the task of answering a simple question from Chris Wallace.