It has Jenna Maroney (sort of!) 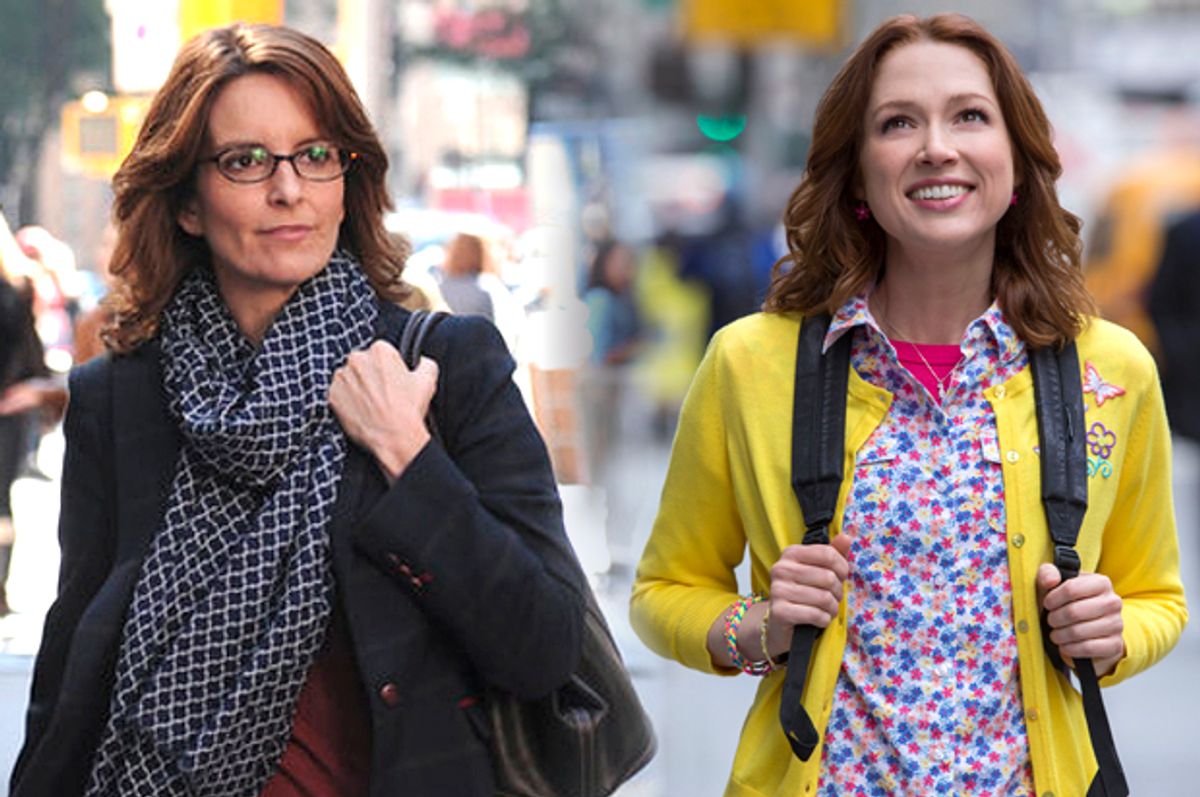 "Unbreakable Kimmy Schmidt," the new comedy from Tina Fey and Robert Carlock, rolls out on Netflix this Friday, and “30 Rock” fans have ample reason to be excited. In it, Ellie Kemper stars as Kimmy, an upbeat young woman trying to make her way in New York after having been imprisoned by a cult leader in an underground bunker for 15 years (trust us, it’s not as dark as it sounds). Admittedly Kimmy is no Liz Lemon, Alec Baldwin is nowhere in sight, and the show steers away from "30 Rock"'s focused industry satire, but there are also more than enough similarities between this and Fey and Carlock’s previous offering to delight fans hungering for a fix. Such as:

Jenna Maroney!:
Good news, Jenna fans — Jane Krakowski is back, and she’s playing a role very similar to the narcissistic “30 Rock” prima donna we know and love. In “Kimmy,” Krakowski plays Jacqueline Voorhees, a vain, social-climbing trophy wife prone to delicious one-liners and liberal use of plastic surgery (unlike Jenna, though, she is a fundamentally good person at heart; the show tends to share "Parks & Recreation"'s more rosy view of human nature). And the “30 Rock” casting overlap doesn’t end there: Kimmy’s roommate Titus is played to perfection by Tituss Burgess, who made quite a mark in his small "30 Rock" role as Angie Jordan's flamboyant pal D'Fwan.

An exploration of class politics:
“30 Rock” derived much of its humor from the conflict between Jack’s Master of the Universe character and Liz’s schlubby writer (and even further, between these two and Kenneth, the wide-eyed pageboy who hailed from a small rural town). “Kimmy” similarly plays with that tension, contrasting Kimmy’s gritty living situation in Brooklyn with that of her well-heeled boss, and deriving much of its comedy from lampooning the ridiculous quirks of upper-class Manhattanites. Fey always excelled when writing for Jack Donaghy, and she similarly hits the mark with the hilariously out-of-touch Jacqueline, who says things like this about her dog, Abattoir, who doesn't poop: "They bred that out, so his anus is purely decorative."

Brilliant one-liners:
Speaking of which: “30 Rock” had some of the best one-liners in the biz, and every other line that came out of Liz, Jack, Jenna or Tracy's mouth could be adopted as a life mantra, from to "live every week like it's Shark Week" to "never follow a hippie to a second location" (gah, we're getting nostalgic just thinking about it). Thankfully the “Kimmy” scripts are similarly rich -- the show is chock-full of quotable, rapid-fire non-sequiturs and surprising pop culture references, each character loaded with a treasure trove of zingers through which we can come to know their twisted world-views (My favorite, from Jacqueline's spoilt step-daughter Xanthippe: “that guy’s so old he fought in some war with Germany, the guys from soccer.")

Sharp media parody:
While not a direct showbiz satire like "30 Rock," "Kimmy," like all of Fey's work, very much has its finger on the pulse of pop culture. In the pilot, Kimmy and her fellow "mole women," as they are cruelly dubbed, go on "The Today Show" to talk about their imprisonment, and the media's derogatory treatment of Kimmy and her friends is on par with any of Jack Donaghy's exploitative reality show pitches on "30 Rock." Much of the show's humor is predicated on Kimmy coming to terms with 21st century pop culture and technology after being in isolation for 15 years, and it's incredibly fun to watch Kimmy navigate the idiosyncrasies of modern life, from selfie-taking to twerking, even if she's still a "Billy Madison"-quoting '90s teen at heart (At a club, when asked "Are you into molly?" she responds "She's my favorite American Girl doll!") Should you continue to doubt the show's commitment to mining all corners of the contemporary media landscape, let me just say the opening credits sequence is literally an Antoine Dodson-esque auto-tuned viral video mashup. It is amazing.

A strong woman at the helm:
Ellie Kemper’s resilient, upbeat Kimmy is a very different type of woman than Liz Lemon, but both are independent and unconventional female role models struggling to make their way in a male-dominated world (in Kimmy's case, her childhood was snatched from her after being kidnapped and imprisoned by a misogynistic abuser). Despite Kimmy's naivete, she's fundamentally strong  -- certainly an underdog, but one who never gives up or lets the world get to her. And the show is similarly progressive in other ways; as Time's James Poniewozik puts it, "Like Fey’s other work, Kimmy is intersectional; it’s connecting and contrasting the experience of outsiders, black and white, straight woman and gay man, sister-wife and trophy wife." So far, the main characters are four women and a gay black man, and the absence of rich old white men in the show is truly refreshing. (Jacqueline's husband is never seen in the first six episodes; whether he will remain out of sight, a la Maris from "Frasier," remains to be seen.)

New York City:
It's a cliché to say that the city is a character in the show, but it's no coincidence that Kimmy decided to make her fresh start in the Big Apple. Much like in "30 Rock," the city, with its polarized class divisions and its tantalizing promise of reinvention, is the perfect staging ground for our leading lady's antics. Viewers are invited to relish the city's eccenticities anew as they explore it through Kimmy's eyes -- some scenes are reminiscent of Will Ferrell in "Elf" --  saying "wheee!" on the subway and lunching at Dylan's Candy Bar, while Titus slaves away in an Iron Man suit in Times Square and dreams of playing Spider-Man on Broadway.

A whimsical aesthetic:
Unlike more reality-based sitcoms, “30 Rock” was never afraid to spiral into flights of fantasy or dabble in magic realism, and "Kimmy," with its wickedly high-concept premise, might be even more off-the-wall than its predecessor. We don't want to spoil to much, but fans of Fey's manic callbacks, flashbacks and rapid-fire tangents will feel just as at home in the off-kilter New York of Titus and Kimmy as they did in the halls of Rockefeller Center with Jack and Liz. Can you tell that we're fans?