Be on the same team as LeBron James!: Sheryl Sandberg's hollow Lean In Together feminism 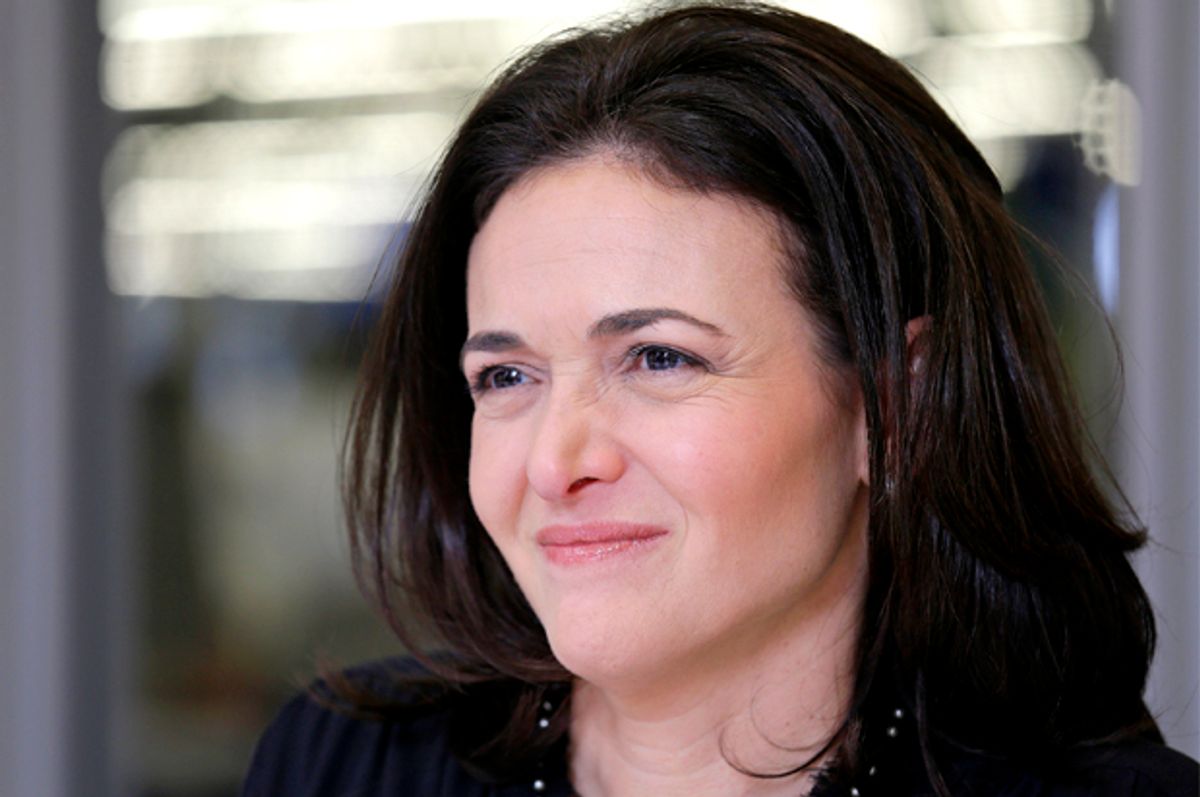 Sheryl Sandberg’s Lean In campaign is back in the news today, with a shiny new Web campaign called #LeanInTogether and a New York Times opinion piece explaining “How Men Can Succeed in the Boardroom and Bedroom.” The campaign is a feel-good sales pitch for men to support gender equality that sweetens the deal with promises of higher profits, better sex and the chance to be on the same team as LeBron James.

Sandberg (and her co-author, Adam Grant) argues that “equality is good for men, too,” by pointing to studies that show that women help businesses succeed: “Equality is not a zero-sum game. More profits mean more rewards and promotions to go around.” They also tout the benefits of equality in the (heterosexual, two-parent) home, where involved male partners will reap the rewards of happy children and happy wives if they perform their share of household labor. “Couples who share chores equally have more sex,” they promise. “Choreplay is real.”

There’s nothing horrifically wrong with any of this, or with the “Tips for Men” at work and home that Lean In Together proposes on the website. “Be an active father,” “Challenge gender stereotypes” and “Give women credit” are all lovely pieces of advice and slogans. As Emily Greenhouse points out at Bloomberg Politics, “Lean In Together offers nothing to object to. And that’s the genius of it… it’s designed to be purely unobjectionable.” (I do object to Sandberg’s invocation of the frequently racist 19th century women’s suffrage movement as a case study in effective movement building through appealing to men’s self-interest and her co-optation of Martin Luther King’s legacy for a lesson in marketing, but that’s largely beside the point.)

But the assertion that “equality is not a zero-sum game” belies a fundamental hollowness at the core of Lean In Together’s brand of feminism that ignores the realities of our capitalist society where resources and power are finite. One need only look at Sandberg’s examples in the business world to see where this analysis falls short. We’re told that gender equality in the workplace leads to higher profits, but profit doesn’t grow on trees. That money is being extracted from somewhere, and in the case of Lean In Together’s corporate partners like Target, it’s coming from the exploitation of labor of factory workers overseas and retail workers at home.

Women retail workers earn $4 an hour less than men, according to a report released last year, and Target is well known for opposing any efforts by workers to lean into forming a union—one of the best ways for women workers to achieve pay equity. According to the National Women’s Law Center, the pay gap between men and women union members is 40 percent smaller than the gap between men and women non-union members. Paying all low-wage workers a better (and equal) salary would help poor and working-class women pay the bills, raise their families and maybe have time to enjoy some quality choreplay with their partners, but it would cut into the very profits that Sandberg promises will increase from gender equity at the corporate level.

An honest look at Sandberg’s own industry—and the primary source of Lean In Together corporate partners, which include AOL, Facebook, Google, Instagram, Twitter, LinkedIn, Yahoo and YouTube—shows another zero-sum scenario that Lean In Together avoids. This, after all, is an industry notorious for its horrible gender balance. Sandberg’s own company, Facebook, has a workforce that splits 69/31 male/female, with only 15 percent of technical jobs filled by women. An attempt to quantify women in engineering jobs across the tech industry found that the average is 12.33 percent women. If the tech industry is going to achieve anything close to gender parity, it’s going to have to either fire a bunch of men or at least stop hiring so many of them. Individual men will lose out. In my opinion, that’s a good thing, but let’s not pretend that a hashtag is going to assuage the feelings of that Stanford computer science grad who’s been conditioned to believe that he does deserve that six-figure job at Google.

Sandberg is right that men have a role to play in creating an equal society, and it’s useful to consider the ways that interpersonal gender dynamics interact with and inform institutional sexism and patriarchy. I also believe that a truly feminist society will benefit all people, but that’s because a truly feminist society won’t be based on maximizing corporate profits for a privileged class of men and women who lean on the labor of the global underclass.

This Sunday marks International Women’s Day, a holiday originally known as International Working Women’s Day, which celebrated the struggles of women workers who fought in the streets and on the factory floors to wrest better wages and working conditions from their bosses. Those bosses fought back, as will the corporate bosses of Facebook and Target and every other corporate partner of Lean In Together when women workers demand better conditions at the expense of their profits. Buying into #LeanInTogether is only a distraction from the real struggle for equality and justice for all women, and the only people who will win if we buy into that distraction are the corporations trying to sell it to us.