Ringling Bros. to phase out elephant acts by 2018

"If the decision is serious, the circus needs to do it now" 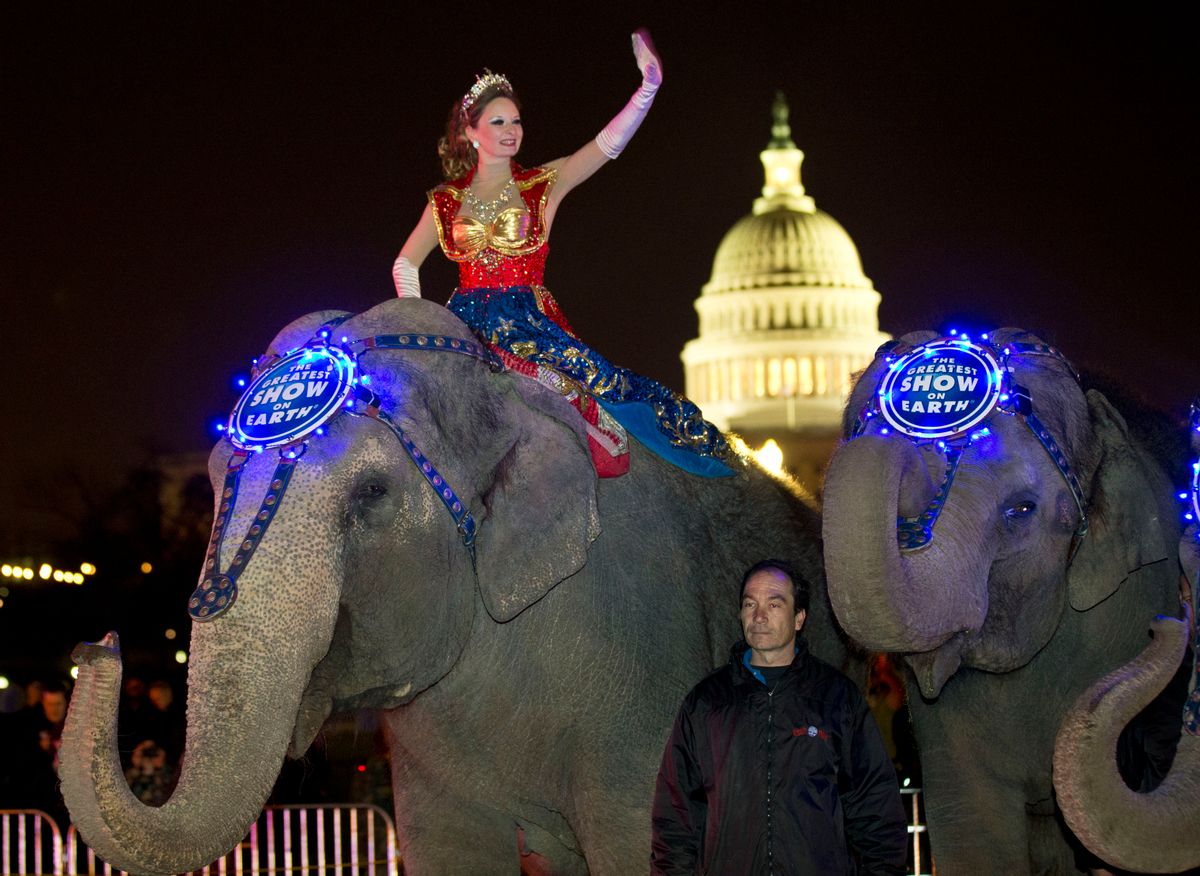 FILE - In this March 19, 2013 file photo, a performer waves as elephants with the Ringling Bros. and Barnum & Bailey show, pause for a photo opportunity in front of the Capitol in Washington, on their way to the Verizon Center, to promote the show coming to town. (AP/Alex Brandon)
--

On Thursday, the Ringling Bros. and Barnum & Bailey Circus announced that they would phase elephants out of their performances by 2018. The 13 elephants currently in use by Ringling Bros. will be sent to the company's Center for Elephant Conservation in Florida, where they will join 29 other retired circus elephants.

Kenneth Feld, Chairman and CEO of Feld Entertainment, the company that owns the circus, said in a statement: "This is the most significant change we have made since we founded the Ringling Bros. Center for Elephant Conservation in 1995. When we did so, we knew we would play a critical role in saving the endangered Asian elephant for future generations, given how few Asian elephants are left in the wild... This decision was not easy, but it is in the best interest of our company, our elephants and our customers."

Feld owns the largest group of Asian elephants on the continent. According to the New York Times, it costs around $65,000 to care for a single elephant per year.

Another reason for the decision, company President Kenneth Feld said, was that certain cities and counties have passed "anti-circus" and "anti-elephant" ordinances. The company's three shows visit 115 cities throughout the year, and Feld said it's expensive to fight legislation in each jurisdiction. It's also difficult to plan tours amid constantly changing regulations, he said...

In Asheville, N.C., city leaders recently prohibited wild and exotic animals from performing at the U.S. Cellular Center, the city's municipal venue. And in Los Angeles in 2014, the City Council banned the use of bullhooks by elephant trainers. Animal rights activists say bullhooks are cruel and abusive, while circus leaders say they're needed for safety and point to federal approval of the devices.

The circus has long been criticized for seriously mistreating its elephants to the point of abuse. PETA's president Ingrid Newkirk said that the company's deadline of 2018 is too far off: "Three years is too long for a mother elephant to be separated from her calf... too long for an animal who roams up to 30 miles a day in the wild to be kept in shackles. If the decision is serious, then the circus needs to do it now."