Ted Cruz's healthcare sham: Repealing Obamacare and replacing it with nothing 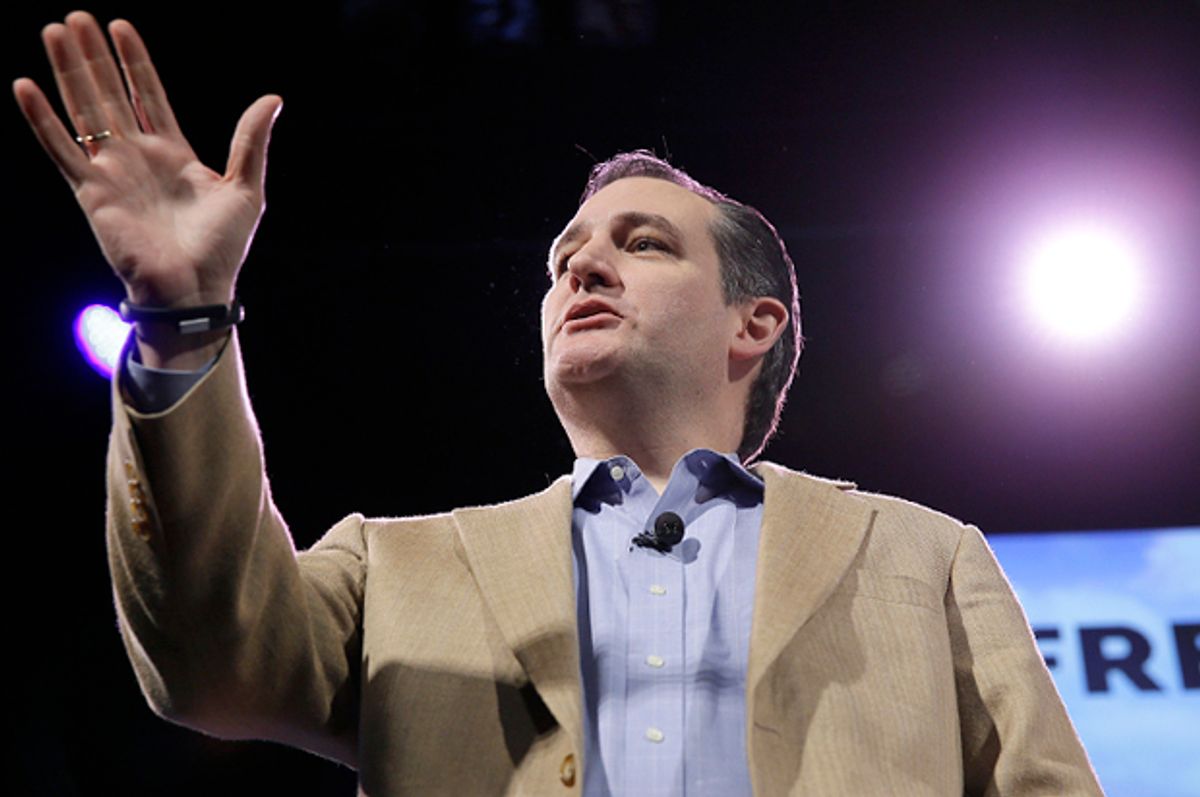 One of the biggest criticisms of the GOP when it comes to healthcare reform is that, for all their blustering and fulminating against the Affordable Care Act, they just can’t seem to put together a coherent plan of their own. The Washington Post’s Greg Sargent leafed through his calendar this morning and discovered that Republicans have promising to unveil their big Obamacare replacement for 50 months, a gestation period that is about twice as long as that of actual, real-live elephants.

Instead of substantive plans, they give us vague notions of plans spelled out in newspaper Op-Eds. Typically they don’t progress much further beyond gauzy promises of cheap, comprehensive health coverage rooted in “freedom” and “patient-centered reforms.” In the past couple of weeks alone we’ve seen healthcare “plans” put forward by former Sen. Phil Gramm (the “freedom option”), a trio of Republican senators (“freedom and flexibility” for the states), and a trio of House Republicans (“an off-ramp out of ObamaCare toward patient-centered health care”). It’s all the same non-specific prattle we’ve heard countless times over the past five years, and it’s intended to give the impression that the GOP is finally, finally, finally getting serious about healthcare reform.

Now we have a brand new entrant into this discussion: Ted Cruz. The junior senator from Texas unveiled his very own healthcare plan this week and actually managed to put his determinedly vague colleagues to shame by crafting an actual piece of legislation that you can hold in your hands. Make no mistake: his proposed bill is a pile of hot garbage that will screw over countless people. But hey, at least it’s a plan!

Cruz has long been adamant that every single word of the Affordable Care Act should be repealed, but his proposed legislation only takes out part of the ACA. It would immediately repeal Title I of the Affordable Care Act, which would eliminate the individual and employer mandates, the state-based exchanges, subsidies for purchasing insurance, the protections for people with pre-existing conditions, the requirement that kids can stay on their parents’ plans until age 26, the prohibition on capping lifetime benefits – basically most of what people love and hate about the ACA. Simply put, Cruz wants to strike down most of the policies the ACA put in place to protect consumers from the worst abuses of the insurance market, and in their place he’d put… nothing.

Instead, Cruz’s big idea is to make it easier for insurance companies to sell policies across state lines – an idea that gets incorporated into pretty much every Republican healthcare reform proposal. Let insurers compete with each other in a nationwide market, the thinking goes, and the invisible hand will push healthcare prices down to the point that people can actually afford them and get the coverage they want. That’s Cruz’s fanciful vision, at any rate. The reality would be far different – insurance companies would set up shop in the most lightly regulated state(s), sell cheap-as-dirt barebones plans to healthy individuals, and leave the sick and the elderly priced out of the market or denied coverage altogether. The market would be completely skewed in favor of people who don’t actually need healthcare.

Cruz’s plan is extreme, and fits in well with his “burn it all down” approach to governing. Most conservative health policy proposals envision some form of subsidy to help people buy insurance (Cruz believes that the ACA’s subsidies are “insidious”) or a lighter-touch approach to regulating the insurance market that puts in place at least some form of protection for people with pre-existing conditions. But that’s not part of the Ted Cruz vision for America’s healthcare policy. If you’re a low-income person who doesn’t qualify for expanded Medicaid (or lives in a state that rejected the Medicaid expansion), you’ll just have to hope that premiums will drop low enough so that you’ll be able to afford something (assuming you’re not already sick).

And that helps to explain why the Republicans still haven’t united around an alternative to the Affordable Care Act. Some Republicans are willing to grapple with the reality that crafting healthcare policy requires trade-offs and striking a balance between subsidizing coverage and regulating the insurance market in order to expand coverage. Influential conservative legislators like Ted Cruz, however, don’t inhabit that reality. He clearly doesn’t care about expanding coverage and doesn’t seem overly concerned with the idea of returning to the bad old days of insurance company discrimination. His main concern is getting rid of Obamacare – the free market will take care of the rest.