"Reason with water rather than repel it": Architects take on Boston's watery future

Few cities are as vulnerable to sea level rise as Boston. That's where the Living With Water project comes in 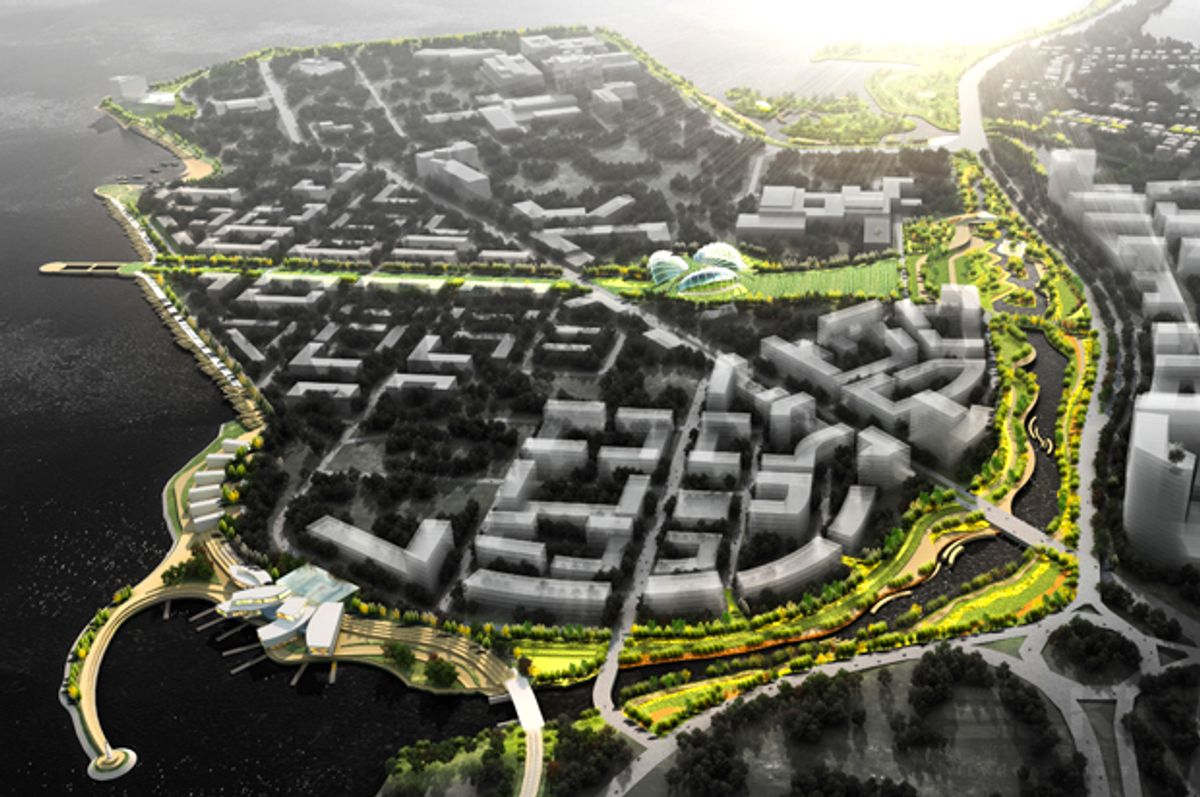 In one vision of Boston, a network of canals fills and empties with tides and storm surges. Water is drawn through sluices with embedded, hydroelectric turbines, generating power.

In another, an aquatic park snakes around an urban island fortified with terraced steps that keep the ocean in sight but out of reach.

These are two of the nine finalists in Living With Water, a competition to redesign Boston for the year 2100, with the assumption that sea levels are 5 feet higher than today. For many coast-dwellers, that prospect is an existential threat so serious that it’s better not to think of it at all.

Collectively, the ideas from Living With Water try to make a counterpoint: That realism and optimism, when it comes to sea level rise, are not incompatible. On the one hand, the water is rising. On the other, we can rebuild in such a way to live happily with a strengthened sea.

For a city like Boston, there’s not much choice. According to a World Bank study from 2013, only seven cities in the world are more vulnerable to flooding. (The other U.S. cities: Miami, New York, New Orleans and Tampa.)

This point may have been on Bostonians’ minds, but it’s about to be on their balance sheets too. Preliminary drafts of FEMA’s new flood maps, which will be finalized some point in the next few months, have severely adjusted the city’s exposure in a hundred-year flood event.

All those homes and businesses, a swath that includes new and expensive buildings like the Institute for Contemporary Art, must now pay the kind of flood insurance premiums more familiar to residents of beachfronts and barrier islands.

There’s a bit of irony here, because the history of Boston development is essentially a story of turning water into land. This was common practice in all littoral cities; New York, for example, sold bargain-priced "water plots,” muddy strips of beachfront whose value could be realized through infill. Washington, D.C., pulled the land for the Jefferson and Lincoln Memorials right out of the Potomac.

But Boston was a step above the rest, unfurling new territory at a rate that was unmatched in its time. (In the century after Boston stopped expanding, Hong Kong has reclaimed more than 20 square miles of land!)

Prior to 1900, Boston tripled its landmass through land reclamation alone. The historian Walter Muir Whitehall termed it “cutting down hills to fill the coves,” and he was not being poetic: Beacon Hill, for example, was decapitated to fill in a pond that’s now Bulfinch Triangle. Fort Hill became Chinatown; Pemberton Hill created the ground for North Station.

The city’s greatest geoengineering feat, though, was the creation of the Back Bay neighborhood, a decades-long infill project that reclaimed 700 acres of stagnant marshland. Trains brought thousands of cars of gravel in from the countryside. Rubble from the Great Fire of 1872 was piled into the mud as well. By 1900, the former marsh was one of America’s most thriving and elegant urban neighborhoods.

If 19th-century Boston conquered and expelled open water, 21st-century Boston will have to adopt a more porous stance. A fair bit of the city’s reclaimed territory — such as the booming Seaport District — is likely to find itself in FEMA’s flood zones when the agency’s revised maps are finalized this year. According to the agency’s preliminary maps, released in 2013, the land bridge between the North End and the rest of the city would shrink to less than 300 yards during a 100-year flood. (It’s currently a half-mile from the mouth of the Charles to the harbor in that spot.)

Since superstorm Sandy in 2012, Boston has seen four “near-miss storms,” where if the surge had hit at high tide, the 100-year mark would have been reached.

Predictions that account for future sea level rise are far more foreboding. The consensus is that the sea will rise 5 to 6 feet. At high tide, Back Bay will be underwater. An Urban Land Institute report last year recommended that the neighborhood incorporate a network of canals, bridges, artificial wetlands and flood control gates. It suggested similar changes for low-lying areas like Alewife and the Seaport area.

At first, the shape of Boston 2100 at high tide looks foreign. Unlike, say, Manhattan, the city doesn’t shrink but maintains its general shape. Whole neighborhoods are missing beneath the sea. But if you know your Boston history, the map is instantly familiar: The land looks virtually the same as it did in 1630, when the city was founded.

This is the landscape in which Living With Water takes place. The competition has three separate sections. The first asks designers to adapt a privately owned condominium building on the North End. The second requests a master plan for a large plot on Fort Point Channel. The third (from which the two earlier examples are finalists) focuses on infrastructure further south.

“We chose sites that are approaching a degree of vulnerability already, facing episodic flooding already, and will face inundation earlier,” said John Dalzell, a senior architect at the Boston Redevelopment Agency, which helped launch the competition.

Despite their diversity, the solutions share a desire to reason with water, rather than repel it.

This is not accidental. It turns out that there is already a scheme to erect a Zuiderzee-style barrier in Boston harbor, strung between the various islands. The problem with the so-called Sea Belt, proposed by the architect Antonio di Mambro in 1988, is that it has for too long served as the default proposal in the popular imagination. “It’s a really robust idea,” said Julie Wormser, the executive director of the Boston Harbor Association, another organizer. “But it was the only idea out there for 25 years.”

While Boston’s sheltered natural harbor precludes a New York-size storm surge, Wormser envisions the eventual solution as a “belt-and-suspenders” combination of barriers and adaptive design. There is no question, she told me, that Boston’s future solutions are being expressed in these renderings. “We very much hope that those proposals that fit Boston and are doable actually will be developed.”