It's time to take back "moral" language from the right: New York adopts Moral Mondays from North Carolina

New York may be a blue state, but "both parties are controlled by hedge funds and Wall Street" 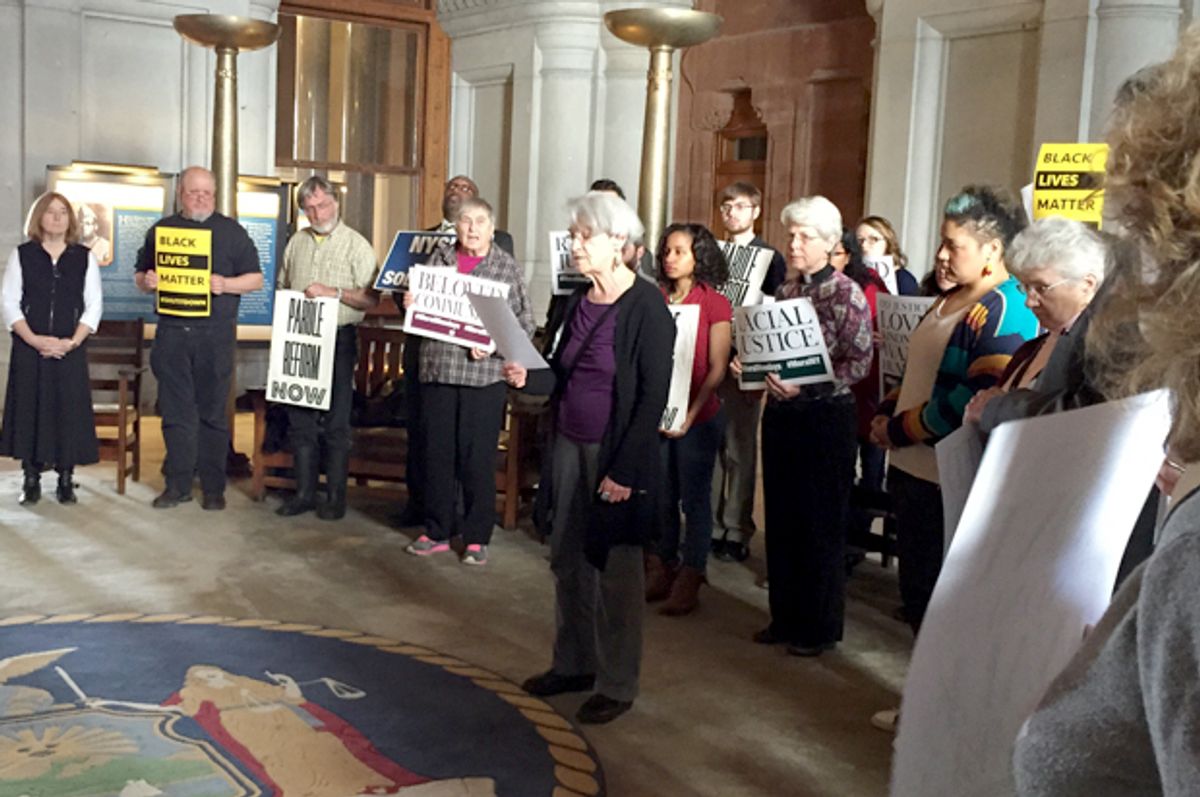 The ceiling of the “War Room” in the New York State Capitol in Albany is decorated with elaborate murals of the wars New Yorkers have participated over the history of the United States. The one that draws the eye the most is a Native American man wrestling with a white colonist.

In the middle of the room, a group of about 40 people stand in a circle, holding signs that read “Black Lives Matter,” “Parole Reform Now,” “Racial Justice” and “Faith Stands Up to Pharoah.” Most of them also contain the hashtags #MoralMondays and #MoralNY.

This vigil is part of the new Moral Mondays effort in New York state, bringing together faith leaders, labor, community groups and movement organizers to challenge the state government on its conservative, business-dominated politics. Though the popular cliché has it that New York is a “blue” state, dominated by liberals, the organizers in this room are calling attention to the broad inequality that still pervades the state—and they're doing it through a framework that was born in North Carolina.

Today's event, capitalizing on recent energy around criminalization and policing created by the Black Lives Matter movement for racial justice, is about mass incarceration. Joe Paparone of the Labor Religion Coalition of New York State tells the crowd that just ending the drug war will not be enough to change mass incarceration in the U.S. and suggests we need to have a justice system that will be able to “restore people who have done terrible things but are not terrible people.”

Another speaker urges the crowd to remember the “moral righteousness” that led the abolitionist movement that ended slavery in the U.S. “Black Lives Matter when we can make money for the system,” he notes, drawing the connection between athletes in the Super Bowl whose bodies are valued “as a commodity” and the lack of value placed on black lives like his own. A white woman urges the crowd to “confront racism in every single form in which it appears if we want to consider ourselves moral people,” from overt racist acts to subtler structural forms.

A woman reads a letter from Anthony Lamar Davis, a prisoner who has spent much of his time in the “Special Housing Unit,” or SHU, the Orwellian name given to solitary confinement practices that the New York Civil Liberties Union [PDF] calls “extreme isolation.” “I scream for help only to be ignored or in some cases, laughed at by the very people I have asked for help,” Davis writes.

The “Moral” framework that the organizers of today's event are using is drawn from the North Carolina movement, which began in 2013 to take back “moral” language from the right by challenging a far-right state Legislature on a variety of issues, from voting rights to abortion rights, teachers' jobs to fracking. Though New York state has a governor who is ostensibly a Democrat, its state Senate is dominated by Republicans and the governor has been unwilling to push for policies that would help the state's working class. And when it comes to mass incarceration, Angelica Clarke of the Albany Social Justice Center points out to Salon, prisons have been one of the only economic development plans offered by either party for upstate New York, effectively pitting poor communities that have seen their sources of income wiped out against the mostly black and brown people who are held in those prisons away from their homes.

“We're trying to create space where different groups who work on different issues can acknowledge the intersection of these issues, what they have in common,” Emily McNeill of Labor Religion Coalition of New York State tells Salon. Whether it be faith groups or union people who hold solidarity as a moral value or secular people who still believe in justice, she believes, “People are hungry for a way to express something different.”

The issues, Clarke points out, are more connected than many might think. If prisons are seen by struggling communities as a source of jobs, a plan for ending mass incarceration has to include not only solutions for the people currently in prison, but also for economic solutions for those who would lose prison work. “We need to make a connection to what an alternative economy would look like,” she points out. The efforts of people like her, who have been working on issues of justice around mass incarceration and prison abolition for a long time, are being boosted, she says, by the new attention brought from the Black Lives Matter movement; in turn, their work provides a framework for those coming to activism for the first time through Black Lives Matter to understand what they are up against.

As for the connections between North Carolina and New York, “There are more similarities than you think,” McNeill notes. “What we are dealing with is a government where both parties are controlled by hedge funds and Wall Street, which is not disconnected from the Tea Party groups [that exist in North Carolina], either.” What is at the base of both movements is the feeling that the people elected to office are not serving the interests of the people of their states. When they kicked off this year's Moral Mondays New York, Rev. William Barber from North Carolina joined them in Albany.

The list of demands that the organizers have prepared for today's event showcase the intersectionality of the event: They include “an immediate end to police brutality, broken windows policing and the murder of Black, Indigenous, and all oppressed people by the state and its agents,” and “the right for all people to self-identify and express their gender with freedom from violence, poverty and discrimination.” They demand Ban the Box, which would end discrimination in hiring and college applications against those with a criminal history, and the restoration of tuition assistance for incarcerated people. They demand the immediate release of elderly and infirm people from prison, and an end to long-term solitary confinement.

The demands include both long-term, utopian goals (end the war on drugs, full employment and living wages for all) and immediate policy asks (the HALT Solitary Confinement Act, the SAFE Parole Act, the Gender Expression Non-Discrimination Act). This is a growing trend among today's movements, which tend to have short-term goals as well as medium and long-term social changes in mind.

As Clarke says, what has grown from Black Lives Matter is an awareness of structural racism that is not limited to the South and not limited to overt acts. These movements then are demanding both short-term moves that will have concrete effects on the lives of real people, and a broader understanding that broad, systemic change is needed to really end inequality.

After the vigil in the War Room, the protesters walk up the capitol's famed “Million Dollar Staircase” to the office of Dean Skelos, Republican state Senate majority leader, to hand him their list of demands. After forming another circle and reading the demands out loud, person by person, in the hallway, they line up and bring their demands one by one into his office. As the last person deposits his piece of paper with his staffer and walks away, Skelos can be seen walking down the hallway toward his office.