Lindsey Graham's hilarious pitch: I don't use email because I'm too busy being *thoughtful*

"I've never sent an email" doesn't have to be a liability, but please don't try to make it an asset 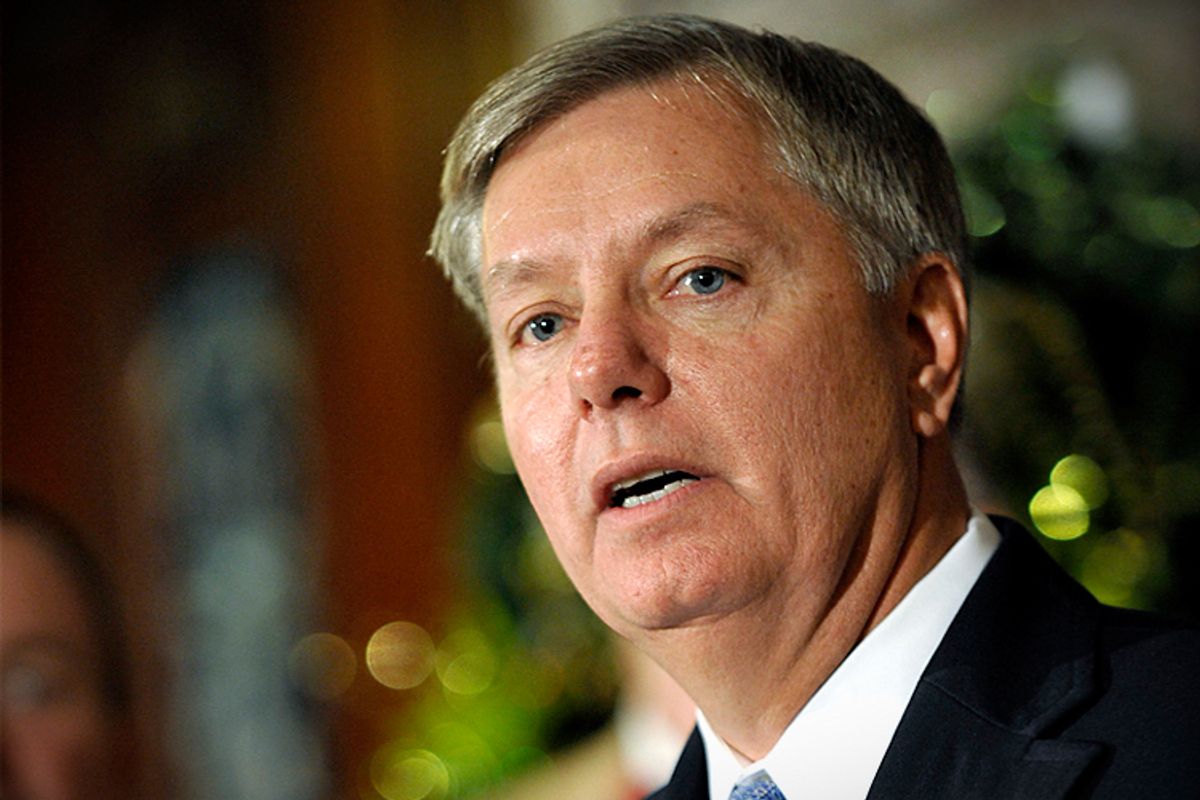 The freakout over Hillary Clinton's use of a private email account has avalanched to such an extent that now a prominent Republican is denouncing the medium of email altogether.

Senator and "potential presidential nominee" Lindsey Graham was on Meet the Press this weekend, as he is every weekend. No presidential candidate will offer greater email transparency than Lindsey Graham, Lindsey Graham said. "You can have every email I've ever sent," he said. "I've never sent one. I don't know what that makes me."

What that makes him is highly unusual. Lindsey Graham is 59 years old, and no one loves email more than a Baby Boomer. While some really old people have never sent an email because electronic devices terrify them, and some really young people have never sent an email because they perform all of their communications via Snapchat or SexFlop or whatever the hell is going on here, email is still Boomers' vehicle of choice. Most Boomers have used email hourly since 1992 to forward inappropriate jokes about priests and rabbis to each other, and there's no indication that they will ever have any higher technological aspirations.

Unusual, but not necessarily something that should be a political problem for him. The Washington Post's Philip Bump notes that Graham's comment set off a predictable geek freakout about how this man, who's never sent an email, sits on some subcommittee charged with overseeing technology. Bump rightly argues that knowledge of how to send an email is unrelated to knowledge of overseeing the tech sector.

Here's the thing about e-mail: Using it tells you very little about how the system works. It's one of the oldest communication systems on the Internet, one that still uses the term "CC:," which is short for "carbon copy." (Have you ever used carbon paper to duplicate a document? No? Well, here's how you do it.) E-mail is probably slightly more complicated than sending a text message, but not much. Sending an e-mail doesn't tell you about e-mail headers, or TCP/IP, or how to ensure your e-mail is encrypted or any of that. Suggesting that sending an e-mail tells you much of anything about how e-mail works is like suggesting that you are a pretty good mechanic because once you rode in a cab.

Lindsey Graham probably has no idea how any of that stuff works either, but it's unrelated to his habit of not emailing. (If we're to have any negative reaction to Graham's statement, it should be jealousy. "He can get by without e-mailing. We can't," Bump writes. "Given the sorts of e-mails we all get, our response might more legitimately be envy than scorn.")

That doesn't mean that never having sent an email is an asset, or something to go bragging about, or something to try, impossibly enough, to spin as indicative of one's larger character. But clumsily trying to force every little thing into a case for why you should be president is the most entertaining part of the nominating process. It produces such gems as Scott Walker arguing that he can defeat ISIS because he defeated 100,000 labor protesters in Madison. And Graham, following up on his comments to Bloomberg's Dave Weigel, argues that his email-free lifestyle is testament to his thoughtfulness and composure, his desire to toss aside the fleeting rage du jour and consider the bigger picture:

"What I do, basically, is that I've got iPads, and I play around," Graham explained. "But I don't e-mail. I've tried not to have a system where I can just say the first dumb thing that comes to my mind. I've always been concerned. I can get texts, and I call you back, if I want. I get a text, and I respond not by sending you a text, but calling you if I think what you asked is worthy enough for me calling you. I'm not being arrogant, but I'm trying to jealously guard myself in terms of being able to think through problems and not engage in chat all day. I've had a chance to kind of carve out some time for myself not responding to every 15-second crisis."

This is classic. Oh, sonny, he knows all about your iPads and text-message boxes. He's got The Machines, spends time with The Machines, likes The Machines, often entertains The Machines and their machine children during long weekends at his woodlands retreat. He gets your text message, digests it, and then calls you on the telephone if he considers you "worthy enough." This is just a lifestyle choice. He prefers to isolate himself from the short-sighted zipzap of modern life in order to Think. Much like Thomas Jefferson. A vote for Lindsey Graham is a vote for Thomas Jefferson!

This calm, reasoned, isolated Lindsey Graham is not the Lindsey Graham I'm familiar with. The Lindsey Graham I'm familiar with responds to every questionable adjective use or omission, from every political opponent or ally, with a media "hit" on whichever news program is willing to have him. Whenever someone dies in any foreign country, Thoughtful Lindsey Graham rushes out a statement arguing for a ground war in that country. Graham has some sort of magical ability to sit in on five simultaneous Hill hearings and plant a juicy soundbite in each one, over anything, to get himself on the news. The man issues a lot of currency, as they say. He's never needed to send an email because he's aired every thought he's ever had on camera.