Ted Cruz's "Menendez" favor: Why the wingnut tried to give an embattled Dem cover

As Sen. Bob Menendez sits in legal purgatory, an unlikely ally tried to rush to his rescue. Here's why 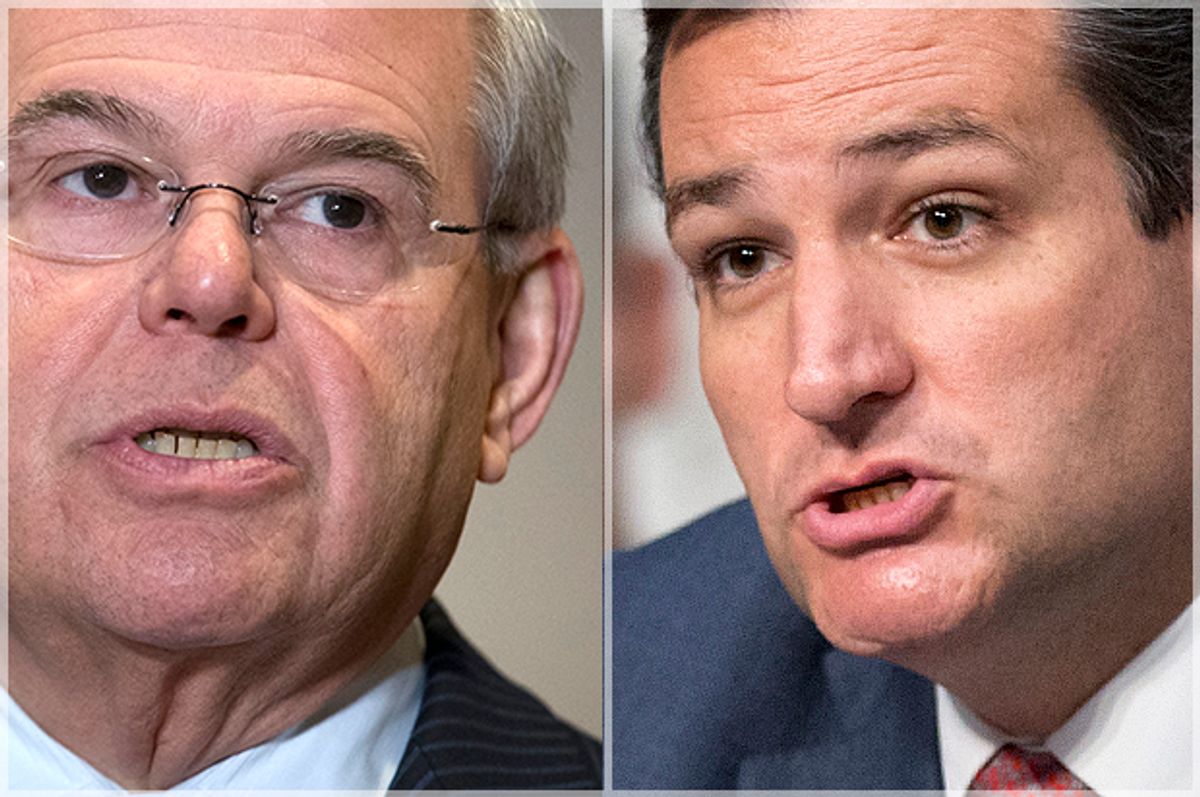 Late Friday Sen. Bob Menendez  was about as forceful as a man could be when he told reporters that he has always conducted himself “appropriately and in accordance with the law.” He took no questions but it was clear no pending federal investigation was going to force him out of office.

What’s shaping up is a shootout at the OK Corral, the K Street edition, with major geopolitical implications because of Menendez’s powerful post as ranking member of the Senate Foreign Relations Committee.

If Attorney General Eric Holder wants to charge Menendez with doing special favors for his personal friend Dr. Salomon Melgen, who plowed at least a million dollars into Menendez-related campaign committees, the New Jersey senator is going to argue that everything he did was entirely legal and just the way legitimate business is transacted in the nation’s capital. And that could be a case he can win.

Make no mistake, Menendez is the hero in his own spaghetti western. The more stacked the odds against him  the more enlivened he becomes. Shame is the emotion that’s felt only by dead men walking.  He can’t have done anything illegal because he embodies the law, and as his aides have argued in refusing to testify before a grand jury, a  senator can only be held to account for his legislative actions on the floor of the U.S. Senate. And evidently, in Menendez’s universe, pretty much any kind of advocacy, even off the Senate floor, falls under legislative action. It's kind of a bulletproof umbrella that follows him wherever he is.

Throughout his storied career, this tough Hudson County street fighter — "come get me" Menendez —  has always displayed that Clintonesque ability to beat whatever rap his enemies have trumped up.  Clinton axiom No. 1 is "reality is what you make it." Menendez got his first big boost by turning state’s evidence and throwing his mentor Union City Mayor Bill Musto under the bus when he testified against him in a high-profile corruption case. A few years after that he was mayor himself.

From the senator’s perspective he’s been to this rodeo before and as the chair of the Democratic Senate Campaign Committee from 2008 to 2011 helped raise hundreds of millions of dollars that helped his colleagues keep their jobs. Before that he was vice-chair for two years. That’s a whole lot of handshakes and smiles with all sorts of people with every kind of business interest under the sun on behalf of his colleagues.

A close read of recent history shows Jersey guys who have held this ultimate bundler spot for the DSCC were themselves apparently indemnified from criminal prosecution no matter how wacky their adventure. Who could forget Sen. Robert Torricelli’s taste in luxury goods or former Sen. and Gov. Jon Corzine’s challenges with numbers?

By the time Menendez is finished making his defense, Dr. Melgen could be just one guy in a crowd of thousands of people we will get to know who used their millions to buy time with the Democrats. His case could be pretty convincing—his advocacy for Melgen was just part of a normal day at the office at the greatest  and most expensive deliberative body on the planet. He could call other U.S. senators to testify how they spend their days making their sausage.

Back during the 2006 election, when Menendez faced off with Republican state Sen. Tom Kean Jr. for his Senate seat, details of a federal criminal corruption probe being conducted by then U.S. Attorney Chris Christie were leaked to the media. In turn reporters, so grateful for their streaming hot bowl of government innuendo, breathlessly reported that "it was going to be any day" that the feds were going to swoop down and take in "come get me" Menendez.

The allegation, which was widely published but never made on the public record, was that Menendez had benefited illegally from grants he had gotten from a Hudson County nonprofit that made campaign contributions  to Menendez and that also rented office space from him. In New Jersey we call that win-win.

Kean, the son of Gov. Tom Kean, just could not make any of it stick and Menendez beat him easily. Nobody came for Menendez.

Scroll forward five years and Menendez got the rarest of letters from a sitting U.S. attorney. On Oct. 24, 2011, Menendez’s lawyer got a note from the U.S. Attorney Zane David Memeger from the Eastern District of Pennsylvania telling him that “after review and consideration of the matter” the feds had “decided to close the file.” The U.S. attorney for New Jersey Paul Fishman had to recuse himself because Menendez had pushed for his nomination.

The same papers that reported his imminent downfall reported the perfunctory letter as an exoneration.

Part of Sen. Menendez’s good fortune has been the overzealousness of his shadowy enemies who keep overplaying their poker hand and seem to have the FBI on speed dial.  Case in point would be the January 2013 report in the Daily Caller that alleged the FBI was hot on the senator’s trail in the Dominican Republic for his alleged role in alcohol-fueled sex parties with underage prostitutes while he visited Dr. Melgen’s hacienda in the Dominican Republic. A few months later the Washington Post reported that one of the woman who had made a video statement saying the senator had paid her for sex actually told Dominican authorities she was paid to make up the claims.

The Hill reported that Sen. Ted Cruz, out in Iowa, capitalized on reports the New Jersey senator was going to be charged by the end of the month on federal corruption charges. Cruz accused the Obama White House and the Department of Justice of using the prosecution of Menendez as payback for the senator’s opposition to the White Houses nuclear negotiations with Iran.

“It raises the suggestion to other Democrats that if you dare part from the Obama White House, that criminal prosecutions will be used potentially as a political weapon against you as well,” Cruz said.

In spinning his conspiracy analysis Cruz told the voters that there had been an “announcement by the Justice Department that they were bringing charges against Bob Menende.z.  Cruz linked the “announcement”  as a direct consequence of  Menendez’s showing “incredible courage”  in “calling out President Obama for the damage he is doing to our national security.”

Only problem is, there was no such “announcement.”  It was much more ethereal — anonymous sources, presumably from within the Department of Justice, described only as “people familiar” with the case.

Driving this latest round of media speculation was the material from a court order from the U.S. Court of Appeals from the 3rd Circuit  that was supposed to be sealed but was posted online just long enough for the New Jersey Law Journal to get a copy and then the filing was put back under seal. Nice. More no fingerprints …

The NJLJ reported that the sealed papers included an order related to the legal controversy over the decision of those two Menendez aides discussed earlier to not answer questions put to them in front of a grand jury investigating the senator’s interventions on behalf of his friend and patron Dr. Salomon Melgen with the feds over  Melgen’s sky-high Medicaid reimbursals and a stalled Port Security contract Melgen had in the Dominican Republic.

In these kinds of feeding frenzy stories, it's always good for writer and reader to pause and ask,"How do I know what I know?" Consider how CNN a few months back promoted an upcoming  Discovery Channel segment in which naturalist Paul Rosolie was going to be eaten alive by a giant anaconda snake as legitimate news. (Never happened.)

It just seems passing strange that the media is comfortable running a story about the federal government charging the senator perhaps “sometime before the end of the month.”  And in the meantime, what?

Now hear this: This is not an announcement, but some kind of agenda-driven time-released speculation. Ultimately the senator may indeed be arrested, but in the interim we are being forced to live with a severely degraded due process that deprives the citizens of New Jersey full representation in the U.S. Senate.