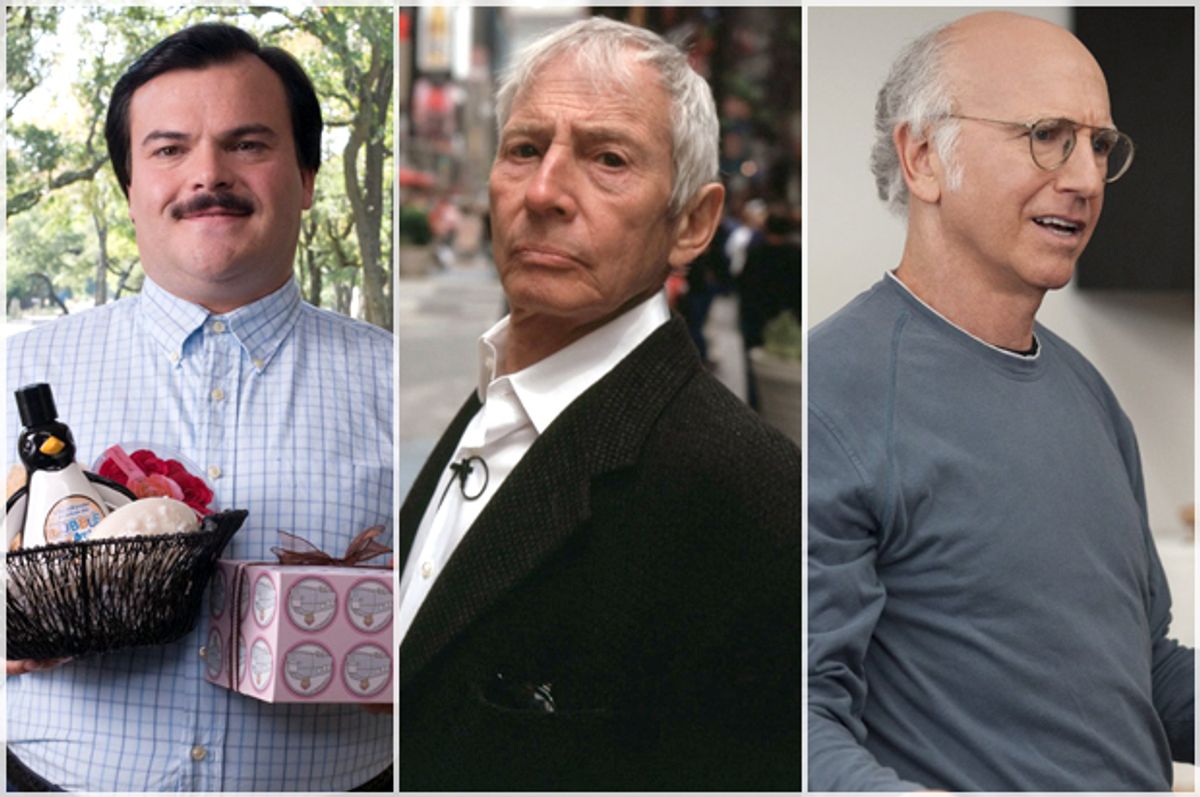 Jack Black in "Bernie," Robert Durst in "The Jinx," Larry David in "Curb Your Enthusiasm"
--

Yesterday it was revealed that the investigation into journalist Susan Berman's 2000 murder had been reopened, likely as a result of new evidenced aired on HBO "The Jinx: The Life and Deaths of Robert Durst," Andrew Jarecki's docuseries about the cryptic real-estate scion who is thought to have killed Berman along with two other murders. While it remains to be seen whether the long arm of the law will ever catch up to the wily Durst, it is an example of art's ability to affect real change in the courts. Here’s a look at some of the other times the boundary between art and the legal system have blurred.

"Serial"
After Sarah Koenig's podcast about the Adnan Syed case set the nation abuzz, Syed was granted leave to appeal his conviction for the 1999 murder of his high school ex-girlfriend Hae Min Lee. The appeal was granted on the grounds that Syed may have received ineffective counsel from his original lawyer Cristina Gutierrez, whose shrill drawl will be recognizable to anyone who tuned into Koenig's podcast. The case will be heard at the Maryland court of appeals in June.

"Curb Your Enthusiasm"
Not the show you’d expect to save a man from death row, but alas: An episode of Larry David’s HBO sit-com confirmed the alibi of a California murder suspect after he was seen in crowd footage of an LA Dodgers game. The wrongly-accused man had been in jail for five months when the footage was discovered. "I'm quitting the show,” David joked afterwards. "To devote the rest of my life to freeing those unjustly incarcerated.

"Paradise Lost"
The documentary “Paradise Lost: The Child Murders at Robin Hood Hills” chronicled the story of “The West Memphis Three,” Damien Echols, Jason Baldwin and Jessie Misskelley, who were accused of murdering three cub scouts when they were teenagers. While the film didn’t directly lead to their release, it garnered major attention for the case, prompting two "Paradise Lost" sequels, a number of other films and books, charity concerts, celebrity activism, and a whole movement advocating for their innocence. The men were finally released in 2011.

"The Thin Blue Line"
Errol Morris’ critically acclaimed 1988 documentary about Randall Adams, who was wrongfully convicted and sentenced to death for murdering Dallas police officer Robert Wood in 1976, is widely credited as a main impetus in helping to bring about Adams’ release one year later. The movie paints a vivid picture of Adams’ innocence — as well as suggesting that a number of witnesses in the original trial perjured themselves — and the uproar that it caused led to the judge issuing another trial.

"Capturing the Friedmans"
Before the Jinx, Jarecki was nominated for an Oscar for 2003’s “Capturing the Friedmans,” a documentary about a Long Island father and son — Arnold and Jesse Friedman— who were both convicted of child molestation in the 1980s. After the film came out, Jarecki became a strong advocate for Jesse Friedman’s innocence, turning over pages of research to the Nassau County DA’s office. Even after the DA found that Jesse had not been wrongfully convicted following an intensive three-year probe, Jarecki continued to advocate for his innocence.

"Bernie"
After Richard Linklater’s sympathetic portrayal of murderer Bernie Tiede in his film “Bernie,” there was a flurry of renewed interest in the man’s case, as new lawyers signed onto the case and revealed new psychological evidence that ultimately allowed Tiede to walk free. Shanna Nugent, the granddaughter of Tiede’s victim, Marjorie Nugent, blames the Linklater film for setting  convicted killer free. "It really feels like to me Hollywood has taken over the Texas criminal justice system,” she told the Dallas Observer. After he was released, Bernie moved into Linklater’s garage.