Parker Rice says his actions don't reflect his values -- but then what does? 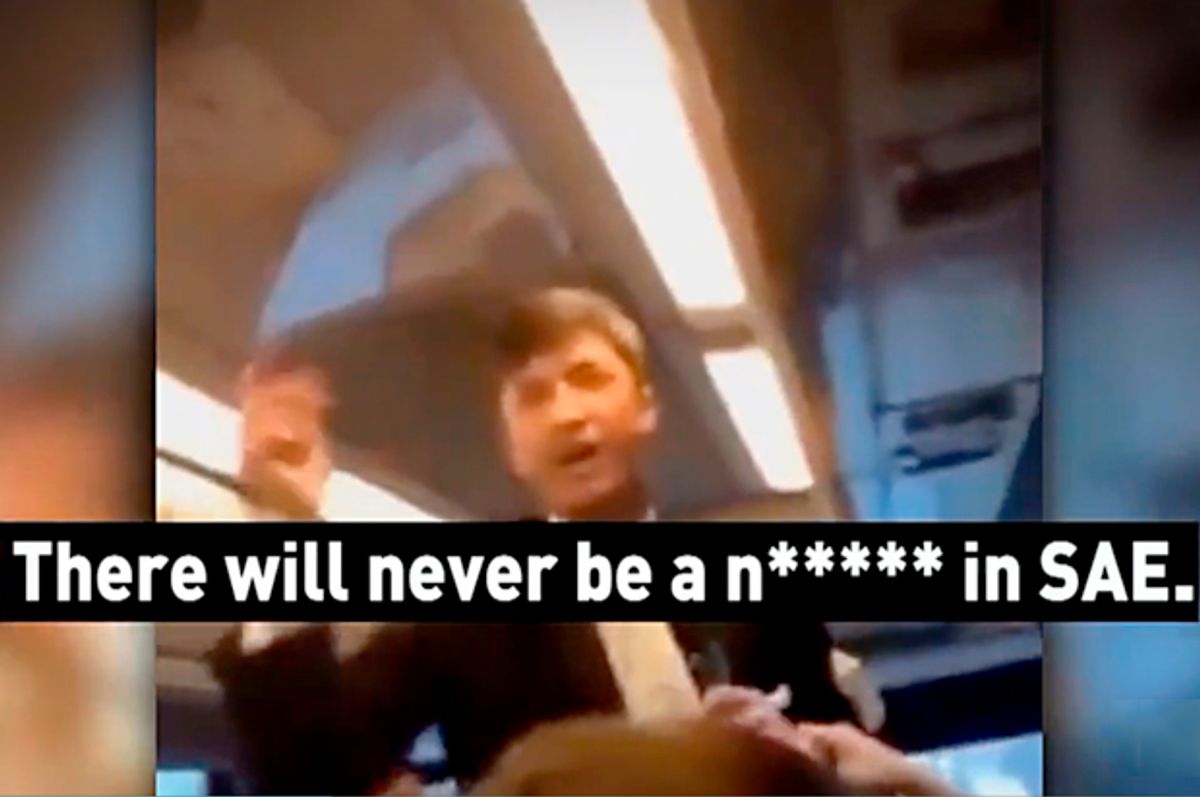 It's difficult to imagine that a few days ago, Parker Rice might have been a young man troubled with guilt or shame about any of his fraternity related activities. It's unlikely he had looked into his soul and asked himself how he could have participated in chanting racial slurs and references to lynching. Now, however, he says he's sorry for his behavior. Now he says he wants to be a man of "heart and courage."

A lot has changed in Rice's life since a 9-second video of a group of well-dressed Oklahoma University students was posted Sunday by Unheard, an OU black student group. In it, Rice can be seen leading a chant that vowed, "There will never be a n____r SAE. You can hang 'em from a tree." The university moved swiftly and decisively as soon as the clip went public, closing the fraternity's chapter and expelling Rice and another student, Levi Pettit. In a statement, University President David Boren called the young men "disgraceful."

Yet the young men involved in the incident don't seem to see themselves that way. The parents of Levi Pettit have issued a statement apologizing for his behavior but asserting, "He is a good boy, but what we saw in those videos is disgusting. While it may be difficult for those who only know Levi from the video to understand, we know his heart, and he is not a racist." At least Rice himself issued his own apology, calling his behavior "wrong and reckless" and saying, "I know everyone wants to know why or how this happened. I admit it likely was fueled by alcohol consumed at the house before the bus trip, but that's not an excuse. Yes, the song was taught to us, but that too doesn't work as an explanation. It's more important to acknowledge what I did and what I didn't do. I didn't say no, and I clearly dismissed an important value I learned at my beloved high school, Dallas Jesuit. We were taught to be 'Men for Others.' I failed in that regard, and in those moments, I also completely ignored the core values and ethics I learned from my parents and others." He adds that "My goal for the long-term is to be a man who has the heart and the courage to reject racism wherever I see or experience it in the future." The Dallas Morning News says that Rice's friends insist he's "a good guy and NOT a racist."

I don't want to believe anyone is beyond redemption, so I would like to think that Parker Rice may indeed be capable of some profound soul searching and growth. But what many of us who've been following this story – and maybe Rice himself – can't understand is how someone who claims to have been raised with "core values and ethics" could do such a thing and do it without remorse until remorse was forced upon him. Think of the worst things you've ever done in your life. The things you feel the most shame and pain about, the meanest acts you committed. Didn't you pretty much know, going in, that you were consciously choosing to do something hurtful and wrong? Didn't you feel that pang in the pit of your stomach even as you went full steam ahead? Because even when we do wrong, most of us recognize wrong.

Did Parker Rice ever have that feeling? If his misdeeds had not been exposed, if Parker Rice were at this moment sitting around with his buddies at the frat house planning their next party, what do you think the odds are that he'd be devoting one iota of his introspection to considering whether chanting brags about keeping that frat free of individuals he calls n_____s was in line with his "values?" I think Parker Rice doesn't have the moral fortitude he thinks he does. Despite what his friends say, he should know that if you're chanting racial slurs, that makes you a racist. And sorry, mom and dad, but Levi Pettit is not the good boy you think he is either. Your values are not just what you believe. Your values are how you behave.

But likewise, the people who have, according to Rice and those close to him, have been targeting him and his family are not good people either. Rice says that "Sadly, at this moment our family is not able to be in our home because of threatening calls as well as frightening talk on social media…. I am also concerned about the fraternity friends still on campus. Apparently, they are feeling unsafe and some have been harassed by others." If you want to use one person's bad behavior as a jumping off point for your own, you get zero moral high ground. Zero.

It may well be that as Rice was merrily chanting his racist slurs, he was in no way thinking of real human beings who endure discrimination and violence every day. And maybe the people threatening his family don't see them as people either. The concepts are too abstract, while kneejerk ugly talk feels so much more tangible. But when you let yourself forget the hurt and fear that your words can cause, you are a deeply disconnected individual. And the question then isn't whether you're betraying your morals. It's whether you ever had them in the first place.