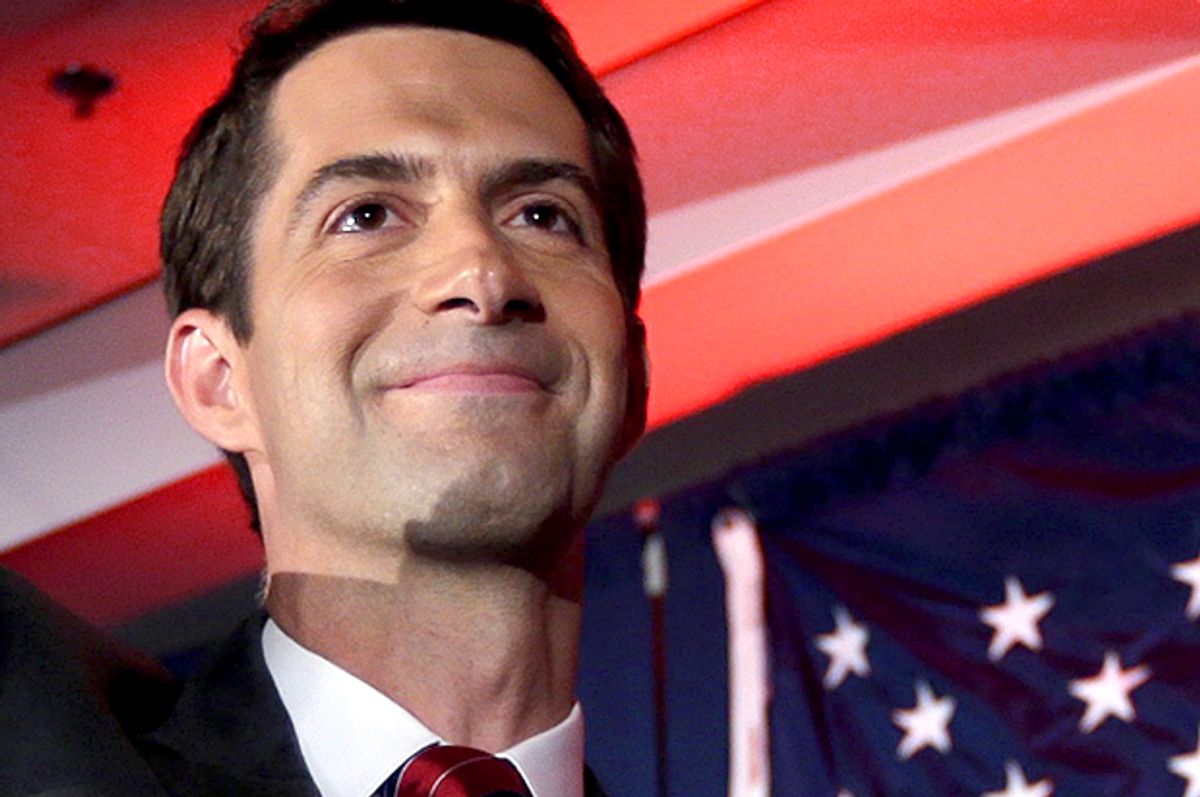 As readers of my colleague Jim Newell know by now, Tom Cotton, Arkansas’ new GOP senator, is already establishing himself as one of the leading doomsayers and fearmongers in Congress, which is no small feat. Indeed, by acting as the driving force behind a provocative open letter to the leaders of Iran and helpfully informing them that any deal reached with the Obama administration over their nuclear program will ultimately be subject to the Senate’s review, Cotton has already made himself a hero to the neoconservative right. In fairness, though, that wasn’t the hardest thing to do: Cotton’s earlier warnings of a (completely fictional) alliance between Mexico’s drug cartels and ISIS, as well as his rant in defense of Guantánamo Bay, had endeared them to him already.

But while Cotton is making the media rounds and hoovering-up donations from Bill Kristol and the military industrial complex, I think it’s worthwhile to revisit a discussion that was bouncing around the left-wing corners of the Internet last week. The topic was the inherent, structural flaws of the U.S.’s presidential system — which is rickety and slow in the best of times and downright unstable in the worst — and how they were becoming increasingly hard to ignore in our era of party discipline and polarization. Because even though I don’t believe Cotton and his letter represent a constitutional crisis as some of President Obama’s allies have suggested (and is certainly not an act of treason), I do consider the freshman senator’s recent behavior to be a good window into how the presidential system’s flaws can manifest in the real world.

However, before we look at Cotton more closely, let’s do a quick and dirty recap of one of the presidential system’s more common critiques. As readers of the late political scientist Juan Linz (or Vox’s Matt Yglesias) remember, one of the issues that can arise when a presidential system features disciplined and ideological parties is a crisis of sovereignty. That’s a fancy way of describing an argument between the executive and the legislative branches over which one is really in charge. Since they exist independently, and were empowered by voters through separate elections, both can claim to represent the will of the people. And if the two branches find themselves on opposite sides of a major dispute, push can come to shove — and worse.

Applying this model to the current foofaraw over Cotton’s letter isn’t a slam-dunk, but it is still edifying. In this case, the problem is that Cotton and his fellow signatories are mucking-up the conduct of President Obama’s foreign policy, which has traditionally been seen as constitutionally (and normatively) protected. Congress always has a role in foreign policy, of course — even if recent history indicates it to be shrinking. Usually, a president is left to negotiate a deal that he then presents to Congress for approval. But Cotton and his Republican allies in the Senate are so dead-set against an agreement of any kind with Iran that they’re trying to squash the deal upfront instead.

The end result seems to be the further dissolution of what was once an unwritten rule — “politics stops at the water’s edge” — in the name of some greater good. And this is where ideology comes in. Because it’s hardly as if Congress has never disagreed with a president’s foreign policy this strongly before. They have, as the representatives and senators elected during the worst days of the Vietnam War can attest. What is different, though, is the tenor of their arguments, as well as the dispute’s supposed stakes. Hysterical warmongers like Cotton have always been with us — but rarely before have people with such radical views held so much power within either party’s caucus.

Keep this in mind about Cotton: Unless he’s an actor of Daniel Day Lewis-like talents, he sincerely believes that the consequences of a nuclear Iran would be apocalyptic. He’s said dozens of times that the only deal with Iran he’d accept is one that resulted in complete nuclear disarmament — which, as Think Progress’s Igor Volsky noted, is a demand that even the George W. Bush administration considered ridiculous. He also seems to be under the impression that Iran is even more dangerous than it is, agreeing as he does with Israel Prime Minister Benjamin Netanyahu’s claim that Iran is on the verge of going nuclear. The fact that Netanyahu’s been saying this for more than a decade, and that his own country’s leading intelligence agency disagrees, has apparently not made much of an impression.

Regardless of how broken Cotton’s assessment of the Iranian threat may be, though, he’s still a U.S. senator. And as his letter notes with a characteristic lack of subtlety, Cotton and his fellow members of the Senate are quite likely to stick around (for “perhaps decades”) while the term-limited President Obama isn’t. Which means that so long as Cotton and his allies believe a deal with Iran over its nuclear program will lead to a second Holocaust, or will strengthen Iran’s hand in its “war” with “the West,” then the kind of norms of conduct he’s breaking — like not trying to sabotage a sitting president’s foreign policy — will continue to fade into irrelevance. And so long as right-wing donors and the voters in Arkansas reward him for challenging the president’s sovereignty, while the media allows him and his allies to muddy the waters with specious claims that Obama is the one breaking protocol, he’ll have no reason to act any other way.