"The Fall" renewed for season 3: Why the subversively feminist crime drama is one of the best thrillers on TV 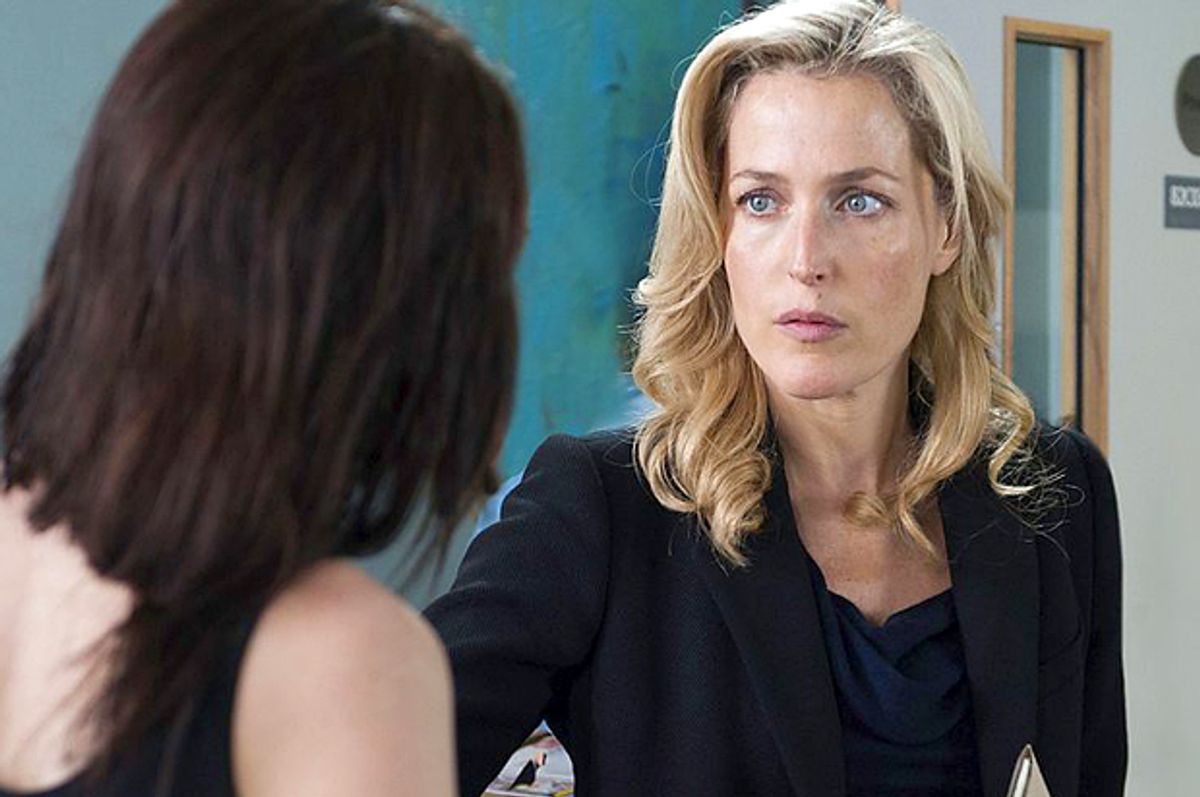 BBC2 announced yesterday it will renew its crime show The Fall for a third season. That's happy news to those who found its Season 2 cliffhanger more than a little unresolved — not to mention fans who can’t wait for the second "50 Shades of Grey" movie to see Jamie Dornan playing a controlling stalker. Not only is Dornan far more compelling as a serial killer in "The Fall," the show has a remarkably feminist agenda beneath all those female corpses.

Detective Superintendent Stella Gibson is played by The X-Files’ Gillian Anderson at her steely best—Scully without all that annoying skepticism. She's been brought in from London to Belfast, Ireland to work on a murder case that Stella believes reveals a serial killer at work, though she must convince her superiors this is the case. Stella is decidedly a woman in power, striding through Belfast’s gloomy cement streets in silk blouses and heels, raising one sleek, impatient eyebrow at the fumbling actions of others (often men), and confidently in charge at work and the bedroom, which she never lets her male counterparts forget.

What makes "The Fall" unique to crime dramas, where the murder victims are mostly women, is Stella’s modus operandi: she never seeks male approval and behaves in ways the men around her seem to believe is only their domain, while calling them on their sexism. Early in Season 1, she takes a handsome young detective, James Olsen, as a lover by whispering her hotel room number to him at a crime scene. After sex with him (notably, she’s also on top) she flouts the feminine stereotype and refuses his entreaty to stay for a post-coital cuddle. Later, when Olsen meets an untimely end, and her boss, Detective Inspector Jim Burns, with whom she has also had an affair years before, coldly points out that Olsen was a married man, she throws back, “You were a married man when you spent a night in my bed.” She delivers this salvo, as all others, with very little display of emotion, her blue eyes cool on him as he squirms beneath her gaze.

Stella continually parses out semantics that seek to portray women badly. When going over what the police plan to say at a press conference to address the latest murder, she tells Burns to strike the word “innocent” from their description of the victim. “But she is innocent,” he insists. Once more she lasers in on him. “What if he kills a prostitute next?” she demands. “Or a woman walking home late at night drunk in a short skirt? Will she be less innocent? The media loves to divide women into virgins and vamps, angels or whores; let’s not encourage them.”

Later, when Detective Eastwood grills her unnecessarily over the death of her one-night stand, she finally cottons to his intention, eases comfortably in her chair and turns chilly, “That’s what really bothers you, isn’t it? The one night stand…woman fucks man, woman: subject, man: object. Not so comfortable for you, is it?” These calmly delivered quips show a woman who doesn’t put much store in what men think of how she conducts her sexuality. She continually calls Burns on his assumptions; whether he’s questioning her morality or bullying his way back into her bed (she must resort to punching him to fend him off), Stella points right to the lines he feels comfortable crossing and stands her ground, refusing to let him rewrite reality.

But as much as Stella behaves like a man in her comfortable wielding of power and sexual control, like most women, she lives with the full awareness of the inequality and danger that lurks in any unknown man. When a young detective, another of her sexual conquests, accuses her of being attracted to the serial killer, Spector, she quotes Margaret Atwood’s dystopian novel "The Handmaid’s Tale": "Men are afraid that women will laugh at them. Women are afraid that men will kill them."

And the murderer in question, Paul Spector (played with Ted Bundy-esque charm by Dornan), is the most terrifying sort of misogynist: He is Hollywood handsome, with a sociopath’s ability to charm and fool the women he murders. Even more horrifying, he’s a social worker by day, counseling women with false concern while scribbling murderous sketches in his notebooks.

"The Fall" is staunchly pro-woman in many of its subplots and in other strong female characters, powerful foils against which Gibson’s autonomy resounds. From her friendship with female pathologist Reed Smith, who exudes a radiant intelligence, and with whom Stella has sexual chemistry, to Officer Danielle Ferrington, an out lesbian who has Stella’s back. The weakest female character in the show is painted so on purpose; 15 year-old Katie Benedetto, the babysitter of Spector’s two young children, is easily manipulated by Spector, becoming the Squeaky Fromme to his Charles Manson. Even his cuckolded wife Sally gains strength to leave once she knows what he’s capable of (even if she thinks he’s only cheating).

Stella’s power is not anti-man; she seems to have just made a conscious decision not to placate them, and maybe viewers will get a taste of her back-story in this possibly final season. More so, hopefully Season 3 will not only reveal the fate of Paul Spector, who lies gasping in Stella’s lap at the end of Season 2, but continue to cover feminist ground. For that to happen, it’s not necessarily the female characters who need to grow. A crime show in which men become aware of, and change, their sexist behavior without the women having to point it out would be remarkable, indeed.

Jordan Rosenfeld is author of six books, most recently "A Writer's Guide to Persistence." Her work has appeared widely in AlterNet, DAME, the New York Times, STIR Journal, the Washington Post and more.