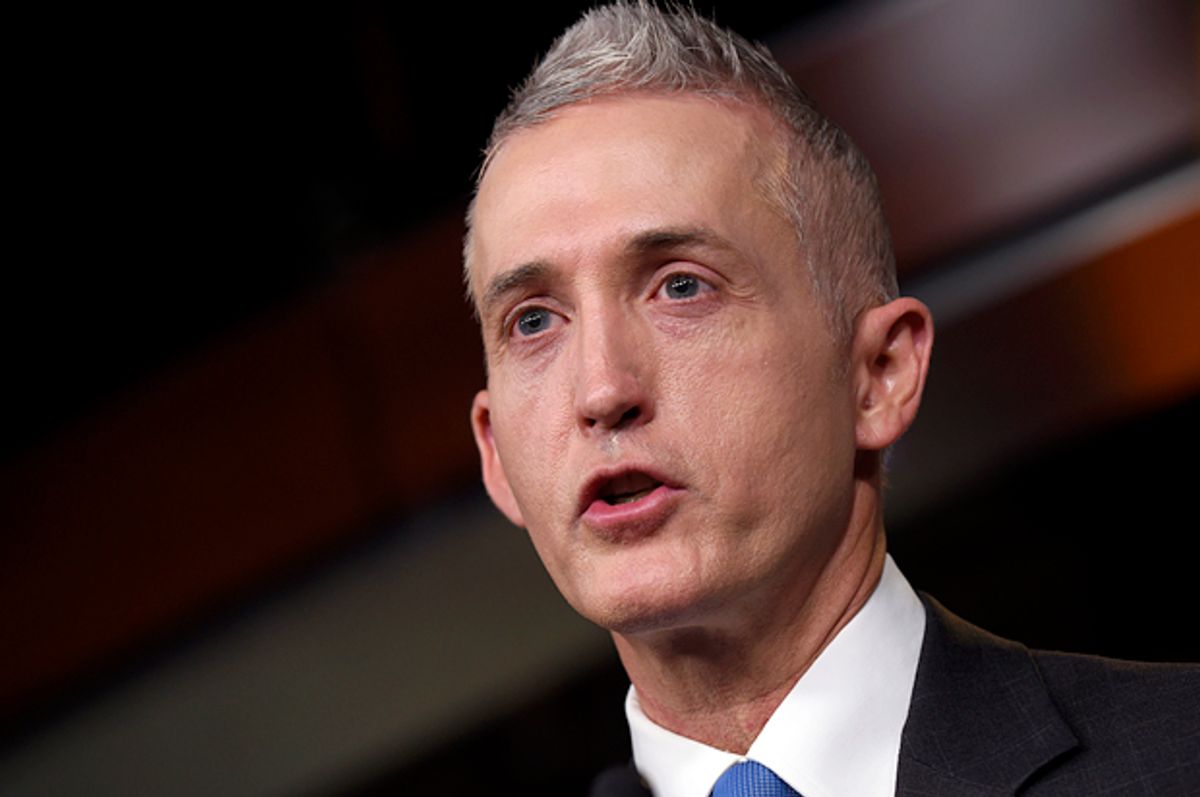 The House Select Committee on Benghazi has been up and running for about 10 months now, and for most of that time it hasn’t made a great deal of progress in uncovering the sprawling cover-up conspiracy that conservatives insist they can see when they close their eyes. Committee chair Trey Gowdy has held three hearings: two dealing with the State Department’s implementation of recommended security measures in the aftermath of the attacks, and one dealing with the timeliness of executive branch responses to the committee’s requests for documents. Conservatives who were expecting Gowdy to bring his prosecutor’s zeal to uncovering THE TRUTH about Benghazi have been left disappointed.

Over the same time period, Gowdy has faced a number of setbacks. One month after the committee was formed, the U.S. captured the alleged ringleader of the Benghazi attacks, thus depriving Gowdy of a line of inquiry and a favorite talking point. A few months later the House Permanent Select Committee on Intelligence released its own report on Benghazi, which came to the same conclusions as every other investigation into the attacks: no conspiracy, no cover-up.

And then this Hillary Clinton email story came along. Per the original New York Times story, “the existence of Mrs. Clinton’s personal email account was discovered by a House committee investigating the attack on the American Consulate in Benghazi as it sought correspondence between Mrs. Clinton and her aides about the attack.” All of the sudden, Trey Gowdy has something to talk about. And to capitalize on it as best he can, he’s apparently going to expand the committee’s investigation and take personal charge of the matter. The House Benghazi Committee is now turning into the Trey Gowdy vs. Hillary Clinton show.

After Clinton’s press conference yesterday, Gowdy, in his capacity as chair of the Benghazi committee, put out a statement saying that he would call on Hillary to testify about her email practices. “Secretary Clinton alone created this predicament, but she alone does not get to determine its outcome,” the statement read. “These public records at issue are broader than Libya and broader than Benghazi.” That very well may be the case, but the committee he chairs is tasked with focusing specifically on Benghazi, Libya. Gowdy also says he’s concerned about the “security of the system she employed” and “who authorized this exclusive use of personal email.” Those are fine concerns to have, but we’re getting pretty far afield from the committee’s mandate. It’s starting to look like a classic case of mission creep, reminiscent of the Whitewater probe that spilled over into every aspect of the Clintons’ personal lives.

It makes sense for Gowdy to do this from a political standpoint – Republicans and the press have an insatiable hunger for Clinton “scandals” and going up against Hillary as we lurch into the 2016 election season will turn him into a conservative folk hero. But doing it as part of the inquiry into Benghazi has huge risks, particularly when you go back and review all the times Gowdy has decried the politicization of “the murder of four Americans.”

Apparently he’s sensitive to these concerns, which is why he’s making the Clinton hunt his personal project while the rest of the committee continues on with its Benghazi work. Politico reported this morning:

Gowdy is pushing on two tracks: He is going after the full Clinton email trove, while his staff and other committee members continue interviewing witnesses involved in the actual Benghazi attacks. The dual-track approach will allow Gowdy to rebut Democratic charges that the select committee has lost focus, while allowing him to exploit a potential gold mine for Republicans — and transform his own political future.

I’m not sure how the chair of the Benghazi committee can claim his committee hasn’t lost focus when he’s off pursuing a matter that, by his own words, is “broader than Benghazi.” Democrats on the committee are already needling Gowdy for pushing his investigation off in new directions for political gain. “I hope the Benghazi Select Committee will return to its purpose of investigating the attacks in Benghazi instead of attempting to impact the 2016 presidential election,” ranking member Elijah Cummings said in a statement. Rep. Adam Schiff, Democrat from California, was even less charitable: “After ten months, the GOP led committee still has no answer to the question – as it pertains to the Secretary's emails or anything else – just what are we looking for?”

No one seems to know the answer to that question, but Trey Gowdy will investigate Hillary Clinton for as long as is required to find out.