"It Follows": An instant horror classic about the dark side of teen sex

A realistic portrait of suburban teen existence haunted by unexplained evil, "It Follows" is a genre breakthrough 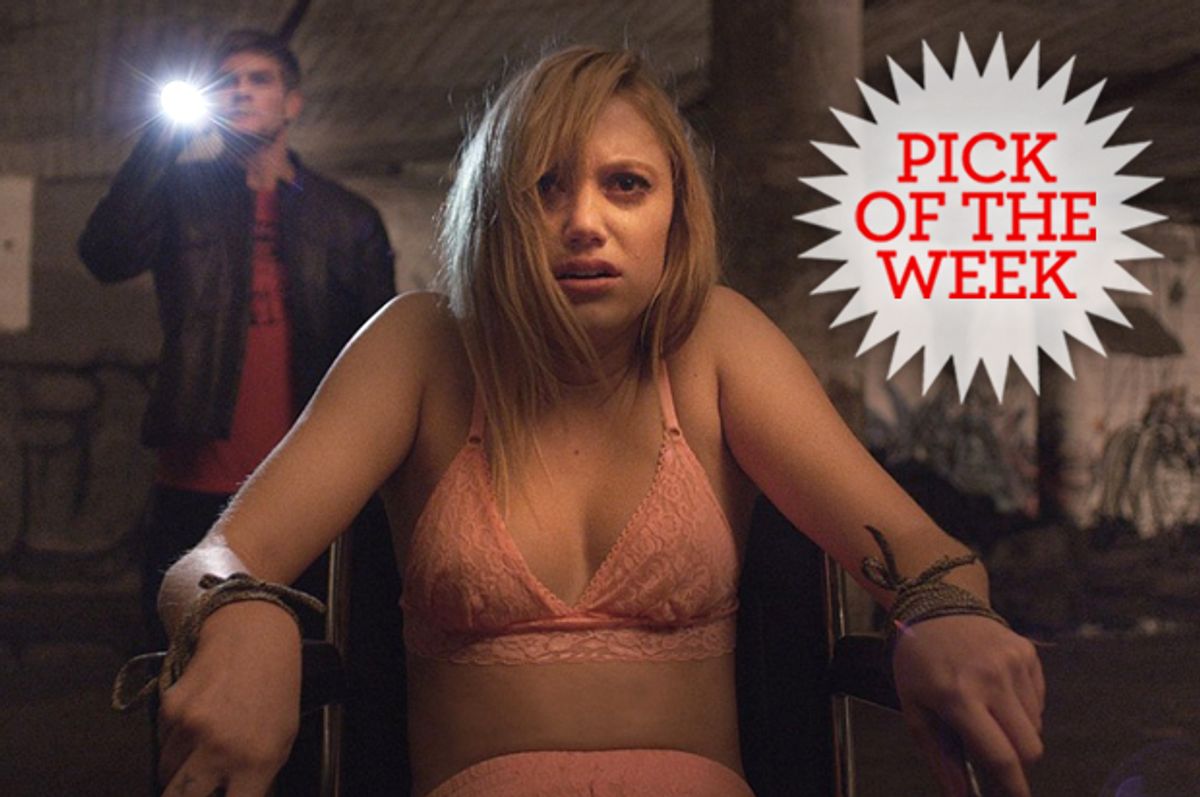 Jake Weary (left) and Maika Monroe in "It Follows."
--

David Robert Mitchell is a young American filmmaker with a remarkable and perhaps self-consciously old-fashioned command for the medium. He made his debut four years ago with an exquisite summer’s-end teen romance called “The Myth of the American Sleepover,” which was one of my favorite films of 2011 but never broke free of the dwindling indie niche audience. I don’t know whether to call Mitchell’s second-film strategy cynical or brilliant; it might be both. With his justly acclaimed horror movie “It Follows,” which features a riveting opening sequence that will freak you the hell out, Mitchell has essentially made the same movie again, translated into a different genre. This too is a tender tale of loneliness and heartbreak in the middle-class suburban belt just outside Detroit, but with a teen-slaughtering, sexually transmitted demon occasionally showing up to snap the characters’ legs off.

On the rare occasions that young filmmakers ask me for advice, I tell them that one small corner of their brain must be reserved for the perspective of a moronic but market-savvy Hollywood executive: How can I sell this thing? What’s the seven-words-or-less tag line that makes my movie jump out of the clutter? Mitchell appears to have absorbed this advice from his “American Sleepover” experience. “Achingly realistic teenage rom-com” provoked a collective cultural yawn, so he reworked that into “super-scary and surprisingly well-made horror flick,” and the difference is obvious. Both “It Follows” and “Sleepover” premiered in the Cannes Critic’s Week, so Mitchell hasn’t lost his Euro-cinephile appeal. I might be willing to argue that “Sleepover” is a better film on formal grounds, but “It Follows” touches a nerve and fills a need in a way that "Sleepover" did not – and it might get him paid, which is not a crime.

There are already some signs of horror-fan backlash against “It Follows” discernible on the Internet, and while I think those complaints belong in the “Haters Gonna Hate” circular file, what those people see is real: Mitchell uses his shambling, relentless and possibly allegorical monster as a cloaking device for something that may not be a horror movie at all. Without wandering too far afield, one could make similar claims about the suburban horror classics Mitchell uses as touchstones, like Wes Craven’s original “Nightmare on Elm Street” or John Carpenter’s “Halloween.” Nonetheless it’s true that the social world of Mitchell’s suburban Detroit, with its modest brick houses, aboveground swimming pools, aimless afternoons and card games on the porch, has a level of naturalism and a leisurely pace you don’t find in Craven or Carpenter.

That said, “It Follows” pretty much earns its buzz as the scariest and best-engineered American horror movie of recent years, and that’s all down to Mitchell’s sophisticated understanding of technique and the trust and freedom he accords his youthful cast. From the very first frames of the movie – do not get there late! – he builds a terrifying atmosphere through the meticulous use of sound (both music and sound effects), widescreen image and shifting perspective. On a quiet street in early evening, as placid and all-American a setting as could be imagined, something is deeply wrong and we don’t know what. A young woman, wearing an odd assemblage of clothing she clearly pulled on in a hurry, rushes in and out of her house in an obvious panic, fleeing from something we can’t see, all while assuring her neighbors and her dad that everything is OK and she’s fine. So very not OK and not fine! I almost wish the whole movie had the unexplained psychotic-delirium feeling of that sequence, except then it would be something entirely different, like the Detroit sequel to Michael Haneke’s “Caché,” and only obnoxious people like me (and maybe you) would want to see it.

I keep mentioning the setting for “It Follows” because it seems highly relevant, and may hold a key to what the movie is “really” about – if you’re willing to roll with the obnoxious premise that it’s not really about a slow-moving monster who murders teens for being promiscuous. When our teen heroine, a young woman named Jay (Maika Monroe), goes in search of the mysterious older guy who has apparently given her the worst STD of all time, she and her friends cross the invisible but important boundary between Detroit and its suburbs, entering the haunted realm of abandoned houses and empty lots where Hugh or Jeff or whatever his name may be (Jake Weary) has been hiding out. Jay and her posse talk about the fact that their parents unanimously view the city of Detroit as a no-go zone, but they never mention why that’s the case, nor do they observe that their little universe consists entirely of white people.

One could criticize Mitchell on representational grounds, I suppose, but that’s not at all my point. I have no reason to view his depiction of life beyond 8 Mile Road as implausible, and furthermore it seems likely that the exclusion is deliberate and symbolic. Here comes a minor spoiler, but an entirely negative one, I promise: Some horror fans accustomed to the usual scene of second-act explication about the secret book or long-ago murder will be frustrated by “It Follows,” which never provides any origin story for the shape-shifting pedestrian entity that shifts its malevolent attentions from Hugh/Jeff to Jay after they have sex. It follows you and will not stop; it only walks and cannot fly or teleport or time-travel; it has a physical form but only you (and the people before you in the chain of transmission) can see it. “It’s slow but not stupid,” as Hugh tells Jay, and if you don’t pass it along by doing the nasty with someone else, it will catch up to you eventually.

There are distorted but obvious images of several real-world issues in “It Follows,” including acquaintance rape, teen suicide and mental illness, but you can’t boil the movie down to any of those things any more than to a metaphorical treatment of Detroit’s social and racial divide. What is the Follower? (A name applied by other reviewers, but never within the movie itself.) A force of congealed or overdetermined evil, distilled from multiple factors or none at all, that robs you of sleep, isolates you from friends and family and poisons your relationships with others. Even Mitchell can’t resist the compulsion to treat this agent of guilt and fear and shame and disease in an overly literal-minded fashion during an OK Corral-style final showdown. At that level, there are some problems: What if you hop a jet to Europe or Australia? It’s going to take a really long time to get to those places on foot! But for most of its running time “It Follows” is a work of memorable subterranean power, and some of its moments will haunt your dreams for years to come.