Madonna declares blacks and gays are doing better than women 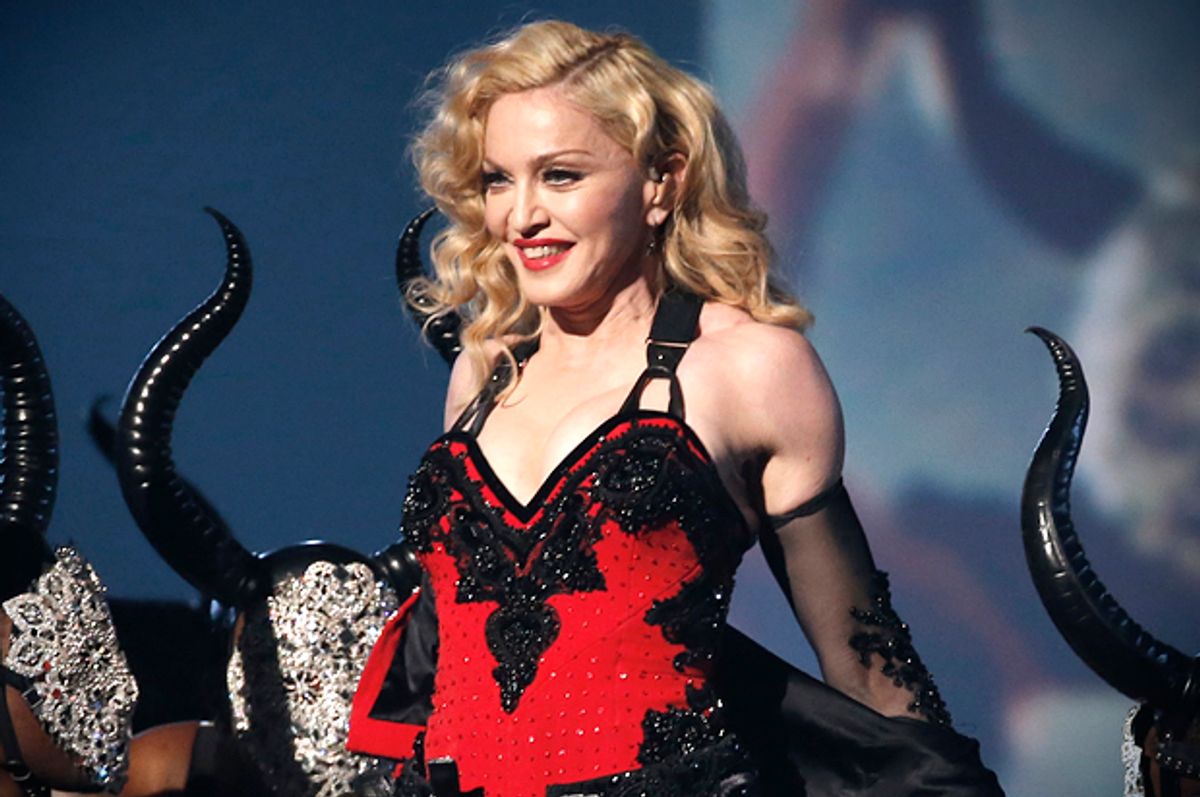 Madonna, as her recent publicity blitz for her new album "Rebel Heart" would eagerly like to remind you, is an icon of the gay community and a woman who has had relationships outside of her own race. Neither of those things, by the way, qualifies her as an expert on which minority group – African Americans, gays, or women – has made the most progress and which has the toughest time. But hey, don't let that stop you, Madge.

In an interview this week with Out, Madonna describes her early years of her career, recalling, "I didn't feel like straight men understood me. They just wanted to have sex with me. Gay men understood me, and I felt comfortable around them. There was only that one problem, which is that they didn’t want to have sex with me! So…conundrum! I was like, 'How am I ever going to get a date? Maybe if I cut my hair and I lose a lot of weight, someone will mistake me for a guy and ask me out.'" And she rather decisively observes, "Gay rights are way more advanced than women’s rights. People are a lot more open-minded to the gay community than they are to women, period… It's moved along for the gay community, for the African-American community, but women are still just trading on their ass. To me, the last great frontier is women. Women are still the most marginalized group. They're still the group that people won't let change." Hoo boy.

As a professional uppity feminist, I'm certainly not going to argue that women have an easy time of it in this world. These are not easy days if you care about reproductive freedom or bucking the endless tyranny of "having it all." And if you care about justice for sexual assault, you probably feel like banging your head against a lot of the time -- a frustration that Madonna, a rape survivor herself, probably feels very keenly. On Howard Stern's show Wednesday, she recalled being raped at knifepoint when she was 19, and said she didn't bother reporting the incident because "You've already been violated. It's just not worth it. It's too much humiliation." Nearly thirty years later, rape remains a shockingly underreported crime.

But in case Madonna hasn't noticed, it's not exactly a slam-dunk for LGBT progress. As a recent case of Michigan proved, in most states, pediatricians can still refuse  to treat patients based on the orientation of a child's parents. LGBT kids are still bullied and shunned – it's no coincidence they're twice as likely to attempt suicide as their straight peers. It's not a shining moment for racial progress lately either, what with the multiple examples of unarmed black men being killed, or the perpetuation of horribly racist behavior on college campuses. You want to talk about the fact that people of color  make up 30% of the US population and 60% of its prison population? Or that the poverty rate for black Americans is almost triple that of white ones? And if Madonna wants to talk about how, for women, it's "You must fit into this box: You must behave this way, dress this way," gosh, imagine what that must be like to be a person of color who doesn't conform to white standards of beauty.

Madonna, who twenty years after the fact is now trying to amp her street by revealing that she not only dated Tupac Shakur in the mid nineties but that "he got me all riled up on life in general" so she was "feeling very gangsta," clearly believes she knows precisely who's the current leader for "Most Oppressed Group in America" title. (Shakur, by the way, was in the midst of the sexual assault case that would send him to prison in 1995 at the time.) But dating Tupac -- and Basquiat -- doesn't make you an authority on the black experience, and being interviewed in Out doesn't make you intimate with the gay one.

And as Alex Berg aptly points out in HuffPo, people don't fall into tidy or singular categories, either. "Gay people are women, too," Berg writes. "We often call ourselves 'lesbians' or 'bisexuals' or just 'LGBTQ.' Women are also people of color. Sometimes referred to as WOC for short. Now, let me really blow your mind: There are LGBTQ WOC." And while you can spend your career exploring racism and homophobia, believe it, my fellow white, straight person, you do not experience it.