McDonald's self-hating complex: Why its overseas P.R. campaign is the worst of all time

The fast food chain has had a bad run lately. This new discovery will only make things worse 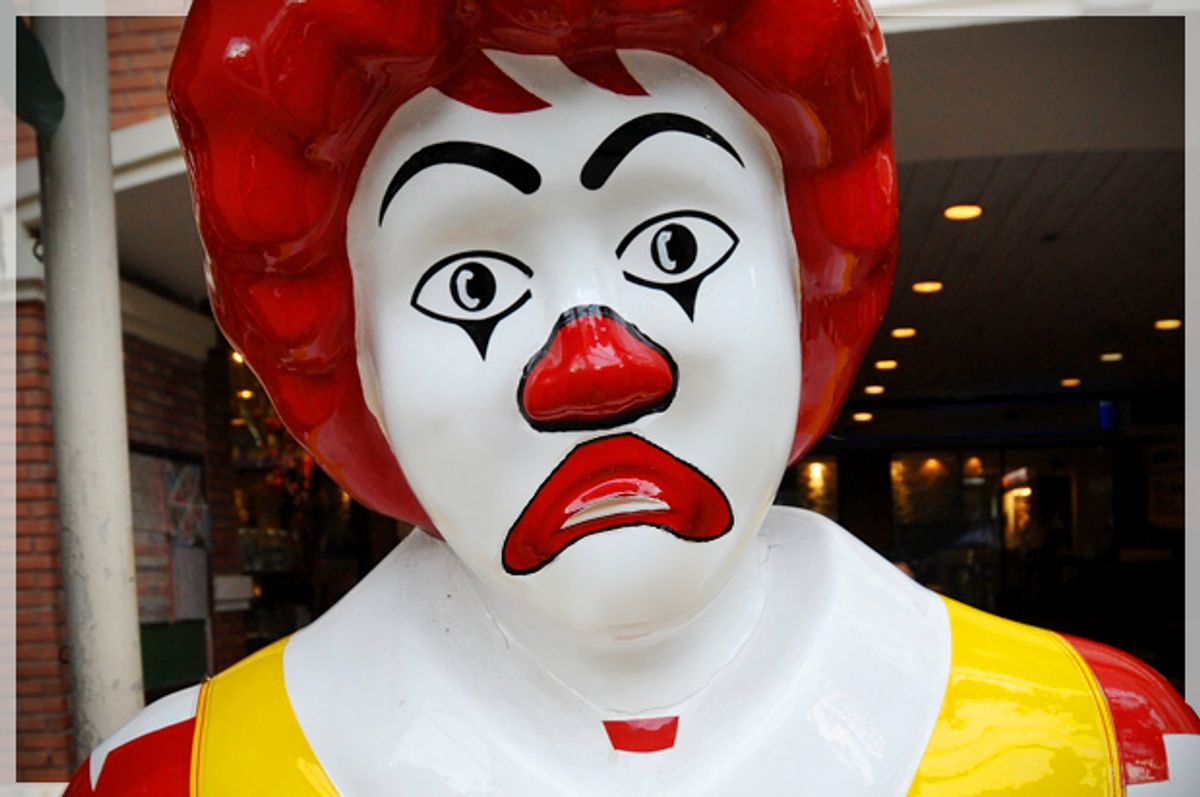 Add this odd bit to the long list of negative news at McDonald’s: The Chinese-language slogan that McDonald’s is using in China (supposedly a translation of “I’m lovin’ it”) insults the restaurant chain’s own food.

McDonald’s slogan in Chinese is 我就喜欢  (wo jiu xihuan).  The second word in this sentence is used to emphatically contradict what someone else has said.  The natural implication is that the speaker is responding to someone who has just insulted McDonald’s food.  While there is no perfect English translation for the phrase, it has the same essential spirit as “I like it no matter what you say!”

The phrase works as a response to someone saying, “Why do you eat that garbage?” or a variety of other insults.  But it is hard to imagine how or why a person would ever say this phrase in a conversation except when responding to insults against McDonald’s food.

For confirmation, I reached out to Columbia University Professor Lening Liu, who directs the university’s Chinese Language Program and is an expert on Chinese discourse.  “That is true!” he wrote.   Professor Liu agreed that the McDonald’s Chinese slogan was something someone would say in response to criticism of McDonald’s food.

As Professor Liu explained it, the problematic word 就 (jiu) has the linguistic role of “subjectivity to express someone’s attitude.”  It is used when expressing a viewpoint strongly in disagreement with what others said.  Professor Liu added that McDonald’s could have easily translated “I’m lovin’ it” into a purely positive-sounding phrase by simply not putting this word in the slogan.  As a “positive alternative,” he suggested rendering “I’m lovin’ it” as “我很喜欢” (wo hen xihuan) or “我好喜欢” (wo hao xihuan), both of which mean “I really like it.”  Neither implies that someone is insulting McDonald’s food.

But do Chinese people actually recognize the implicit insult in McDonald’s slogan?  Professor Liu felt so.  “I think they notice,” he wrote, adding that he thought most people viewed the slogan as tongue-in-cheek and amusing.  A journalist from northern China told me the slogan was “weird” and sounded defensive.

McDonald’s trumpeted “I’m lovin’ it” as a global slogan, but slogans do not always translate easily.  Anyone who has lived in Asia has seen this in reverse, such as the sports drink given the English name “Pocari Sweat” or “BM coffee” or the Japanese boy’s band “KinKi Kids.”  But while these names sound ridiculous in English, none of them were actually aimed at native English speakers, and none were created by a 93 billion dollar global behemoth.

Nobody I spoke with in China denied that McDonald’s slogan sounds like a response to someone insulting McDonald’s food.  Nevertheless, some argued the slogan could be interpreted more generally as a response to people who prefer other food to McDonald’s.  One individual from central China told me, “I think you could also understand it as: No matter how good other restaurants may be, I just like McDonald’s.”  A woman in Beijing said that she viewed the slogan as essentially saying, “I don’t care what you or anyone else likes, I just like McDonald’s and always will.”  Of course, the common thread is that the slogan sounds like a defensive response to others who see McDonald’s as a lesser choice.

There are some indications that McDonald’s marketers in China have pulled back from the slogan.  McDonald’s Chinese home page places the “I’m lovin’ it” slogan in English in the upper left hand corner, right below the golden arches, but the supposed Chinese translation is nowhere to be found.  Stores and signs in China emphasize the English version of the slogan, and folks in Taiwan have questioned why the English phrase is generally used instead of the Chinese.  A weird Chinese pop song featuring the McDonald’s slogan involves a lengthy spoken introduction that attempts to explain the slogan.  “How do you learn to better like yourself?” the singer Wang Leehom asks before “answering” this question with the McDonald’s slogan, implying that it means something like, “I like (myself) no matter what others think.”  Wang Leehom then continues, “Do you know what I like?  I genuinely, genuinely like McDonald’s the most,” perhaps protesting a bit too much.

It is possible that the slogan’s negative implications were intentional.  Maybe McDonald’s Chinese marketers thought the slogan a clever riposte to criticism of its food.  Last year, Radio Shack’s Super Bowl commercial won plaudits for its self-deprecating humor featuring the tagline “The 80s called – they want their store back.”  The commercial was seen as cleverly recognizing and responding to complaints about dated-looking stores.  (The popular commercial didn’t help; Radio Shack declared bankruptcy the next year.)  But even if McDonald’s marketers in China intended the slogan as a cheeky response to criticism, did they tell McDonald’s executives in the US where they were taking the brand?  No member of the McDonald’s board of directors understands Chinese – did they know McDonald’s China picked a slogan that implied complaints about the food?

Until recently, McDonald’s had a strong run in China.  For most of the past two decades, chains like McDonald’s, KFC, and Pizza Hut had the field to themselves, alone in offering Western food, national advertising, branding, slogans, and stylized interiors.  Recently, however, Chinese domestic fast-food chains have grown increasingly popular, while McDonald’s sales have fallen for years, culminating in a double-digit sales drop in 2014.

Despite its earlier run of success, McDonald’s has never had the same linguistic feel for China as other Western brands.  Coca-Cola and Pizza Hut have been widely praised for picking brilliant Chinese phonetic versions of their names; Coca-Cola’s Chinese name means “Let your mouth rejoice” and Pizza Hut’s name was rendered with the characters “Customers Must Win.”  By contrast, McDonald’s Chinese name was rendered in simple Chinese phonetics with apparently no thought given to their significance. Ironically, McDonald’s Chinese name, if interpreted literally, is “Wheat Transformed Into Labor.”  Sounds like a Maoist slogan denouncing McCapitalism.  Or maybe a slogan for McJobs protesters.

Between its name and its slogan, McDonald’s has made some terrible Chinese language choices.  On the other hand, considering brand names like “BM coffee,” it could always be worse.

Wait a second.  “It could always be worse.”  Maybe that will be McDonald’s next Chinese slogan.

Geoffrey Sant is Special Counsel at a major law firm, an adjunct professor of litigation at Fordham Law School, and a director of the Chinese Business Lawyers Association. He writes on legal and international issues.