GOP's absurd new tax scam: What its "middle-class tax relief" is really about

Marco Rubio and Mike Lee want to eliminate all manner of taxes on the rich, sold as relief for "working families" 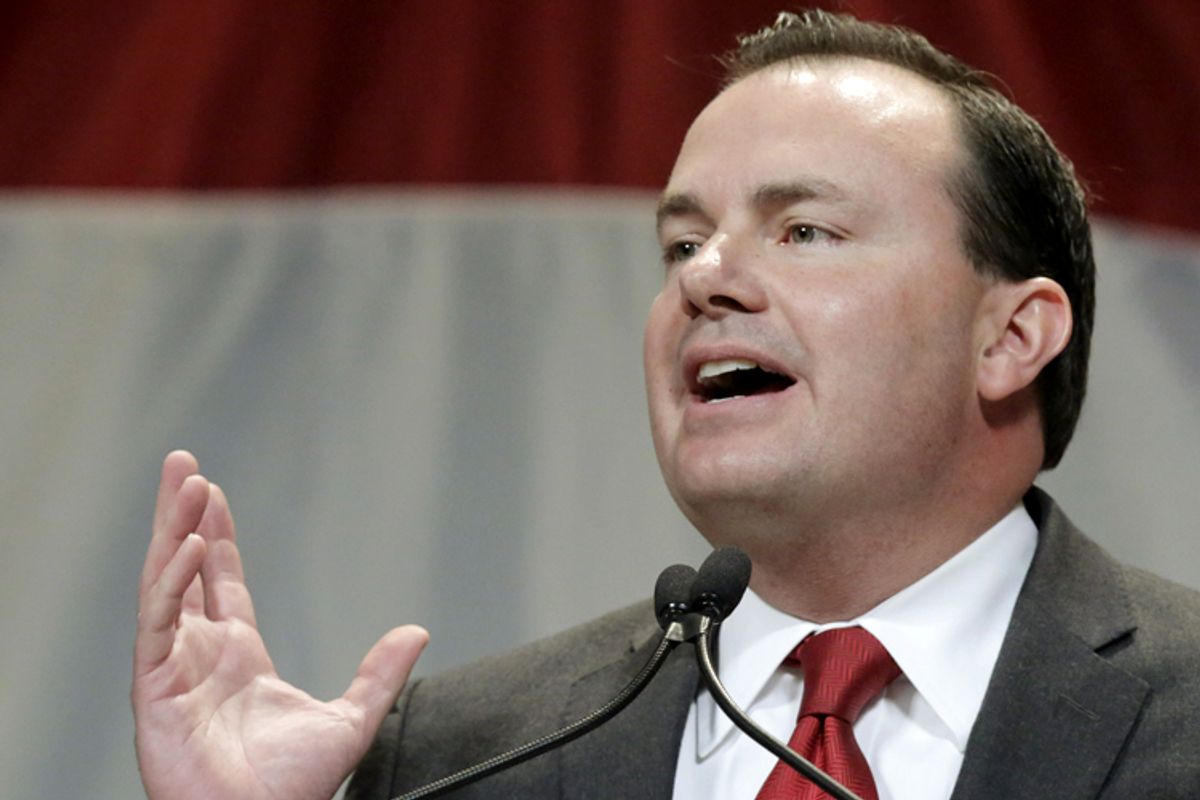 Marco Rubio and Mike Lee have a big idea. The two Republican senators (one of whom is probably running for president) want to transform the GOP’s image from the party of the wealthy to the party of the middle class. It’s a mission born of necessity – the struggles Mitt Romney faced in the 2012 election with connecting to “regular” voters were partly a function of Mitt’s comically stereotypical rich-guy persona, but also stemmed from the fact that the policies Mitt championed served primarily to make the wealthy even wealthier. He tried to hide it by using evasive language and refusing to divulge key details of his policies, but he couldn’t escape the political damage wrought by the idea that rich-guy Romney was mainly interested in cutting taxes for himself and his fellow high earners.

Rubio and Lee are trying to shed their party’s longstanding and well-earned reputation with a new tax reform proposal that they’re pitching as middle-class tax relief. The key element is a big expansion of the Child Tax Credit, which they say “eliminates an unfair distortion in the code and helps level the playing field for working families.” It is, Rubio and Lee argue, a plan for people like you and me, the “working families,” the normals.

But not really. The way the Child Tax Credit expansion is structured makes it difficult for lower-income households to benefit from it. “Most low-income working families will have no net federal income and payroll tax liability and consequently won’t qualify for the new CTC,” the Center on Budget and Policy Priorities notes. “In other words, its design excludes most low-income working families.”

Meanwhile, the remainder of the Rubio-Lee plan is insanely generous towards the wealthy. Taxes on capital gains? Gone. The estate tax? Gone. Corporate taxes? Slashed from 35 percent to 25 percent. “Nobody's run the numbers yet,” writes Matt O’Brien at the Washington Post, “but it's more than safe to say that most of these new tax cuts would go to the top 1 percent.” The plan would also reduce the number of tax brackets to two, and set the top rate at 35 percent, down from where it currently sits at 39.6 percent. Normally, GOP tax plans cut the top rate to somewhere in the mid-20s, so under the Rubio-Lee plan the rich are still making out like bandits, just not quite as much as they theoretically could under normal circumstances. It’s a new era of Republican tax reform!

Obviously liberals and conservatives disagree over this approach to tax reform, but there’s one aspect of the Rubio-Lee plan that most people seem to agree on: it would blow a mammoth hole in the budget. Expanding tax credits costs money, and eliminating all manner of taxes on wealthy people reduces revenue. Implementing both would be so expensive that even conservative proponents of the proposal are unnerved by the price tag. “The plan does have a significant downside,” James Pethokoukis writes. “It would lose something like $4 trillion in federal tax revenue over a decade, maybe half that if you apply ‘dynamic scoring’ that factors in the effects of economic growth. Unless paired with entitlement reform — something Lee and Rubio favor — the tax cuts are too much.”

Rubio and Lee face another problem: the “secret sauce.” That’s the term Paul Ryan, chair of the House Ways & Means committee, uses to describe his own theory for tax reform. Ryan is a trickle-down true believer, and he swatted away an earlier version of the Rubio-Lee plan for its unacceptably high top tax rate. “Growth occurs on the margin,” Ryan told the Weekly Standard last year, “which is a wonky way of saying, if you want faster economic growth, more upward mobility, and faster job creation, lower tax rates across the board is the key—it’s the secret sauce.” This sort of thinking is hard-wired into conservatives and Republicans after decades of chasing growth through lower and lower marginal rates.

Even if they like other aspects of the Rubio-Lee plan, the “high” top rate paired with the expanded credit is going to cause heartburn. The Heritage Foundation’s analysis of the plan was generally favorable, but they were mystified as to why Rubio and Lee would waste money on the Child Tax Credit when they could cut the top rate even more:

The greatly expanded CTC is the centerpiece of the individual side of the plan, but it represents an enormous missed opportunity. The new $2,500 credit would use a substantial amount of revenue that the plan could have otherwise used to lower rates. The top rate, therefore, could have been much lower than 35 percent.

It’s a testament to how single-minded conservatives are when it comes to tax policy that even with a plan like Rubio-Lee – which prescribes wild, fantastical reductions in the tax burden for the wealthy – they’re still complaining that it doesn’t do enough for top earners.

At some point Rubio-Lee will have to reckon with the hardcore trickle-down folks and answer questions about how their plan would affect the deficit (assuming they’re in the mood to pretend to care about deficits). But right now Rubio’s and Lee’s primary concern is getting people talking about how Republicans are all about middle-class tax relief, even as they continue cranking out policies that overwhelmingly benefit the rich.