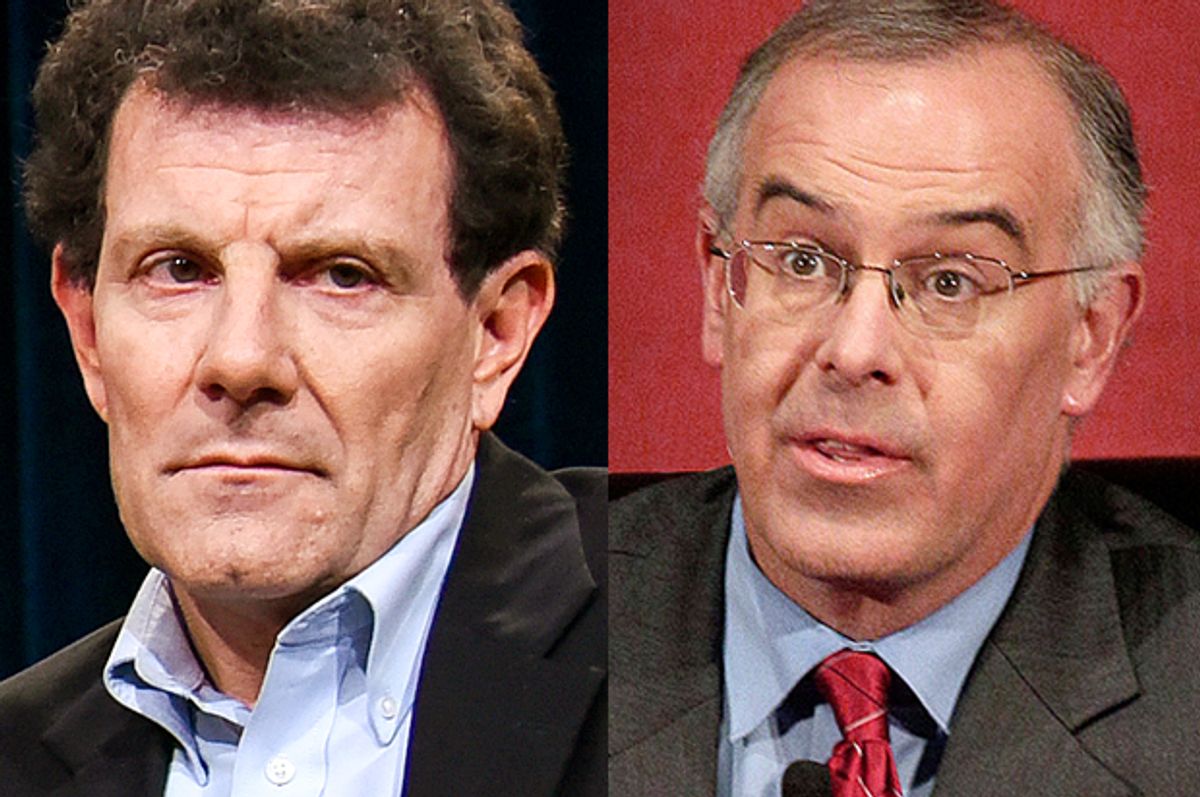 For the better part of the past 10 years, people involved in American politics went in circles debating two questions. The first was whether economic inequality was really as bad as it seemed; the second was whether it was somehow getting worse. But for reasons that remain somewhat unclear — at least to me — that debate is today effectively over. As even Jeb Bush will tell you, the answer to both of those once-polarizing questions is an emphatic yes. (But call it “opportunity,” not “inequality,” please.)

So now that the debate over inequality is settled, it’s time to begin the real work — namely, using public policy to halt and reverse trends that, supposedly, we all see as dangerous and un-American, right? Now that few in the mainstream are willing to say the economic chasm separating the 1 percent from the other 99 is a natural byproduct of a functioning market, American politics can turn instead toward more pressing questions — like how to grow the middle class, right? We are all soldiers in the class war now, right?

No, not really. Because although it may be the case that the reality of inequality is no longer debated, U.S. politics has managed to integrate this new consensus quite easily into the same old framework. In years past, the right — and many centrists — would argue that regulations and redistribution are unnecessary because inequality isn’t really a thing. The left would disagree. Nowadays, the right — and many centrists — argues that regulations and redistribution are unnecessary not because they’re what caused inequality in the first place. Again, the left disagrees. And the talking points, they go ‘round and ‘round…

If you follow the back-and-forth of the “new” debate over fighting inequality, you can see how little is actually different. For example, take David Brooks’ recent column in the New York Times on the “plague of nonjudgmentalism [sic]” that he believes is to blame for inequality, as well as the lower classes’ social dysfunction. Or take the latest missive from his colleague, Nicholas Kristof, on how liberals “blew it” when they lambasted Daniel Patrick Moynihan for his report on what Kristof calls “family breakdown among African-Americans.” Tweak a word here and there, and these centrists — one neoconservative, the other neoliberal — could have written their columns in, say, 2005.

The arguments proffered by each pundit have much in common. But the overriding similarity, and the one that matters most when it comes to politics, is that both believe simple and straightforward economic redistribution is no way to solve the inequality problem. After detailing various “familiar but horrific” stories of working-class and poor Americans whose biographies are fraught with absentee parents, drug abuse and violence, Brooks writes that while we should feel “intense sympathy” for these people, “it’s increasingly clear that sympathy is not enough.” He offers no evidence to support this assertion, but does note that “money and better policy” are not the only things “missing in these circles.” No, Brooks says; “it’s norms.”

Meanwhile, Kristof’s piece, which basically reads like a “+1” to Brooks, echoes the idea that what’s afflicting poor people — especially African-Americans — is not a lack of money but a lack of virtue. The Pulitzer Prize-winner is at pains to note how he doesn’t want “to cast judgment on nontraditional families,” but he nevertheless writes that anyone disinclined to “emphasize the consequences … of changing family structure” on poor kids is making a big mistake. Like Brooks, he pays lip service to redistribution (or, as he prefers to put it, with borderline neoliberal self-parody, “support programs to boost the economic prospects for poorer families”). But his chief interest is establishing that most single-parent families are bad.

As the New Republic’s Elizabeth Stoker Bruenig noted in her response to Brooks, which applies just as easily to Kristof, fighting poverty and inequality by looking at “norms” rather than economics is … odd. Assuming one really does think that poor people are poor at least in part because they lack money, as Brooks and Kristof claim to believe, it’s a curious public policy that focuses on values, which are subjective and intangible, ahead of economics, which are objective and clear. Bruenig points to studies suggesting that Brooks and Kristof have it exactly backward; that people who receive “food stamps” make better nutritional choices than most, and that poor parents who are provided with economic support spend their money on normatively good things — like children’s clothing, toys and books — while spending less on “bad” things like cigarettes and beer.

The most immediate conclusion, of course, is that poor people are not poor because they don’t know how to act right. Rather, they’re poor because they don’t have enough money (a status also known as being poor). Further, logic and research would strongly imply that if the money provided to the poor is not likely to go wasted — and if the government is much better at redistributing money than it is at fixing people’s souls — then it makes more sense for public policy to concern itself with cold, hard cash instead of values and norms. So why do these conclusions remain out of reach for Brooks and Kristof, two educated and intelligent men?

Well, to get a definitive answer, you’d have to ask the men themselves. But absent that, I think the Week’s Jeff Spross has as good an explanation as you’re likely to find. As Spross writes, focusing on norms “requires no economic sacrifice from elites whatsoever,” which is not the case for redistribution. So long as the conversation is about values and morals and personal responsibility, the wealthy need not worry about raising taxes, increasing inflation, strengthening unions or raising the minimum wage. And there’s one other implicit takeaway if you buy Kristof and Brooks’ explanation: If you’re lucky enough not to be poor, it’s not just because you won the lottery when it comes to your parents; it’s because you’re a better person, too.