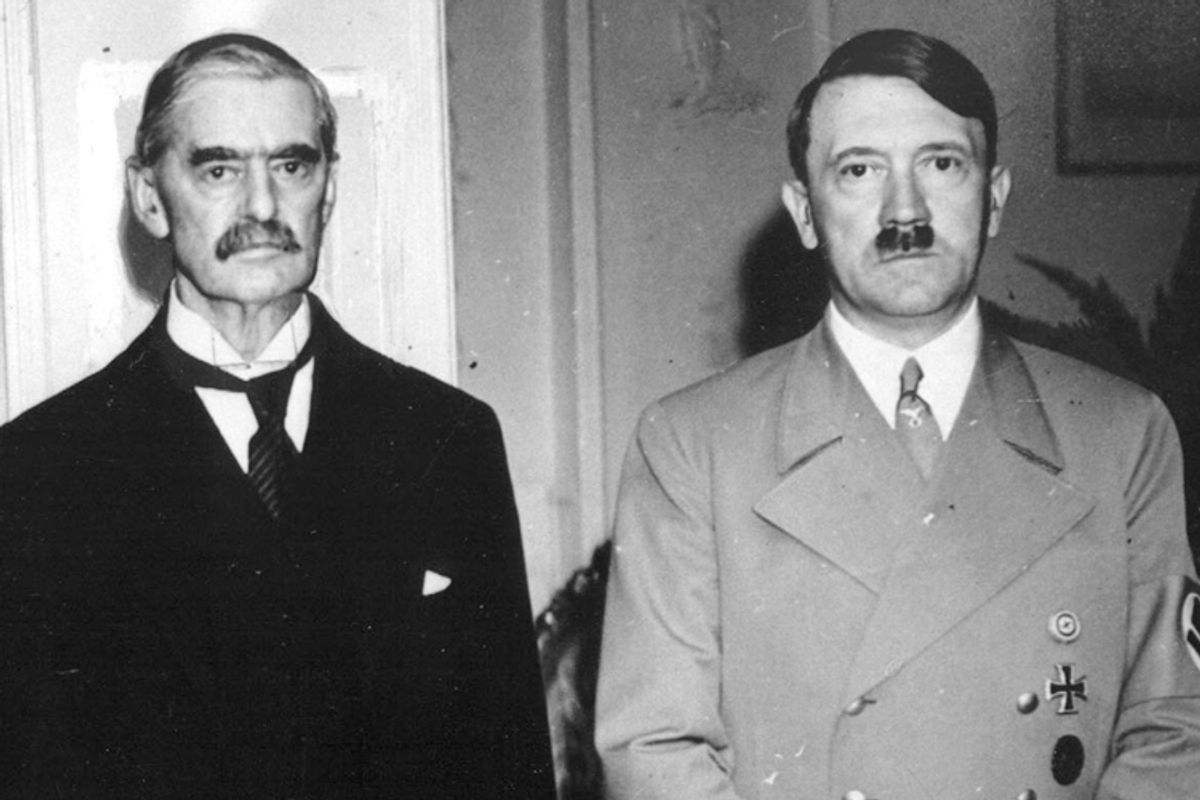 Sen. Ted Cruz dropped by Hugh Hewitt’s radio show Wednesday, and with the Iranian nuclear negotiations dominating headlines, Hewitt had a simple question for the Texas Republican: Does the nuclear deal with Iran make Barack Obama this century’s Neville Chamberlain? Cruz said yes, absolutely, and argued that the Obama’s administration’s dealings with Iran are little different from the much-maligned British prime minister’s 1938 agreement with Adolf Hitler to cede portions of Czechoslovakia to Nazi Germany. “I believe we are hearing echoes of history,” Cruz explained. “I believe we are at a moment like Munich in 1938. And indeed, Prime Minister Netanyahu’s address to Congress last week was Churchillian in its clarity and moral gravity.”

Obama-Chamberlain comparisons are not a new feature of the international negotiations over Iran’s nuclear program. When the framework was first announced in November 2013, conservative commentators were quick to describe it as “worse than Munich.” It’s a silly comparison on several levels: Iran is nowhere close to being the sort of military threat that Nazi Germany was, and the immediate impact of the Munich agreement was to initiate a refugee crisis followed by pogroms and the rounding up of thousands of Czech Jews who were to be shipped off to concentration camps. You’d be hard-pressed to find any sort of parallel in the six-party talks with Iran.

But “Obama is an appeaser like Chamberlain” makes for a great talking point, and it gives the impression that you’re approaching foreign policy issues with grave seriousness – would you want to be responsible for THE NEXT HITLER??? – when you’re actually just being a sky-is-falling hyperbolic warmonger. It’s actually become the go-to argument for conservatives looking to get a quick dig in at Obama’s foreign policy. If you look back over the years, the historical record is littered with instances of conservatives claiming that Barack Obama just ceded the Sudetenland to Hitler.

The “Obama is an appeaser” phenomenon actually predates Obama’s presidency. In May 2008, George W. Bush traveled to Israel and delivered a speech before the Knesset in which he took a barely veiled swipe at then-presidential candidate Obama’s stated intention to enter into negotiations with American adversaries like Iran. “Some seem to believe we should negotiate with terrorists and radicals, as if some ingenious argument will persuade them they have been wrong all along,” Bush said. “We have heard this foolish delusion before. As Nazi tanks crossed into Poland in 1939, an American senator declared: ‘Lord, if only I could have talked to Hitler, all of this might have been avoided.’ We have an obligation to call this what it is – the false comfort of appeasement, which has been repeatedly discredited by history.”

Conservatives went wild over the comparison and heartily endorsed it, even if they weren’t entirely sure what “appeasement” meant.

From there it became fashionable to describe every single foreign policy position of Obama’s a Chamberlain-esque appeasement, regardless of the context. On Fox News in July 2009, no less a serious conservative than Charles Krauthammer said: “Obama speaking in Moscow referred to our reaction and opposition to the Russian rape of Georgia as ‘our disagreements on Georgia's borders.’ Well, Chamberlain and Hitler had a disagreement about Poland's in September of 1939.” (Fun fact: The Russian conflict with Georgia began under George W. Bush, who clearly lacked the Churchillian resolve to stay Russia’s Nazi-like war machine.)

In December 2010, the new nuclear disarmament treaty Obama negotiated with Russia was ratified by the Senate, and it also became another “Neville Chamberlain moment” for Obama, in the words of Heritage Foundation resident British person Nile Gardiner.

A few months later, as the government of Egyptian president Hosni Mubarak teetered on the brink of collapse, the Washington Post reported that the U.S. was “rapidly reassessing its tenuous relationship with the Muslim Brotherhood,” given that the group was “poised to assume at least a share of power should Egypt hold free and fair elections in the coming months.” Fox News’ Sean Hannity, upon hearing the news, opined: “We can't be that naive. If their goal is Sharia, if they support Jihad, if they're going embolden terrorists and enable them, then they are our enemies. At that point, re-examining a relationship with terrorists is, it sounds like Neville Chamberlain believing that he could have peace in this time back in World War II.” (Hannity asks whether Obama is the new Chamberlain roughly once every 10-12 seconds.)

In December 2013, President Obama traveled to South Africa to attend the memorial service for Nelson Mandela. While there, he bumped into Cuban leader Raul Castro and the two men shook hands. This was an outrageous development in the eyes of John McCain, America’s angriest senator/human. “Why should you shake hands with somebody who's keeping Americans in prison? I mean, what's the point?” McCain asked. “Neville Chamberlain shook hands with Hitler.” A few days later on one of his trademark Sunday show appearances, McCain allowed that maybe he’d gone a little too far: “I think it was gross exaggeration.”

But, as we all know, temperance isn’t one of McCain’s strongest suits, and when he stopped by "The O’Reilly Factor" on Feb. 2, McCain heartily agreed with Bill O’Reilly that there is zero difference between the Islamic State and Nazi Germany, and argued that when it comes to ISIS, “President Obama is operating in the finest traditions of Neville Chamberlain who once said we're not going to send our young men to a country that we have not been to and speak a language we do not know.”

Earlier that same day, the Defense Department announced that the U.S. and coalition forces had conducted 27 airstrikes on Islamic State targets in Syria and Iraq. Just like that appeasing squish Neville Chamberlain would have done.

The takeaway from all this is that conservatives see a world that is just jammed full of Hitlers. Cuba, the Islamic State, the Muslim Brotherhood, Russia, Iran – Hitlers all. And once you've reduced every single international conflict into "us versus Hitler," well, anything less than full-on, guns-blazing, hard-line, World War II-type swagger starts to sound weak and unreasonable. If only Obama would get serious and realize that literally everyone is Hitler, he wouldn't be such a Chamberlain.