Rand Paul's pointless and looming campaign: How is this still a thing?

His candidacy has no purpose, but he gets points for being "interesting." Here's why his campaign is one big fraud 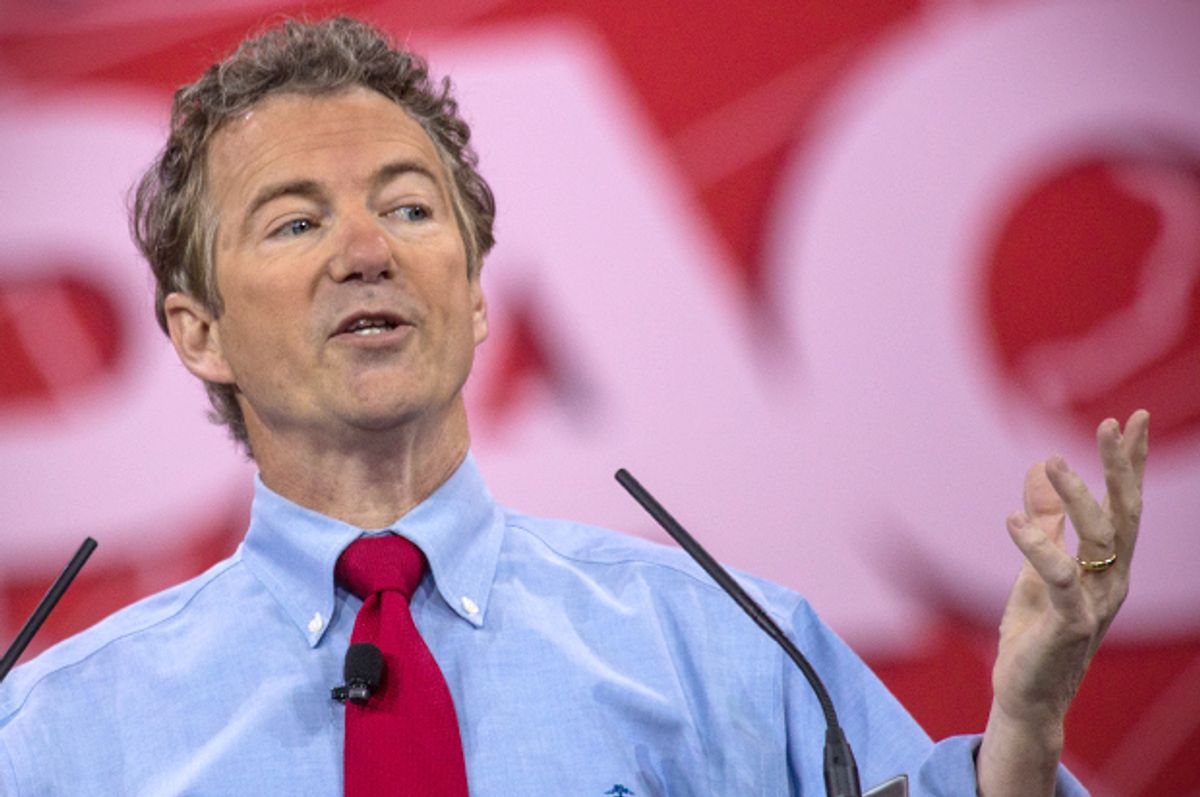 One thing they don’t teach you in Political Pundit School (which, thankfully, does not actually exist) is that repetition is key to success. To be sure, that’s not to say that the kind of self-plagiarism Thomas Friedman has parlayed into an obscene amount of influence and wealth should be encouraged. It is to say, though, that part of getting people to listen to your opinion is finding ways to say it over and over again. And as Paul Krugman found out while spending most of 2009-2013 urging more fiscal stimulus, if your opinions run contrary to those of the wealthy, sounding like a broken record is still no guarantee.

With that lesson firmly in mind, then, I’m going to make an argument I’ve made a few times before — despite the fact that it’s in conflict with people whose pocket change probably exceeds my own net worth. And that argument is as follows: Kentucky Republican Senator Rand Paul is not only an unserious person who will never be president; he is also an unserious person who will never be president who’s spent most of his time in office jettisoning the few policy stances that made him an “interesting” prospect to begin with. Beyond his own personal ambition, his soon-to-be-official candidacy has no point.

Obviously, I don’t consider this to be a particularly new development. But some of the senator’s most recent actions make the disconnect between the idea of Rand Paul for President and the reality of Rand Paul for President especially glaring. Take his decision to endorse the substantively embarrassing and politically disastrous open letter that the vast majority of Republicans in the Senate recently sent to the leaders of Iran. Despite insincere claims to the contrary from the likes of Israel Prime Minister Benjamin Netanyahu and his proxies in the GOP, if negotiations between the P5+1 and Iran over its nuclear program falter, the most likely eventual outcome will be war. Maybe between Iran and Israel; more likely, between Iran and the U.S.

Paul, who is supposedly the standard-bearer for the GOP’s dovish wing, knows this. But because seeing the Islamic Republic as the source of all evil in the world has become part of Republican Party doctrine — and because Paul is desperate to be that party’s next presidential nominee — the devoted non-interventionist and believer in the Constitution gave this attempt to pave the way for war and undermine the separation of powers his John Hancock. Since the move was utterly incompatible with who Rand Paul is supposed to be, the senator now says that he only did it so as to “strengthen” President Obama’s hand. The evident difficulty with which Paul’s devotees at the libertarian magazine Reason swallowed this nonsense testifies to its fundamental absurdity.

Ugly as that may have been, though, it wasn’t even the most serious self-inflicted wound to Paul’s “brand” of the week. Because while you can make excuses of political expediency for his stance on Iran, there’s no way to understand how this believer in a hands-off foreign policy could promote nation-building. Yet when it comes to the creation of a hypothetical Kurdish state in the Middle East, that’s exactly what Paul recently did! “I would draw new lines for Kurdistan and I would promise them a country,” Paul told the cosmopolitan wonks of Breitbart News on Wednesday. The promise, he said, would make the Kurds “fight like hell” against ISIS. One imagines it’d make the leaders of Turkey, a vital U.S. partner, do some fighting, too.

So, if you’ll indulge me for a minute, I’d like to take a bird’s-eye view of the “interesting” proposal of a Rand Paul presidential run. Initially, the argument for his campaign went more or less like this: Paul’s libertarianism is in line with the new, Tea Party-era conservative mindset. His opposition to the war on drugs and mass incarceration would allow him to appeal to non-white voters like no other national Republican. His distaste for military intervention would be to the liking of a war-weary nation. And his opposition to the NSA and bulk surveillance would tempt left-leaning millennials to give the GOP a closer look. (Plus, his staff knows how to use social media — and they’re hip to all the latest memes!)

Now, here’s how that case is looking today: The new hotness when it comes to fiscal policy in the GOP is to cut taxes and hike defense spending while yelling “look out behind you!” whenever anyone notes that this would explode the deficit. Concerning Paul’s appeal to minorities, he’s still strong on reining in the drug war and reducing mass incarceration, but he’s also got that opposing-the-Civil-Rights-Act albatross hanging around his neck. He’s no longer much of an opponent of warmaking in the Middle East (which, in fairness, aligns him with an increasing number of Americans). He’s cool now with nation-building. And one of his more significant acts in Congress last year was to help kill a bill intended to constrain the NSA.

Granted, Paul is still ahead of the curve when it comes to social media; he’s “getting on Snapchat,” in fact! But with that thin reed left to support an entire presidential campaign, forgive me if I quote a running segment on John Oliver’s HBO show and ask one question about Rand Paul 2016: How is this still a thing?