"America's Third World": The marchers have gone, but Selma is still mired in poverty

I crossed the sacred ground of the Edmund Pettus Bridge, only to find the decaying memorial--much like Selma itself 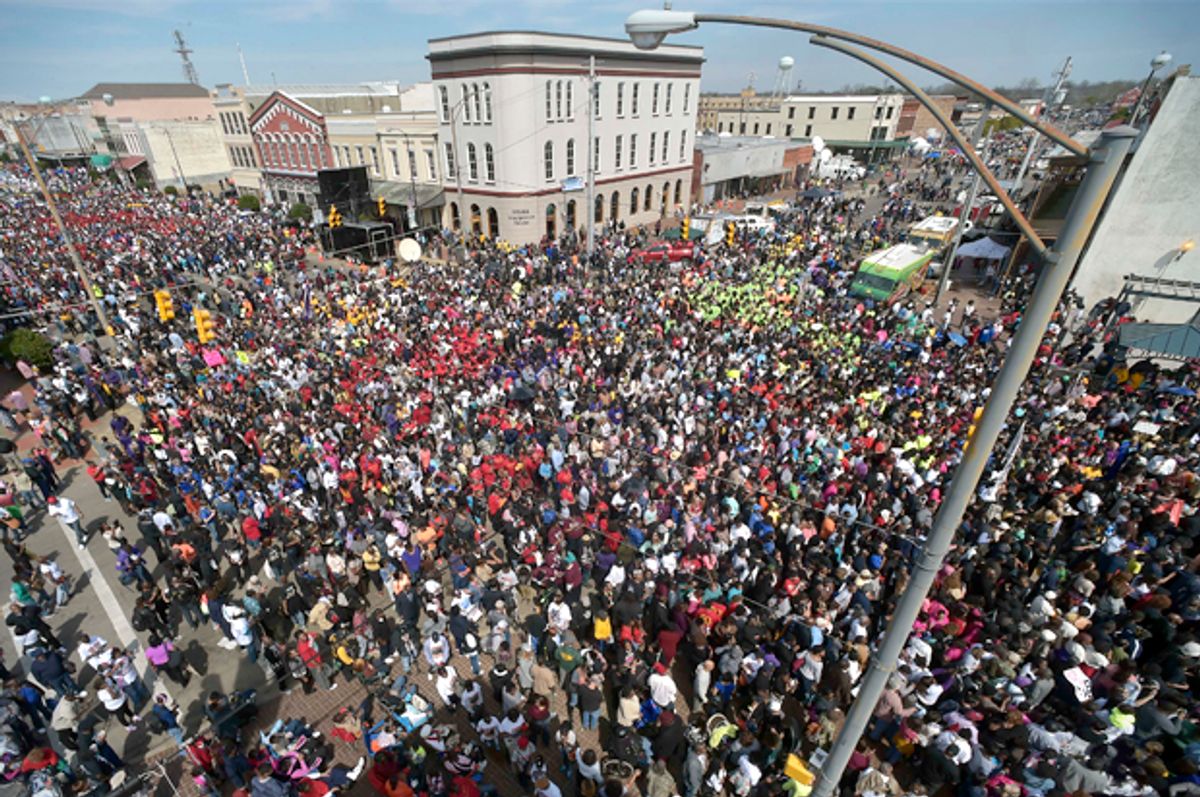 Crowds gather before a symbolic walk across the Edmund Pettus Bridge, Sunday, March 8, 2015, in Selma, Ala. (AP/Mike Stewart)
--

For its historical value and moral power, every American citizen should make a pilgrimage to Selma in an attempt to gain access to its inspiration and the courage of its martyrs and heroes. Such a trip would force Americans to confront the devastating disparity between Selma’s importance and its infrastructure. The disparity comes to represent the consistent American violation of its history, the betrayal of its people, and the inequality that undermines the victories of Bloody Sunday, and threatens to poison its future.

When I crossed the Edmund Pettus Bridge, and felt my feet against its sacred ground during the 50th anniversary commemoration, I was moved by my surroundings – people of various ages and races united in tribute to those whose faith and strength injected life into America’s claim of egalitarian representation and governance. I was stirred by the immediacy of history, imagining both the beauty and brutality of what transpired on that same slab of concrete. I was also shocked and saddened by the hideous neglect of Selma’s lone attempt to honor its spirit and significance.

I traveled to Selma on a bus with staff and members of the Rainbow/PUSH Coalition, Jesse Jackson’s civil rights organization in Chicago. One member tried to prepare me for what I would see immediately after crossing the bridge, saying, “The first time I came here and saw the memorial, I was so hurt that I had tears in my eyes.”

At the foot of the bridge, and next to a sign welcoming visitors to Selma, sits a small park of dirt and gravel. Empty soda bottles and fast food wrappers litter the ground where plaques paying tribute to John Lewis and Hosea Williams stand, showing visible decay. It is the size of a children’s playground in a tiny village of the Midwest, and there is hardly anything there to indicate its meaning in American and world history. The edge of the park connects with a vacant strip mall, giving visitors a connection between the disgusting state of the park and the disrepair of the American economy. Across the street is an abandoned used car lot. With its broken surroundings, its dirty trappings, and its placement among the wreckage of bankruptcy, it is ugly; there is no other word for it. But far exceeding the aesthetic wound of the memorial is the grotesquery of the betrayal it represents. If America cannot pay proper respect to its bravest citizens, the citizens who cried and bled to give their country credibility, it belongs on a map far outside the moral universe.

The memorial park resembles a war zone. It is a casualty of the spiritual violence America wages against its own memory and humanity. The violence goes beyond an assault on the spirit, and into the realm of physical reality, in the Selma that exists before the bridge, and the desolate rural outposts of obliteration that neighbor it.

On the bus ride into Selma, I looked out the window and thought about the words to Lynyrd Skynyrd’s rock ‘n’ roll classic: “Sweet home Alabama / Where the skies are so blue.” Much of the state is so undeveloped, and so naturally beautiful, that the sight of the sky, which seems to stretch into space, stole the breath out of my lungs. Down below the beauty, however, is the monstrosity of modern poverty, hardly different from that of the Great Depression.

Ramshackle trailers, barely able to stand, with holes and tears in the structure, almost crumble into barren fields of dirt and burnt grass. Many people subsist on the crumbs and garbage of the world’s wealthiest nation. With no running water, no indoor plumbing, no central heating or air, they struggle to survive in a cesspool of squalor.

Walking through downtown Selma is like crossing the threshold of a time warp. It is not only a ghost town, but a ghost town of 1960s America. There is no real commerce, and from what I could tell, no hope for employment or opportunity for its residents. Hundreds of thousands of people had descended upon the tiny town for the 50th anniversary proceedings, but food was available only through street vendors, the majority from cities like Atlanta, Birmingham and New Orleans. Selma had no restaurants or diners of its own to serve its tourists.

Selma is situated in the center of Dallas County – the poorest in Alabama, and one of the poorest in America. More than 40 percent of Dallas County families and 67 percent of children live below the poverty line. Its violent crime rate is five times the state average. “America’s Third World” is how the Birmingham News recently and rightly labeled it.

If America has an addiction, it is to its own onanistic self-glorification. It’s little surprise, then, that throughout the 50th anniversary commemoration, there was hardly a mention of the current state of Selma. Rather, the occasion was used, often exploited and manipulated, to present American exceptionalism with a human face. Officially, in President Obama’s remarks and media commentary, it was yet another opportunity to celebrate the greatness of America under the guise of recognizing real progress and actual patriotism.

During a Saturday afternoon event billed as “Living Legends” in the Selma Convention Center – a small building with bathrooms without toilet paper and faucets that released water like kinked hoses – Jesse Jackson put down the hammer on the houses of delusion that decorate the American landscape.

“Selma is a rearview mirror. It takes no courage to walk through a rearview mirror in one’s imagination,” he said. He explained that President Obama should have announced, during his speech, a federal effort to nationalize Selma’s bridge and memorial, clean the area around it, and build a monument on par with Gettysburg, Mount Rushmore and other historical sites. Jackson, alone among the speakers in the center and the commentators on television, called for the federal government to save the former home of Amelia Boynton Robinson. Robinson played a crucial role in the civil rights movement, allowing Dr. King and other civil rights leaders to stay in her home in Selma, where they rested in preparation for the march, but also drafted the first copy of the Voting Rights Act. Her home now has boarded windows, and sinks into the soil – indistinguishable from the blown-out buildings on the same block.

Beyond indifference and lack of care, it is hard to understand why President Obama would not take steps to improve the memorial and protect the home of Amelia Boynton Robinson. It seems that even the weird and reckless Republicans of Congress, who could not lower themselves to even show up to the commemoration, would not obstruct the effort.

Jackson’s other proposal, although morally and politically necessary, seems harder to implement. “We must end the war on the poor, and restore the war on poverty,” he said.

Current political movements are in the opposite direction. Robert Bentley, the governor of Alabama, rejected the money for Medicaid’s expansion, while 1 million Alabamans have no health insurance. On the national level, the Democrats, with few exceptions, are increasingly meek in their resistance to Republican-led advocacy of austerity. Such policies will not alleviate, but will enhance, the pain, suffering and misery of the poor, sick and disabled.

The next morning, hundreds of activists and ordinary people, some of whom participated in the original march on Selma, huddled in the cold outside the doors of the Brown AME Chapel. They were hoping to have one of the few open seats for the service celebrating the marchers 50 years after their sacrifice, and to hear the speeches of genuine civil rights leaders like Jackson and William Barber. The arrival of government vehicles quickly destroyed their hopes, as Alabama State Police instructed the crowd to disperse and stand across the street. Secretary of Homeland Security Jeh Johnson, Attorney General Eric Holder and other dignitaries and elected officials had decided to attend and speak. They all had entourages and security detail. While they talked about freedom, justice and equality, the people shivered outside their door.

David Masciotra is the author of "Mellencamp: American Troubadour" (University Press of Kentucky). He has also written for the Atlantic, Washington Post, and Los Angeles Review of Books.