After "Mad Men," what's next for Jon Hamm?

From the nightly news to the Coen brothers, the versatile star has more options than most 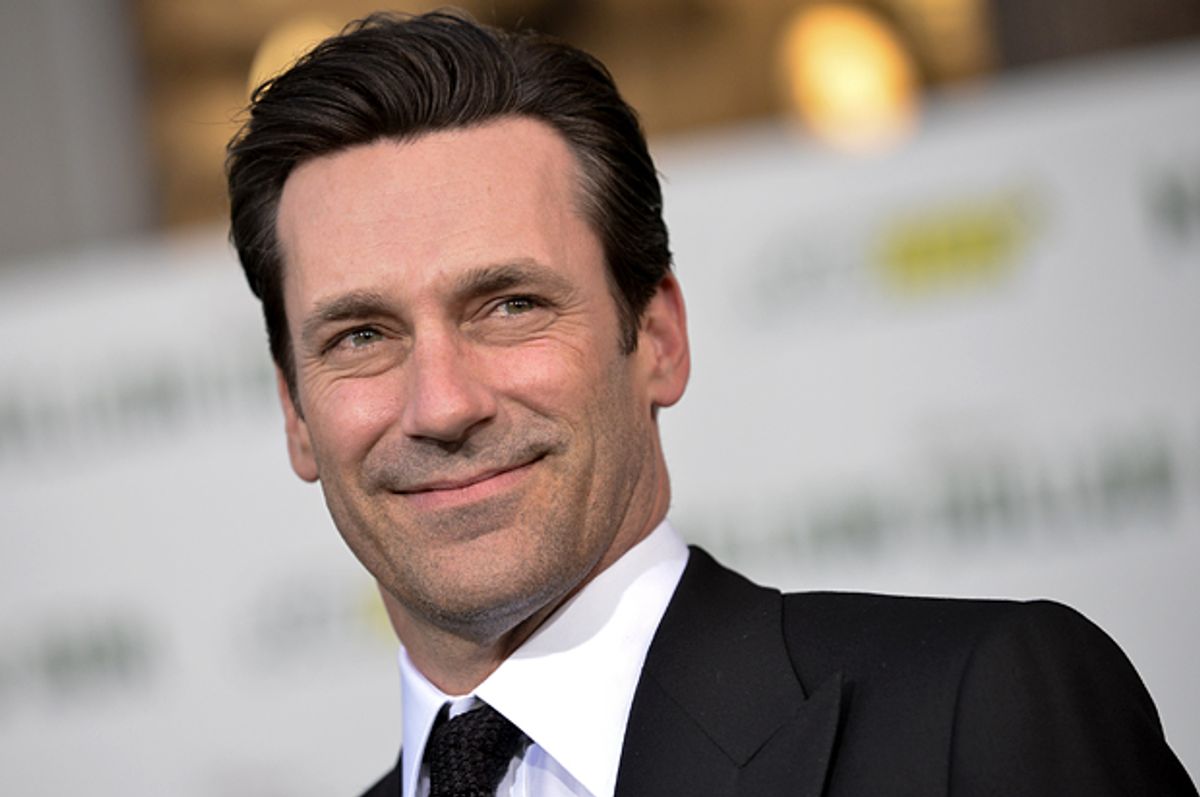 Jon Hamm's seven-and-a-half years as the dashing, damaged ad executive Don Draper on “Mad Men” have skyrocketed him from an unknown actor to one of the acting world’s hottest commodities. Now, with the show wrapping up this summer, Hamm's schedule is wide open. What should he do next? We have some ideas in mind.

More comedy:
Throughout his "Mad Men" tenure, Hamm has consistently burnished his comedy credentials on the side. Next up, he’ll be appearing in Netflix’s new “Wet Hot American Summer: First Day at Camp," and has made memorable cameos on sitcoms like “Archer,” “Parks and Recreation,” “30 Rock” (and most recently, in a delightfully surprising appearance in Tina Fey’s new show “The Unbreakable Kimmy Schmidt”) as well as in films like “Bridesmaids” and “Friends With Kids." He's also a known comedy buff with a ton of friends in the biz -- as John Slattery once put it, "Inside the face of a matinee idol lurks a full-on comedy nerd."

Yet due to “Mad Men” commitments, these have always been smaller roles, ones that often played on the easy joke on his good looks, and there’s certainly comic depths that we're confident have yet to be plumbed here. Now that he’ll have more time to play with, we'd love to see him collaborate more extensively with the likes of Tina, Amy and Kristen -- perhaps as a sitcom regular (a Jack Donaghy-type mentor figure?) or even as a comedic lead in a feature film (a possible silver lining to that "Male Ghostbusters" news, perhaps?)

Another period drama — from a different period:
Not to typecast the man, but there’s something about Hamm’s looks — that square-jawed handsomeness and the combination of elegance and masculinity — that seems to have been plucked from another era. And as we saw in "A Young Doctor’s Notebook," a WWI-set drama he starred in alongside Daniel Radcliffe, it's not just the mid-20th century where he looks right at home.  For his next project, he could take things even further into the past. A Civil War general? An Elizabethan poet? Name it, he could play it. Or hey, how about a biopic? He'd make one hell of a Cary Grant (that idea's free, studio execs).

Voice acting:
Then again, shooting "Mad Men" was a lot of work, and Hamm must be tired. Since we already know he can sell pretty much anything, why not spend the next little while chilling in a studio and using that silky baritone making some easy money narrating car ads? We already know we would buy a Chevy from this man, and he's already done American Airlines and Mercedes Benz, after all, so this seems like an obvious move.

Dark, character-driven film dramas:
As he proved in his guest spot on Charlie Brooker's dystopian anthology series “Black Mirror” — and many times throughout "Mad Men" — Hamm can handle darker and more unconventional material, and he’s great as the charismatic leading man with something twisted brewing beneath the surface. We’d love to see him with a director who shines at these sort of grittier, more character-driven dramas — like the Coen brothers, Paul Thomas Anderson or even David O. Russell — who can make use of his full range of dramatic skills.

In some ways, we could see him having a career that looks something like Bradley Cooper's, another actor who boasts a similar combination of classic good looks, goofball comedic chops and dramatic depth, and who excels in nuanced roles that walk a fine line between dark comedy and tragedy.

A major action franchise:
It’s no secret that Jon Hamm has been approached for a bunch of superhero roles, which he has repeatedly turned down; as he told Radio Times about his irrelevance to the younger generation, "It doesn't compute to the generation that most of Hollywood cares about if your last name's not Hemsworth or you are not in One Direction or you don't wear a cape and tights for a living, you literally have a hard time making an impression."

OK, Jon Hamm’s feelings — namely, the feeling that he doesn’t want to be a superhero — should probably be taken into account here. But since this is our thought experiment and not his .... When will Jon Hamm just accept the fact that he basically is the real-life Superman (or Batman on a broody day) and resign himself to his ridiculously handsome and bankable fate? We know the world would greatly enjoy seeing him battle villains in a skin-tight leotard, even though is name isn't Jon Hemsworth. (Or he could just Liam Neeson himself? Always a good option.)

Replace Brian Williams:
He looks and sounds the part, has a built in fan-base, oodles of gravitas and, as we saw with Draper, he’s great at making a half-truth sound like a full-truth. Let’s do this!