Dolce and Gabbana dig in deeper over "children of chemistry"

The Italian designers set off a boycott led by Elton John 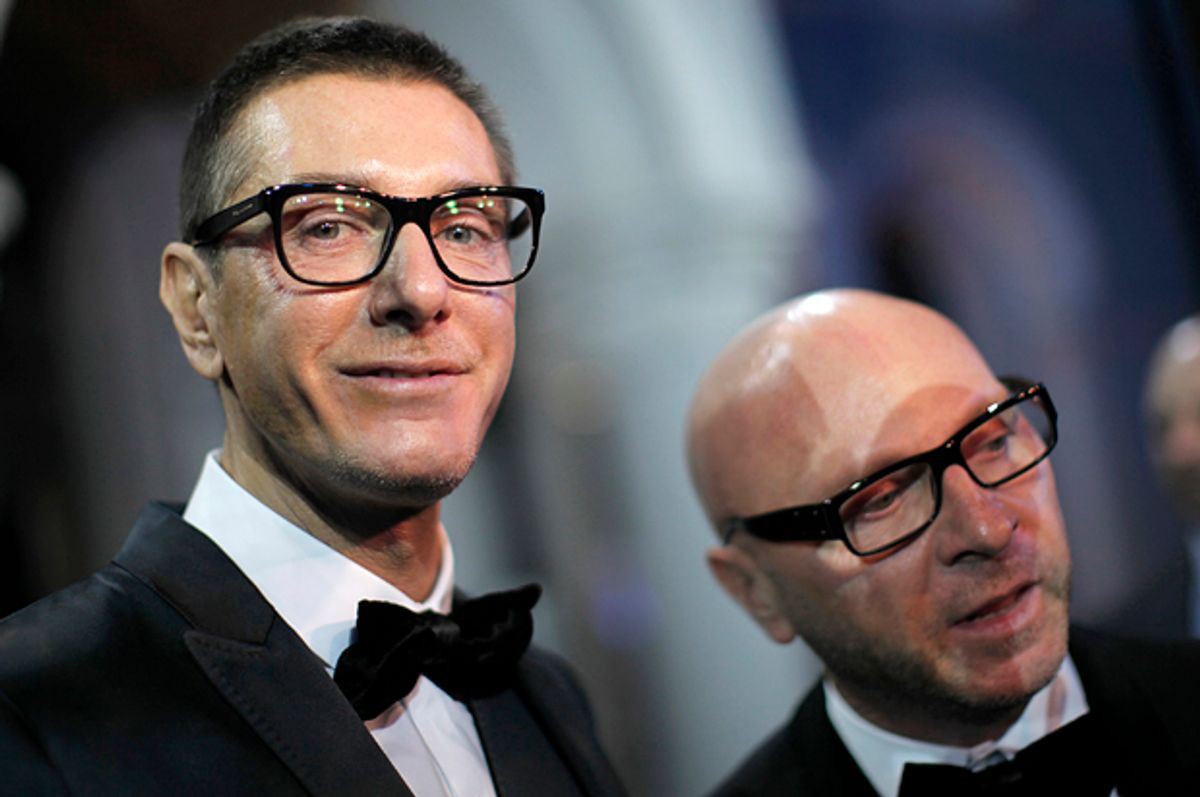 Here's something you don't see every day: a war of words about parenting involving a bunch of men.

Just earlier this year, Italian designers Domenico Dolce and Stefano Gabbana unveiled their fall and winter collection under the theme "Viva la mamma" – a celebration that included pregnant and baby carrying models strutting their catwalk. But then, over the weekend, their seemingly family-friendly message took a turn. Speaking with Italy’s Panorama magazine, the pair said, in a phrase translated by the Telegraph, "We oppose gay adoptions. The only family is the traditional one. No chemical offsprings and rented uterus: life has a natural flow, there are things that should not be changed." (The two were a couple for several years, but broke up in 2005 and have continued to run their business together.)

In the interview, Dolce is quoted as saying that making babies "must be an act of love… You are born to a mother and a father – or at least that’s how it should be. I call children of chemistry, synthetic children. Rented uterus, semen chosen from a catalog." And Gabbana chimed in, "The family is not a fad. In it there is a supernatural sense of belonging."

The statements quickly roused considerable ire, most notably from Elton John, who retorted on Instagram, "How dare you refer to my beautiful children as 'synthetic'. And shame on you for wagging your judgmental little fingers at IVF - a miracle that has allowed legions of loving people, both straight and gay, to fulfill their dream of having children. Your archaic thinking is out of step with the times, just like your fashions. I shall never wear Dolce and Gabbana ever again. #BoycottDolceGabbana." The meme quickly spread, with "Glee" and "American Horror Story" creator Ryan Murphy tweeting, "These designers horrifying views are never in fashion. Their clothes are as ugly as their hate." Ricky Martin, who has two children via an IVF surrogate, also lent his support to the boycott, as did Al Roker, who said, "In spite of what @dolcegabbana think, my beautiful IVF children are not 'synthetic children'. I agree with @eltonjohndotcom." Other supporters included Courtney Love and Martina Navratilova. Most dammingly of all, Posh herself, Victoria Beckham, jumped into the fray, expressing her support and "Sending love to Elton David Zachary Elijah & all the beautiful IVF babies."

The recent dustup is the latest in the duo's sometimes not so gay-friendly history. Back in 2009, Ad Age noted that the brand seemed to be giving up its homoerotic image observing, "the odd case of Dolce & Gabbana, a brand that has a big gay fan base but no longer reciprocates by advertising in gay media." And interestingly enough, in 2006, Gabbana reportedly told an Italian newspaper that he'd approached a female friend about helping him start a family, saying, "My dream is to have a baby, not to adopt one because I am not up to it and I don't feel strong enough. I want my own child, a biological child, the fruit of my sperm, conceived through artificial insemination because it wouldn't make sense for me to make love to a woman I don't love." But he added firmly, "I am opposed to the idea of a child growing up with two gay parents. A child needs a mother and a father. I could not imagine my childhood without my mother. I also believe that it is cruel to take a baby away from its mother."

This week, the two have come back with replies of their own to the latest kerfuffle, with Gabbana posting several messages on his Instagram -- none of which will likely do much to quell the controversy. In what one hopes can be attributed to simply shaky English, he writes, "#boycottdolceandgabbana because is different! And you hate the different opinion! Racist dictators [love] freedom to speak." A Monday post asserts, "We firmly believe in democracy and the fundamental principle of freedom of expression that upholds it. We talked about our way of seeing reality, but it was never our intention to judge other people's choices. We do believe in freedom and love." And he adds a quote from Dolce, "I grew up in a traditional family, made up of a mother, a father, and children. I am very well aware of the fact that there are other types of families and they are as legitimate as the one I've known. But in my personal experience, family had a different configuration. That is the place where I learnt the values of love and family. This is the reality in which I grew up, but does not imply that I don't understand different ones." And speaking to Corriere della Sera, Gabbana said of Elton John's boycott campaign, "You preach understanding, tolerance and then you attack others? Only because someone has a different opinion? Is this a democratic or enlightened way of thinking? This is ignorance, because he ignores the fact that others might have a different opinion and that theirs is as worthy of respect as his."

But the "reality" in which a person grew up doesn't and shouldn't make it a universal truth, and saying you "oppose" someone else's choices in creating a family seems a pretty clearcut stance. And not all opinions, by the way, are worthy of equal respect. Had the design team simply backed off and said, "Hey, we're sorry," they might not now have an escalating public relations disaster on their hands. Instead, they've chosen to lash out at what they claim is "ignorance" -- and they're finding out for themselves what the "natural flow" of consequences is when you attack families for being different from your own.