My sex life is more than satisfying, but I can't seem to quit my nighttime habit -- and I'm not sure I want to 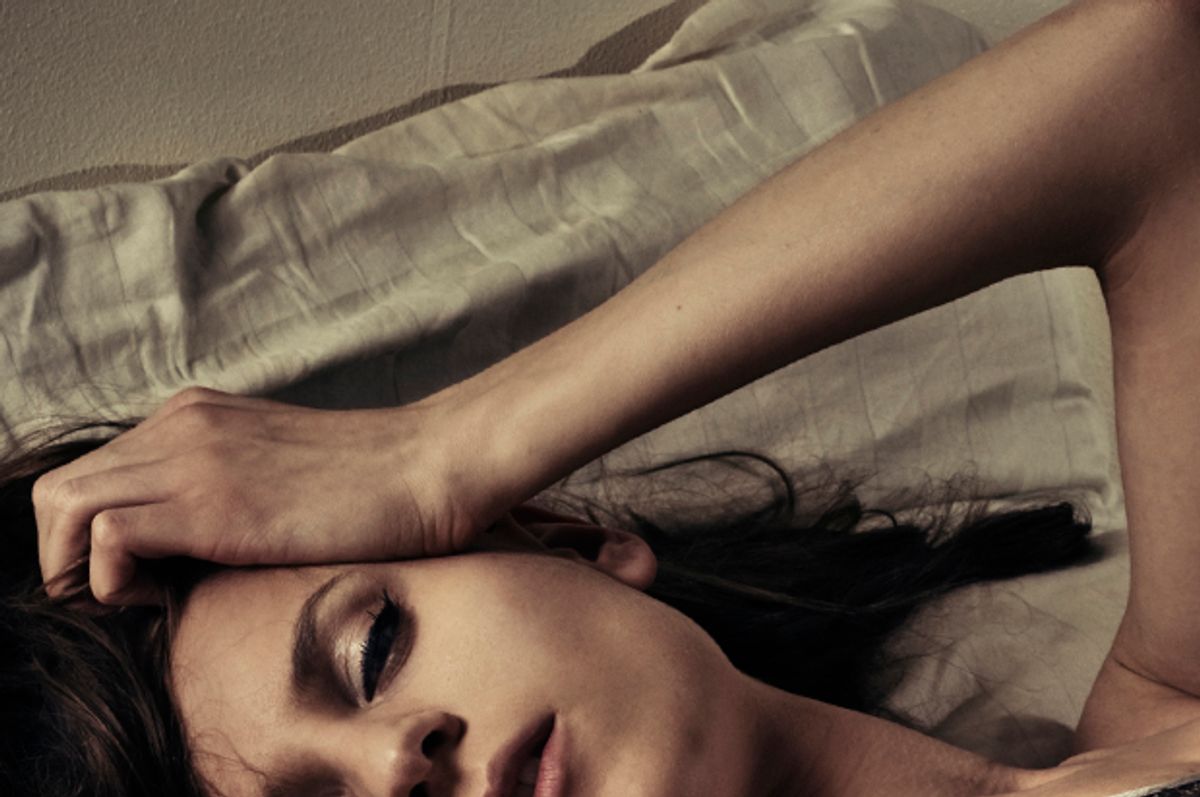 It’s past two a.m. and my husband’s breathing has become long and even. An opportunity presents itself. I slip my right hand down my pajama pants and move slowly, careful not to bump my elbow into his side rib, or bring my hips into it. Too much movement or sound will wake him, and to be found out for something like this is not just embarrassing but potentially destructive. He’ll think he doesn't satisfy me, and men do not like feeling inadequate, especially when it comes to matters of the bedroom. Or maybe he’ll feel sorry for me. And who wants to fuck someone they pity?

More from Narratively: "Off The Deep End in Captain Karl's Homemade Submarine"

Even worse, maybe he’ll finally say the words I’ve been waiting for him to say since I first told him that I am a sex addict. That he’s bored with it. He’s disgusted. He’s had enough.

I lift my wrist away from my body. I’m careful to keep my breath from becoming a pant, even as my pulse quickens, but this takes much concentration. The body desires the convulsion the mind denies. There is no letting go here though. This orgasm is a controlled, measured, calculated experience.

More from Narratively: "Getting Roasted in Grandma's Kitchen"

I have masturbated in this way next to the sleeping bodies of all my serious, committed partners who came before my husband. In some cases, as expected, it was because I wanted more sex than they could give me. I’ve been called “insatiable” and “demanding” one too many times. But this has not always been the story. Yes, I have an incredibly high sex drive, but even in relationships where I have great sex multiple times a week my nighttime stealth for self-pleasure has persisted.

My college boyfriend, burgundy haired and tattooed, had the high sex drive typical of most nineteen-year-old males. We fucked all the time, but even still, I wanted more, something only I could give me. One afternoon, after he’d fallen into a deep post-sex slumber, I serviced myself with my second, third, and fourth orgasm beside him. That was the first time I’d experienced such a level of both secrecy and shame.

More from Narratively: "Secrets of the Brooklyn Basement Domino League"

I made a promise to my husband and to myself, long before we were even wed, to be austerely honest. He knows I’ve been a compulsive masturbator since I was twelve years old. He knows about my extensive fluency in the hardcore categories of various porn sites. He knows about the bad habit I used to have of hooking up with not-so-nice men because they were available and I was bored — and that I rarely used protection with any of them. And that I believed, for a really long time, that my addiction made me a broken person, a disgusting person, a person unworthy of love. I told him these things from the start because I met him at a time in my life where I was ready and open for change. Because I liked him so much that I wanted to love him. Because I knew that the only way to love him, and be loved by him, was to be myself.

The man who will become my husband in less than a year asks me this question as he lies naked and vulnerable beside me. We’ve just had sex and although I am naked too, it isn’t until this moment that I feel just as vulnerable as him. While it might seem absurd to some, I know immediately this is a moment of great significance for us. It is an opportunity to finally do things differently.

The possibilities run through my head.

The possibility of revealing the actual truth not only makes me nervous, but also physically sick. I feel a constriction in the back of my throat, a flutter in my belly, a tremble in my extremities. After all, we’ve only been dating a couple of months and he doesn’t love me yet. If I tell him, will he ever?

“Why do you ask?” I reach for the sheet, damp with sweat, a tangle of 300-thread-count cotton across our limbs, and yank it up to cover my breasts.

“I don’t know,” he says. “Curiosity?” He turns over on his side and props his head up on his left hand. His green eyes are wide with wonder.

“Seems like a weird question.” I tuck the sheet into my armpits and scoot my body a little to the left so we’re no longer touching. The tone of my voice has become defensive and he can tell.

It can speak volumes. For one scene to stand out amongst the rest, when so many others are available, there has to be something below the surface. What maintains its appeal? What keeps a person returning in the deep, dark recesses of a lonely night? Perhaps the answers to these questions are a great source of shame. I never thought of revealing such answers to anybody, and especially not somebody like him, somebody I could really like. It seems far too risky, preposterous even.

It also seems necessary. Too many of my past relationships were doomed by my inability to tell the whole truth, to fully be myself. Now I have the opportunity to go there, and to say to a person, “This is who I am. Do you accept me?”

“Well, there’s this one gang bang,” I start, looking over at his face to see a reaction of surprise and interest register at once.

I watch his face the whole time, not pausing when his smile becomes a frown and his eyes squint as if it hurts to look at me.

“Afterward, the women exit the warehouse through a back door while the men applaud.”

For a long moment after I’ve finished talking, there is silence between us, but there is also a sense of relief on my part. I have revealed something so dark, so upsetting, so impacted in shame, and he hasn’t immediately disappeared. He is still here beside me, propped up on his left hand, naked and vulnerable, and so am I. He sees me and I see him seeing me and we are in new territory.

But then he says, “I kind of wish I hadn’t asked.” It’s all I need to hear to send me into tears. Not just tiny, embarrassed sobs, but humiliated wails. I have myself a tantrum. He is confused now as he pulls me close to him, laughing nervously at my abrupt shift in disposition. I try to pull the sheet completely over my head, but he pulls it back down and covers my face with apologetic kisses. He can’t possibly understand why I’m crying. He can’t possibly know what I’ve just revealed to him. “What’s going on? Baby, what’s wrong?”

And so I tell him.

There’s something so sad and humiliating in imagining a person locked away in a dark room, hot laptop balanced on chest, turning the volume down low, scrolling, scrolling, choosing, watching, escaping, coming.

And then realizing that person is me.

But my proclivity for solo pleasure has strong, stubborn roots. I lost my virginity to a water faucet when I was twelve years old. I have Adam Corolla and Dr. Drew to thank for this life-shaking experience; it was their late-night radio show “Loveline” on L.A.’s KROQ that served as my primary means of sex ed during my pre-teen years. This technique is one of the many things I learned, but I had a whole other kind of education going on, which had long filled my head with other ideas — sex is something that happens between a man and woman who love each other; masturbation is a sin. You know, your typical run-of-the-mill Catholic guilt stuff.

I was out of control.

Talking about my habits led me to examine them, which ultimately led to my desire for change. Holding a secret for too long is like being unable to take a full breath. I didn’t want to feel this way anymore. I needed to share — often and fully — what had for too long been silenced in order to reclaim who I was underneath my addiction. I needed to breathe again.

That’s why I need to tell my husband.

Not because I need his permission, his forgiveness or to offer him some act of contrition. But because I need him to see me. To witness. The act of telling the truth, especially about something that makes us ache, is often the only absolution we need.

Erica Garza is a writer from Los Angeles. Her essays have been published by Salon, Substance, HelloGiggles and The Manifest-Station. She is also a staff writer and travel curator at Luna Luna Mag. Read more at www.ericagarza.com.