Our toxic remake culture: Why do we insist on making the same old white-guy movies over and over? 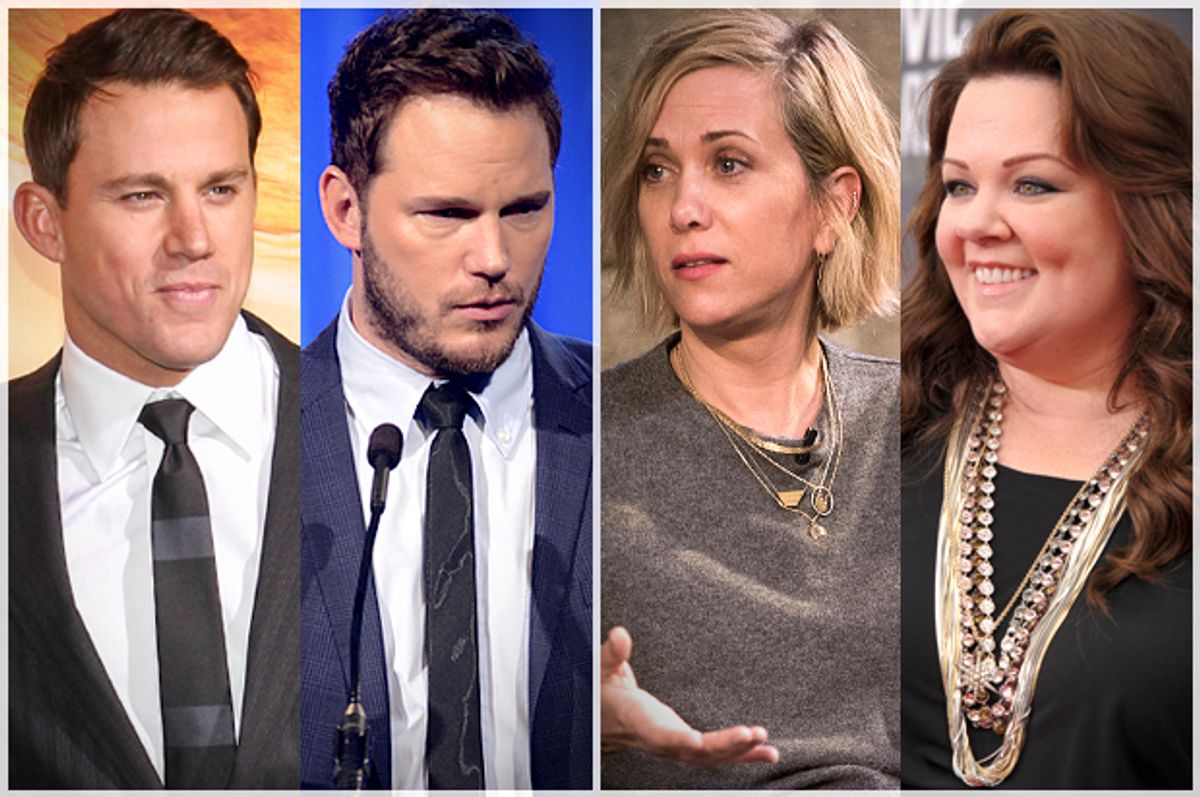 Like it or not -- despite the many, many hectoring jeremiads by the people who fall on the “not” side of the argument — "remake culture” seems to be here to stay. The most anticipated films of the upcoming year are all adaptations of or sequels to works that are decades old.

And that’s not news; these days it would be news if that weren’t true. "The Avengers," "Star Wars," "Jurassic Park" — if my 12-year-old self were magically transported to 2015 while walking up to a “Coming Attractions” marquee at a movie theater he’d probably be briefly confused about whether he’d actually gone anywhere. (The fact that "Star Wars: The Force Awakens" technically comes “next” after "Return of the Jedi" in series order doesn’t help matters.)

And we can have a long talk about possible reasons Hollywood is becoming increasingly risk-averse, from declining profit margins for theatrical releases to the increasingly bloated stock-market-like backroom trade in film rights from existing properties.

But a big reason is that studios are actually listening to their customers, and remakes are what you want.

It’s what you’re making, after all -- and by “you” I mean the vast majority of people out in the indie fan world that supposedly serves as our alternative, our escape from the moribund studio system.

What has the Internet been spending all this time making? Fan fiction, fan art, fan films. It’s hard to tell at times if the people making “gritty reboot” trailers are parodying Hollywood or unironically creating something they want -- the sheer volume of excited fans who crowd around various gritty reboot projects seems to imply the latter.

Hop onto the self-published e-books listings on Amazon and see how many of the e-books are transparently marketed as fanfic for some established franchise (and how many of those are, specifically, a well-known franchise “plus zombies”). Hop onto YouTube and see how many videos are just “remixing” the video from one well-known thing to the soundtrack of another well-known thing, or are “tributes” to an existing viral video consisting of other people exactly imitating the first video. See how exhaustive the list is of musicians who do endless cover versions of the same exhausting series of Top 40 pop songs.

And look, I don’t want to be a cranky old fart about this. I was one of the founding members of freeculture.org, I’m aware of the sayings “Pop Will Eat Itself” and “Everything’s Aa Remix.”

All art builds on other art, and some of the greatest art in history was directly inspired by the conscious desire to build on others’ work. Shakespeare borrowed all the plots from his plays from other writers; Mozart based compositions on popular folk tunes; some of the most memorable films in history are remakes, like the 1983 "Scarface."

But Mozart didn’t just cover “Twinkle, Twinkle, Little Star” on an electric guitar or ukulele in front of a webcam and call it a day. Shakespeare’s adaptations of other people’s plots are as notable for their bold changes in what they added or changed as for what they preserved -- Shakespeare’s "King Lear" is the memorable "King Lear" because it’s the one where Lear and Cordelia die, instead of preserving the “canonical” boring ending where the good guys win.

When you make something based on something else, whether you consciously label it as a remake or call it an original work taking inspiration from the past, the only reason to do it is if you’re bringing something new to the table. Some new angle, some nuance, some take on the old material that hasn’t been covered yet.

Every act of remaking is a tension between nostalgia and innovation--between the part of us that gets that warm glow of reassurance that we’re hearing the same old story again and the part of us that hungers for the excitement of hearing something new.

And, well… right now it seems like nostalgia has the upper hand. (Note that geek icon Alan Moore made an obsession with “nostalgia” one of his signs of the coming apocalypse in "Watchmen.")

Take "Ghostbusters." If there is a reason to do Ghostbusters without the classic original cast, it’d be to take the kind of action-comedy with heart that "Ghostbusters" pioneered and try it from a different perspective.

What made the original "Ghostbusters" memorable was having a bunch of comedians known for playing quirky lovable losers doing something they’d never done before--star as action heroes in a supernatural adventure to save the world.

The only way to sort of recapture that magic would be to once again bring in the most unlikely set of comedians to be action heroes fighting supernatural evil. And, of course, the only way to get more “unlikely” comedian action heroes would be to make them comedienne action heroines. We’ve come to expect comedians becoming quippy badass world-saviors, when they’re guys, but did even the most hardcore fans of Kristen Wiig or Melissa McCarthy ever imagine they’d be cheering them on against the forces of darkness in a feature film?

If you’re going to bring back "Ghostbusters" at all, this is the only defensible way to do it--to do it in a way that somewhat approximates how groundbreaking the original was, instead of doing the worst possible thing--making a "Ghostbusters" that is, itself, just another one of a long chain of movies ripping off "Ghostbusters."

And, naturally, nostalgia-addicted pop culture being what it is, the all-female "Ghostbusters" got blasted with incredible vitriolic hate, until the haters were mollified by the announcement of another, separate "Ghostbusters" remake that is exactly the shallow "Ghostbusters" rehash they were apparently hoping for.

Perhaps it’s unfair for me to say that, but come on: This project is backed by Dan Aykroyd, who’s on record as saying he wanted a “conventional” "Ghostbusters" remake after his plans for a straight-up sequel with the original cast were scuttled by Bill Murray's, justifiably, refusing to do it because it would be pointless.

And the stars? Channing Tatum and Chris Pratt, who, in sharp contrast to Melissa McCarthy, Kristen Wiig, Leslie Jones or Kate McKinnon, are exactly the people you would expect as the leads in a wacky action-comedy where lovable heroes save the world, because that’s how they’re being cast in all the other movies. You’ve got Pratt in the goofy flirty Venkman role, Tatum in the gung-ho badass-but-dorky Stantz role--just stir in Benedict Cumberbatch as Spengler to play the brainy cold-fish genius like he always does, add a black sidekick (can we borrow Terrence Howard from the "Iron Man" movies?) and, poof, you’ve replicated the 1984 formula in the most predictable way possible.

And yes, I do think it’s fair to make the prediction that the bro-busters will be more derivative, predictable and boring than their female counterparts. I’d make this prediction even if the two films had the exact same script--because casting doesn’t exist in a vacuum, and some of the most groundbreaking female characters in film started with characters written to be gender-neutral who acquired new significance when played by a woman. (Ripley from "Alien" is the most famous example.)

Unlike people who sneer about “diversity for diversity’s sake” as a negative, I’d say of all the repeated clichéd tropes that I’m sick of, one of the biggest is how the majority of stories we publish center around white male protagonists even though white guys are only 31 percent of America’s population (and 9 percent of the world’s). If nothing else, yes, a new "Ghostbusters" could improve upon the original by questioning tropes like throwing a badass actress like Sigourney Weaver into the mix only to play a damsel in distress, or having the only black character be a working-class outsider who joins the company in order to act as a foil for three white Ph.D.s.

But I don’t get the impression that the difference between the two films will just be that one cast is “more diverse” by EEOC standards. The race and gender imbalance in Hollywood is the most glaring elephant in the room in terms of conservative Hollywood sameyness, so much so that the Bechdel Test was invented to spoof what a dire sausagefest the average mainstream film’s cast is.

To look at a landscape as massively skewed as modern Hollywood and not just defend it but viscerally, emotionally defend it speaks to a bone-deep longing for familiarity, a fundamental resistance to change. It’s what gets us a sixth "Rocky" movie, a fifth "Rambo" movie and a whole film series based on the premise “Nothing About Sylvester Stallone’s Career Has to Change.” It gets us comic book “resets” that annihilate years of character development to restore them to their pristine, 1960s status. It eventually leads to death threats against community managers for video game Kickstarters for daring to draw fan art of a MegaMan-inspired character as a woman.

And yes, in case my bias isn’t showing, a deep attachment to the same old stories about the same old white guys tends to betray a lack of creativity in other areas. Whitewashed films are generally not good films.

The TV series "Avatar: The Last Airbender" earned critical praise and a massive cult following for its innovative style, and the groundbreaking decision to imagine a fantasy world where Caucasian-looking people simply did not exist was an integral element in that style. When M. Night Shyamalan demonstrated he didn’t get why the race of the characters mattered and instead did standard Hollywood white-centric casting, it was a predictable sign that he didn’t get anything else about why the series was unique and instead made a generic, forgettable heroic-fantasy action movie.

Same with Khan as played by Ricardo Montalban being one of the most memorable "Star Trek" villains ever--the only one to graduate from the original TV series to the silver screen--only for "Star Trek Into Darkness" to cast Benedict Cumberbatch to play him in the reboot. Again, the issue wasn’t simply that the character’s race was changed--it was that blithely changing the character’s race was merely symptomatic of apparently not caring what the character was about and treating him as interchangeable with the Standard Creepy Benedict Cumberbatch Character.

The reactionary demand for a steady diet of the familiar is most obvious and most damaging when it comes to issues like race and gender but it rarely stops there. The people outraged at Spider-Man being anything other than white are the same kind of people who react with violent outrage to changing how Spider-Man’s powers work or altering the same familiar origin story that we’ve already rehashed countless unnecessary times.

So yes, I’m extremely opposed to the bone being thrown to the cultural reactionaries with the all-new all-male "Ghostbusters," not because I’m opposed to whiteness or maleness on principle, but because in media whiteness and maleness tend to go with sameness, and I’ve had all the sameness I can stand. I support diversity in media not just because diversity is valuable “for diversity’s sake,” though it is, but because it’s the people willing to throw out the tired white male protagonist formula who are willing to throw out formulas in general--and in the Age of the Remake that’s the most precious quality a creator can have.