This is an extremist madman: The Israeli politician who calls for beheadings, and the Republicans who allow it

"Those who are against us, there's nothing to be done – we need to pick up an ax and cut off his head" 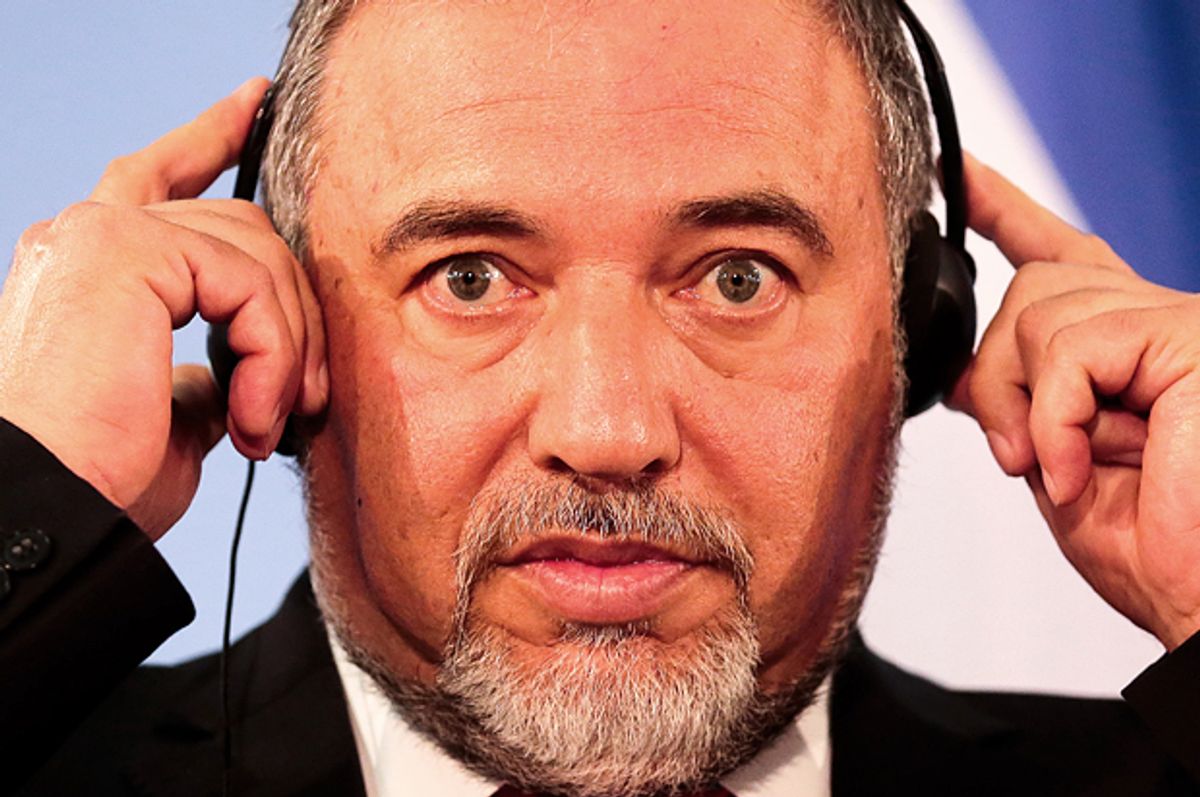 It was the kind of threat you’d expect to hear from the Islamic State – so extreme it made you want to rub your eyes in disbelief.  But there was Israel’s foreign minister, Avigdor Lieberman, on the campaign trail, calling for the beheading of disloyal Arab citizens of Israel.  "Those who are against us, there's nothing to be done – we need to pick up an ax and cut off his head," said Israel’s foreign minister last week. "Otherwise we won't survive here."

Lieberman’s extremism is well known.  He frequently calls for loyalty oaths of “Israeli Arabs,” as Palestinians are known in Israel.  And in the face of the Arab “demographic threat,” he has repeatedly advocated “transfer” of those Palestinians out of Israel and into the West Bank – choosing the state’s Jewishness over democracy.  Yet Lieberman’s ISIS-like  statement was extreme even for him.  It was covered in the Israeli press, and the Palestinian Authority called for Lieberman’s arrest.  In the U.S., however, the news -- the foreign minister of a close ally endorsing the execution of Arab citizens he deems disloyal -- was met mostly with a curious silence.

Sadly, there’s little reason for surprise here.  Israeli officials’ words and actions – the deadly 2014 assault on Gaza that killed 500 children and nearly 1,000 other civilians; endlessly expanding West Bank settlements that force Palestinians into ever smaller pockets surrounded by military occupation; death threats from the foreign minister – take place without fear of consequence from Israel’s American benefactors.  (One can imagine, however, the justified outrage if a Palestinian official called for the beheading of Jews.)

The impunity now takes new form.  On March 3, mostly Republican members of Congress rose like automatons, 29 times, to cheer the leader of a government under multiple international inquiries into war crimes in Gaza.  The deaths of 1400 civilians in Gaza, the 108,000 made homeless, the children who died of hypothermia, and the utter devastation which could take decades to repair, is framed as part of Israel’s “right to defend itself.”  (In this frame, Palestinians are not accorded such rights.)

Now, however, as Republican members of congress attempt to extend Israel’s impunity, allowing it to meddle in sensitive U.S. nuclear negotiations with Iran, questions of loyalty arise.  Analysis varies as to whether Arkansas Sen. Tom Cotton and his 46 Republican cadres crossed the line of treason with their condescending and ill-informed letter to Iran; it appears they did not.  But at the very least, in openly attempting to scuttle a U.S.-Iranian agreement, they were undermining American interests in favor of Israel’s, as narrowly defined by an influential group representing AIPAC, neocon architects of the Iraq war, and the hard-right American casino magnate, billionaire Sheldon Adelson.

Cotton, the newly elected neocon darling, has received substantial campaign contributions from Adelson, a key promoter of Israeli settlements, close ally to Netanyahu, publisher of an influential right-wing newspaper in Israel, and bankroller of many other Republican hardliners.  In 2012, Adelson spent more than $100 million in a failed attempt to defeat President Obama.  A fierce opponent of any agreement with Iran, Adelson instead promotes a U.S. nuclear first strike in the Iranian desert, to show their leaders that “we mean business.”

Another of Cotton’s benefactors is the Emergency Committee for Israel, whose founder, William Kristol, helped forge the bogus justification for the American invasion of Iraq.  Kristol promised a “two-month war” in Iraq; now he is part of the neocon saber-rattling campaign against Iran.  His Emergency Committee, according to Lobelog’s Eli Clifton, provided nearly $1 million dollars in advertising funds for Cotton’s successful Senate campaign.  Elliot Management, the hedge fund of billionaire and Republican Jewish Coalition board member Paul Singer, gave $165,000 to Cotton’s campaign.

And then there is AIPAC, which, according to Connie Bruck’s brilliantly-reported September 1, 2014 article in the New Yorker, provides “considerable input” in drafting legislation that is presented under the name of its sponsoring member of Congress.  It appears this was the also case with the letter from the 47 senators.  “On all matters relating to Israel and the Middle East in general, AIPAC writes the legislation (or letters, resolutions, etc) which are then handed over to legislators to drop in the hopper, gather cosponsors, and get it passed or sent,” writes MJ Rosenberg, a former AIPAC staffer who is now sharply critical of the Israel lobby.  “Not only that, the ideas for these initiatives come out of AIPAC rather than (as is usually the case with lobbies) starting with the Member of Congress who then asks the lobby for help with drafting.  AIPAC does it all, from soup to nuts…I know this because back in my days working as a Congressional aide, I participated in that process. Mea culpa!”

Are the 47 senators thus guilty of harboring greater loyalty to Israel and its lobby than to their own nation’s interests?  Perhaps Cotton and his Senate colleagues are acting on the sincere conviction that, in attempting to undermine sensitive nuclear negotiations with Iran, they are simply representing the American interest as they see it.  However, AIPAC, representing Israel and Netanyahu’s interests, has a history of using its Congressional influence to try to destroy any such agreement by pushing for ever more crippling economic sanctions.  “We told them directly that a sanctions bill would blow up the negotiations – the Iranians would walk away from the table,” a senior administration official told the New Yorker’s Bruck.  “They said, ‘This bill is to strengthen your hand in diplomacy.’  We kept saying, ‘It doesn’t strengthen our hand in diplomacy.  Why do you know better than we do what strengthens our hand? Nobody involved in the diplomacy thinks that.’”  This year, with the DNA of AIPAC and pro-Israel hardliners apparently in the letter from the 47 senators, questions of Congressional loyalties remain.

In recent months, however, there has been notable pushback from the Obama administration.  In late 2013 the White House sharply opposed AIPAC’s sanctions bill.  Sixteen months later, in the wake of John Boehner’s ill-advised Congressional invitation to Netanyahu, the White House isolated Israel, suggesting it could no longer be trusted with U.S. intelligence.  And shortly before Netanyahu’s address to the Congress, the White House announced that Robert Malley, vilified by segments of the Israel lobby as being too pro-Palestinian, would head the Middle East desk at the National Security Council.

Taken together, these developments are part of a steady deterioration in the U.S.-Israeli relationship, now at its lowest point in decades.  The time of impunity for Israel and its American lobby, of actions and words without repercussions, may be coming to an end.