Welcome to "Libertarian Island": How these One Percenters are creating a dystopian nightmare

Take Ayn Rand, some tech billionaires and Rand Paul -- and the result is a scary new movement. Here's their plan 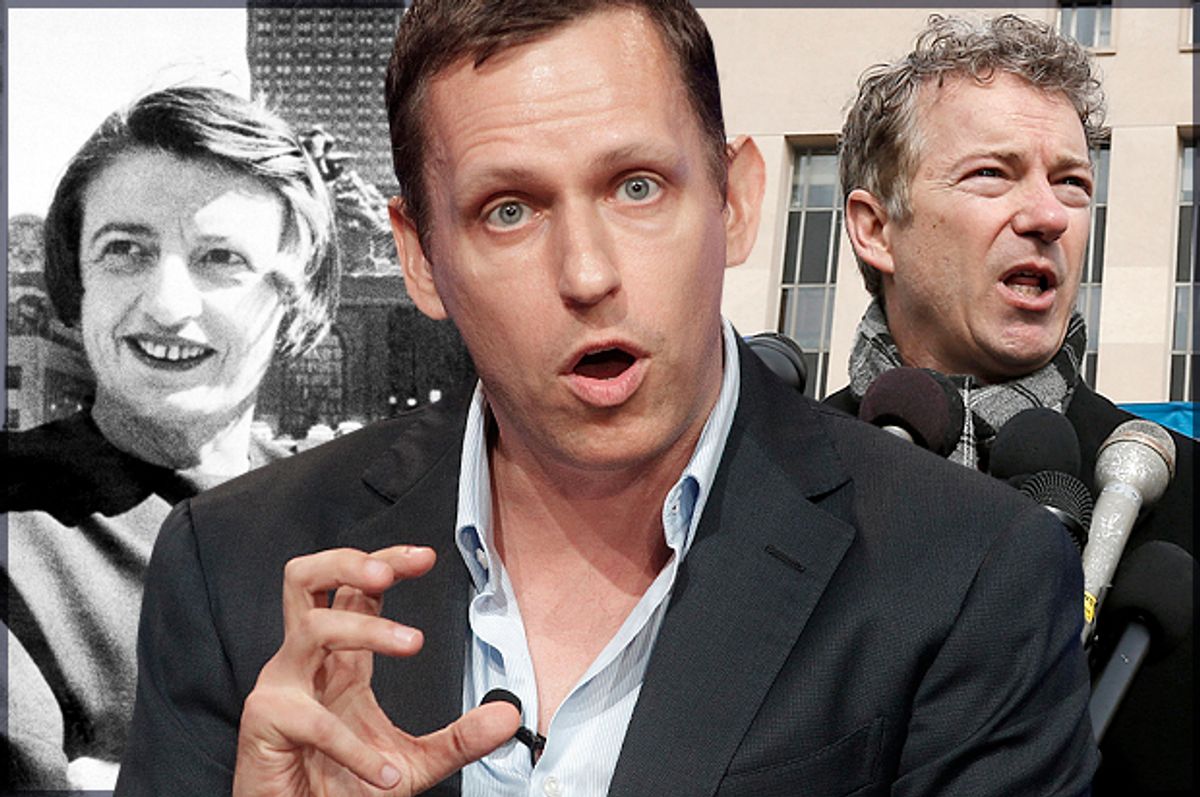 In the clever science fiction video game Bioshock, an Objectivist business magnate named Andrew Ryan (recognize those initials?) creates an underwater city, where the world's elite members can flourish free from the controls of government. It is a utopian village that Ayn Rand and her hero John Galt would surely approve of, but unfortunately it ends up becoming a dystopian nightmare after class distinctions form (what a shocker) and technological innovation gets out of hand. It was a hell of a video game, for those of you into that kind of thing.

But I don’t bring up Bioshock to talk about video games. I bring it up because there is currently a similar movement happening in real life, and it is being funded by another rather eccentric businessman, the Paypal billionaire Peter Thiel. As some may already know, Thiel has teamed up with the grandson of libertarian icon Milton Friedman, Patri Friedman, to try and develop a “seastead,” or a permanent and autonomous dwelling at sea. Friedman formed the “Seasteading Institute” in 2008, and Thiel has donated more than a million dollars to fund its creation.

It is all very utopian, to say the least. But on the website, they claim a floating city could be just years away. The real trick is finding a proper location to build this twenty-first century atlantis. Currently, they are attempting to find a host nation that will allow the floating city somewhat close to land, for the calm waters and ability to easily travel to and from the seastead.

The project has been coined “libertarian island,” and it reveals a building movement within Silicon Valley; a sort of free market techno-capitalist faction that seems to come right out of Ayn Rand's imagination. And as with all utopian ideologies, it is very appealing, especially when you live in a land where everything seems possible, with the proper technological advancements.

Tech billionaires like Thiel, Travis Kalanick and Marc Andressen, are leading the libertarian revolution in the land of computers, and it is not a surprising place for this laissez faire ideology to flourish. Silicon Valley is generally considered to have a laid back Californian culture, but behind all of the polite cordialities, there rests a necessary cutthroat attitude. A perfect example of this was Steve Jobs, who was so revered by the community, and much of the world, yet almost psychopathically merciless. The recent anti-trust case against the big tech companies like Google, Apple, and Intel, who colluded not to recruit each others employees, has even lead to speculation as to whether Jobs should be in jail today, if he were still alive.

So while Silicon Valley is no doubt a socially progressive place (i.e. gay marriage), if one looks past social beliefs, there is as much ruthlessness as you’d expect in any capitalist industry. Look at the offshore tax avoidance, the despicable overseas working conditions, the outright violations of privacy and illegal behavior. There is a very real arrogance within Silicon Valley that seems to care little about rules and regulations.

Libertarianism preaches a night-watchmen government that stays out of businesses way, and allows private industries to regulate themselves. It is a utopian ideology, as was communism, that has an almost religious-like faith in the free market, and an absolute distrust of any government. It is a perfect philosophy for a large corporation, like Apple, Google or Facebook. If we lived in an ideal libertarian society, these companies would not have to avoid taxes, because they would be non-existent, and they wouldn’t have to worry about annoying restrictions on privacy. In a libertarian society, these companies could regulate their own actions, and surely Google, with their famous “Don’t be evil” slogan, believes in corporate altruism.

In the Valley, innovation and entrepreneurship is everything, so a blind faith in the market is hardly shocking. And last year one of the leading libertarians, Rand Paul, flew out to San Francisco to speak at the Lincoln Labs Reboot Conference, held to “create and support a community of like-minded individuals who desire to advance liberty in the public square with the use of technology.” Paul said at the conference, “use your ingenuity, use your big head to think of solutions the marketplace can figure out, that the idiots and trolls in Washington will never come up with," surely earning laughs and pats on the back.

Rand Paul has had one on one meetings with Mark Zuckerberg, and the floating island billionaire himself, Peter Thiel. The founder and CEO of Uber, Travis Kalanick is another noted libertarian, who used to have the cover of Ayn Rand’s “The Fountainhead” as his twitter icon. Kalanick runs Uber just as a devoted follower of Ayn Rand would, continuously fighting regulators and living by what writer Paul Carr has called the “cult of disruption.” Carr nicely summarizes the philosophy of this cult: “In a digitally connected age, there’s absolutely no need for public carriage laws (or hotel laws, or food safety laws, or… or…) because the market will quickly move to drive out bad actors. If an Uber driver behaves badly, his low star rating will soon push him out of business.”

So basically, with the internet, regulation has become nothing more than a outdated relic of the past, and today consumers truly have the power to make corporations behave by speaking out on social media, or providing negative ratings on Yelp, or filing a petition on Change.com, etc. It is the same old libertarian argument wrapped up in a new millennial cloak, that corporations will act ethically because if they don’t, consumers will go elsewhere.

As usual, it leaves out important realities that don’t sit well with the self-regulation myth. These realities include the irrationality and apathy of consumers, the lack of information available to consumers, and the overall secretive nature of corporations. The problem with self-regulation is that, consumers do not know what goes on at a corporation behind closed doors, so how would they force a company to act ethically if they are not aware of their misdeeds. Had the government not gone after Google for privacy violations, users would have never known. Google and other tech companies have a constant crave for innovation over everything, and bypass things like privacy when they get in its way. Would they control themselves had the government not stepped in?

Another important truth is that many consumers usually continue willfully using products, even if a company has done something that is contrary to their moral beliefs. It is a sort of hypocritical selfishness where one puts comfort or convenience over ethics. Just look at Apple: everyone is aware of the appalling factory conditions and the tax avoidance, but that doesn’t stop many people from buying the latest iPhone.

When looking at other industries, like oil and gas, the myth of self-regulation is even more comical. The famous oil billionaire Koch brothers, who are also fanatic libertarians,  have knowingly avoided regulations, and have hurt people in the process. During the nineties, they were particularly careless, and the bottom line influenced every decision. When pipelines were in bad shape, they would determine whether fixing them or leaving them, and possibly paying off a lawsuit in the future, was more profitable. In 1996, a pipeline that had been given the second treatment leaked butane into the air, and killed two teenagers who ignited it with the spark of their car ignition.

Even if the consumers were completely rational and had access to all information, would it really be worth it to wait for companies to abide? For example, many libertarians argue that legislation that made seat belts and airbags mandatory in all vehicles was pointless, because the free market would have eventually brought them anyways. But even if this were true, how long would it take, and how many lives could this inaction have caused?

The most damning evidence against the myth of self regulation may very well be history. Before government regulatory agencies like the FDA came around, the safety of workers and consumers were both constantly at stake, as muckrakers like Upton Sinclair described so vividly. More recently, the lack of regulation in the financial industry, particularly in derivatives, contributed to one of the worst economic crises in history, and hurt many people in the process.

Libertarians are uninterested in these realities, and believe that all government intervention is useless and stifles innovation, and it is the “cult of innovation” that makes the libertarian philosophy particularly popular in the technology obsessed Silicon Valley. In the their world, innovation is more important than privacy or safety, and the best and brightest should not have to play by the rules.

While overall, Silicon Valley still supports the Democrats over Republicans, it would not be surprising to see a shift in the coming years. The libertarian philosophy is very attractive to those who worship technology and entrepreneurship, which is nearly all of the techies. And with millions of potential campaign dollars coming out of the valley, it could very well be a problematic territory for liberals in the future.