“Community”: Not as brilliant as it once was, but some greatness survives 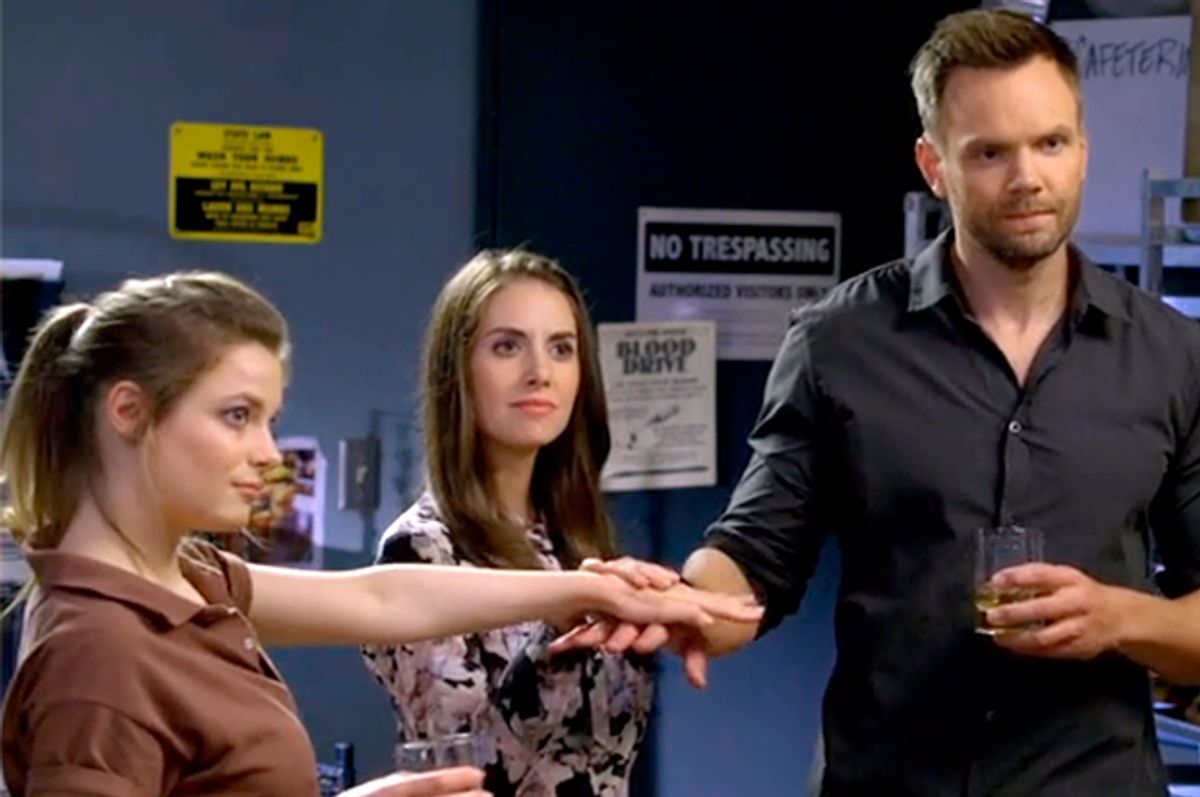 The opening credits to “Community” have not been significantly updated. Which is weird, because the show’s cast has changed quite a bit. Chevy Chase’s character, Pierce, died off-screen between the fourth and fifth seasons; Donald Glover and Yvette Nicole Brown left the show to pursue other projects. Of the original cast members, that leaves six; of the original members of the study group, that leaves just four—Jeff (Joel McHale), Abed (Danny Pudi), Britta (Gillian Jacobs), Annie (Alison Brie).

“Community” captured my heart through those credits—less because of the visuals, a paper fortuneteller that opens up to reveal the cast members’ names with appropriate doodles, and more because of the song, “At Least It Was Here,” by the 88. The oft-discussed heart of “Community”—the lovely empathy it created for its characters, the repeated emphasis on connection over isolation, and the sense of community that created actual community, in the enthusiasm of its dedicated fans—was encapsulated by the upbeat, slightly desperate lyrics: “We could be roped up, tied up, dead in a year / I can’t count the reasons I should stay / one by one, they all just fade away.” Interpretations vary (and tend to discuss suicide), but if the song is posing a question (why stay?), the show provides the answer: “Community.” (Whether that refers to the abstract concept of togetherness, or the work of doing the show, is also open to interpretation.)

In place of where Chase’s, Glover’s and Brown’s names were in the fortuneteller are just extra doodles; they unfold and take up time in the same way that the cast members’ names do. It’s so weirdly hacky that it seems intentional—maybe as the season goes on, the spots will be filled with new actors’ names. In the meantime, as the first and second episodes debut today, it’s a kind of memento mori set to an already somewhat morbid song—these are the spaces where people’s names used to be, but they aren’t here anymore. Their reasons to stay, presumably, all faded away.

“Community” has had a bizarre life, for a TV show: lukewarm ratings; an on-again, off-again relationship with its creator, Dan Harmon; a second life, now, on Yahoo, where the sixth season will be released online, weekly on Tuesdays. (The first two episodes, “Ladders” and “Lawnmower Maintenance and Postnatal Care,” are now available.) Love for the show—from its stars, fans and crew—have kept “Community” alive, in some form or another, well past what seemed like its expiration date. But now that the show is inching closer and closer to six seasons and a movie—a joke from the show that turned into the series’ rallying cry—how do we feel about getting what we wanted all along? The price of six seasons is a depleted cast, a new platform and a show that is both very familiar and very alien.

But there is no show better equipped than “Community” to be bounced around from network to network, pulled from the schedule, burned off back-to-back on Fridays, and to suffer behind-the-scenes upheaval. “Community” is a show that knows it’s a TV show, and much of its charm and humor comes from the show’s eagerness to address just that fact. Season 6 of the show is going to need a few episodes to find its feet, but that “Community” tone is still there, still sharp.

Much of that is due to the continued unique voice of creator Dan Harmon, the divisive figure who feuded with Chevy Chase and burned bridges at NBC. There doesn’t seem to be an upper limit to the number of stories Harmon wants to tell—or to the fantastical little sideshows he’s willing to wholeheartedly pursue, from Troy and Abed’s impromptu, nonsensical Spanish rap to the Claymation musical episode.

It helps that the four remaining study group members—although now the study group is the “Save Greendale” committee—are four of the show’s strongest performers and characters who have routinely had something cogent to do. It also helps that one of the remaining characters is Danny Pudi’s Abed, who has long been the emotional center of the show. Asshole Jeff is the show’s protagonist, but it’s Abed’s stories that tend to drive the storytelling. Abed’s the character who’s always informing everyone else that they’re in a TV show, because TV is his primer for socializing with other people. So in “Ladders,” the first episode of the sixth season, he interrogates a new character about whether she’s “quirky enough” to be part of their ensemble, or if she’s too much like Annie, in temperament and appearance. And when he learns Shirley has moved away from Greendale, he asks his friends: “Did she spin off?”

Harmon’s interest lies with Abed, and with fleshing out and making real his vision of the world. So the last bit of “Ladders,” over the credits, is a fake NBC promo for Shirley’s new show, “The Butcher and the Baker,” starring Steven Weber, no less. It’s amazing—first, for the involvement of Yvette Nicole Brown, who presumably agreed to cameo even after she didn’t sign on for the rest of the show; second, for the overwrought and hilarious dialogue, in which Shirley tells her detective (played, obviously, by Steven Weber, because who else would play a crotchety detective in an NBC pilot) that she will be his legs until he finds his wife’s killer—or his legs! Even the font choices sync up with NBC’s current marketing. “Community” is Abed’s world made real, and “Ladders” uses him as a proxy for the show itself, choosing between a fantasy speakeasy in the basement (long story) and the difficult-to-montage, boring work of sending emails and getting results.

“Community” is not as brilliant as it was, no. Fans will be pleased with 13 more installments of Harmon’s vision, but the show has lost some of the shine of its youth. Still, when this all finally makes it to Hulu or Netflix, it will make for a fascinating snapshot of television history, as a show about television survived this era’s pressures on television by evolving past ratings and networks to become an artifact worth saving. And in its ambition and execution, it still provides more than a few reasons you should stay with it.