CNN's insane debate over "Who can say" the N-word

Don Lemon and company fret over who's "keeping the word alive" 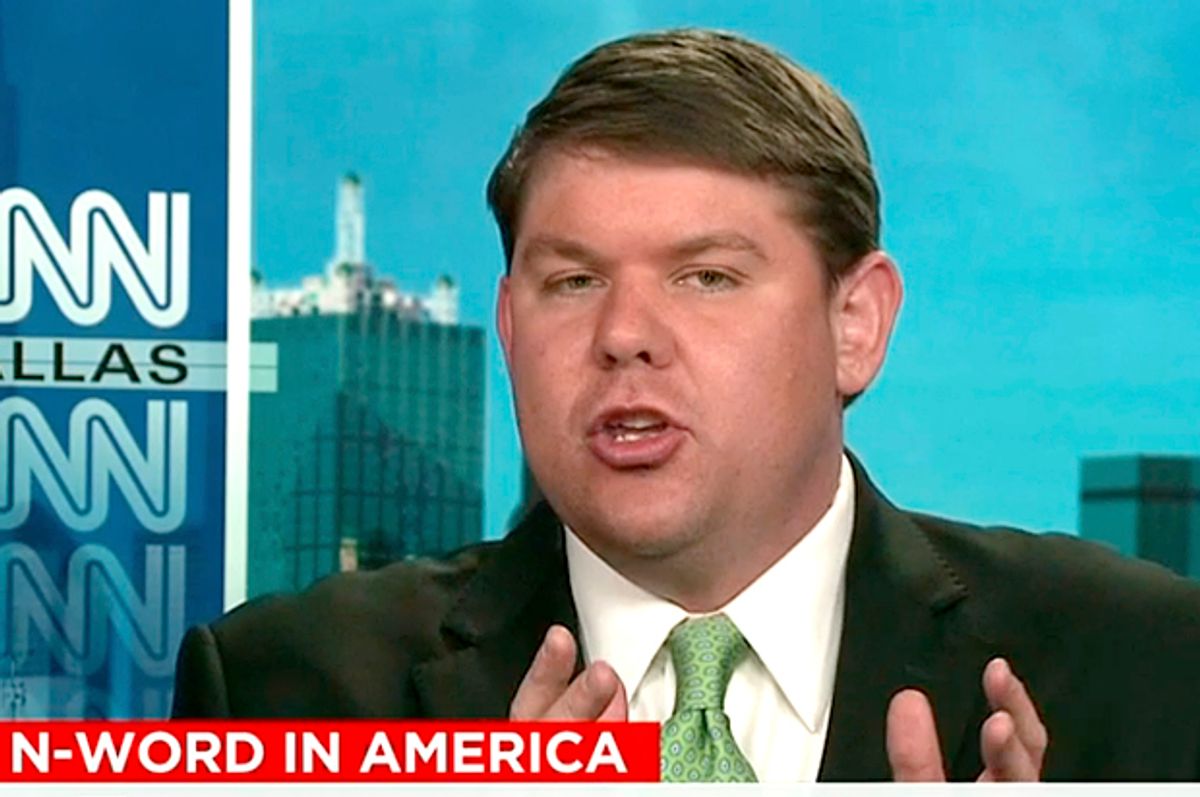 "If I use the N-word," Ben Ferguson complains, "it could quite possibly, and honestly probably should, cost me my career." And that's really what this is about, isn't it? That terrible, terrible unfairness for white people.

On "CNN Tonight" Monday, the age-old debate over "who can say the N-word" resulted in a predictable amount of sputtering. "Who can say it? Who decides?" asked the network, in full troll mode. At specific issue in the endless "Why do you get to have it and I can't?" debate this time around is the recent controversy over the University of Oklahoma's Sigma Alpha Epsilon house, which earlier this month gained attention when a video of white students chanting, "There will never be a n____r SAE. You can hang 'em from a tree," emerged. Soon after, a 2013 Vine of house mother "Mom B." dropping seven N bombs in succession as Trinidad James' "All Gold Everything" plays in the background also appeared. In a statement, the woman explained, "I was singing along to a Trinidad song, but completely understand how the video must appear in the context of the events that occurred this week." And James himself said there was a distinction between the frat boys chanting and the house mom repeating lyrics, noting, "I'm upset at the fraternity because what they're saying is a chant that's just completely disrespectful to the black race. As far as that lady goes -- man, that's an old lady, man. Let that lady be…. If it's somebody that you've been rocking with or we're listening to music or whatever, I can't be upset."

On CNN Monday, commentator Marc Lamont Hill observed, "I'm always fascinated at the amount of burden and pressure people put on rap artists to police their language…. Often times white people are trying to legislate the N-word for black people, saying, 'None of you people should use it.' No, that's not your call to make."

But that boundary was insufficient for the conservative Ferguson, who asked, "Do we want the N-word being used out in society, or do we want to stop the N-word, which has become so as it is so racially divisive?" Hill promptly responded with an amused, "Did you just ask if the N-word has become racially divisive?" But Ferguson pressed on, insisting, "We all condemn it when it's said, but then you want to keep the word alive. I think you know we should probably get rid of the N-word, but in reality I think many rappers are afraid they'll lose out in money and sales and street cred if they don't stop using the word."

Trinidad James then rebutted that assertion, saying, "We use the word because that's how we came up…. We came up using the word as, 'How you doing, my n____r?' And that means, bro, you're my friend. I will call you, Ben, my n____r, and when I call you that, you do not feel that I hate you." This then led to the greatest interracial N-word summit since "Curb Your Enthusiasm," with Don Lemon asking if it would be permissible for Ben to return the sentiment. (Ferguson wisely declined to do so.) Remember last week, when Lemon helpfully presented the Ku Klux Klan point of view? This may have been weirder. "I don't understand," Ferguson went on, "when we know how divisive this word is."

"You're giving the word too much power. I'm making money off being music and being creative, sir," James responded. "I'm not making money just because I use the N-word. Nobody goes to buy an album because it's full of the N-word." Yet this notion remains puzzling to people like Ferguson, along with the numerous trolls who always come out of the woodwork demanding explanations for who gets a different share of the language. Behold a hurtful, shocking word. But dammit if Kanye gets to have it why can't everybody? Yeah, why is everything so unequal? For white people?

Here's the thing, my fellow Caucasians: It's really not that hard not to use it. I would still argue that, precisely because of its incendiary power, it's occasionally useful for news media to quote racist material directly and in context. Five years ago, when audio recordings of Mel Gibson's obscenity and epithet-fueled tirades went public, the uncensored version of his words revealed the full impact of his grotesqueness. As individuals, though, even if you love hip-hop, I promise you can avoid saying it yourself. And when pundits ridiculously talk about "getting rid of" words, they are talking nonsense, because words aren't to be gotten rid of like they're cigarettes in restaurants. That's not how language works. Language evolves, and sometimes that means words are appropriated in different ways for different groups. I get that these things are subtle and that they have to be learned. I get that a kid needs to be taught that his friends use words with each other that would hurtful coming from someone of a different race. But this isn't that difficult a lesson to impart. And if you're not having conversations about these things, if you're not actively trying to figure out how to be respectful and sensitive to other people instead of telling them how they ought to behave, you're squandering your time.

Trinidad James understands that there's a difference between using a word as a slur against a group of people and using it to quote a lyric. But as Hill explains, "White people were saying n____r before Trinidad James was born. And to sit here and say that the N-word has become divisive is absurd. The N-word is born out of slavery. It's born out of white supremacy…. Maybe, just maybe, it's not white people's position to tell black people what to say…. I'm not saying it should be illegal for white people to use the word; I'm saying you all shouldn't want to use it, after four hundred years of exploitation and institutional racism."