Laugh or cry: A Google exec repeatedly interrupted one of tech's most powerful women while talking about diversity 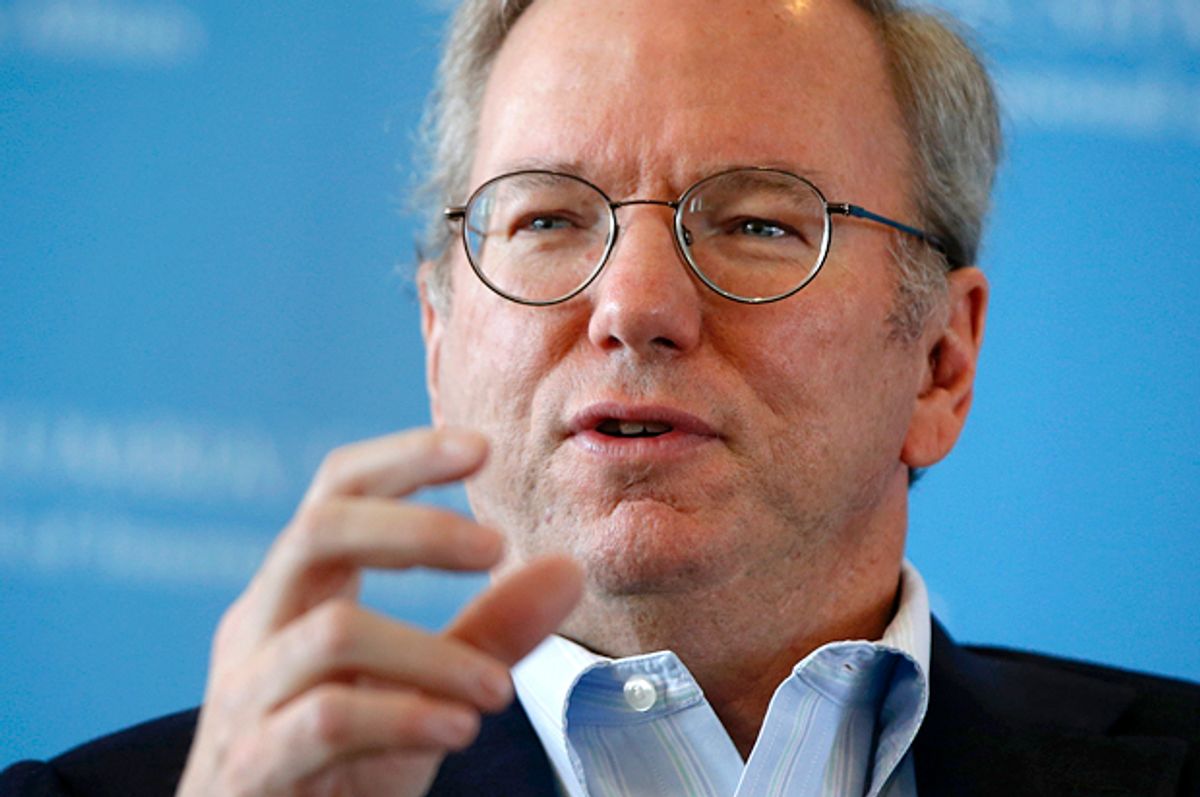 It is equal parts hilarious and depressing that Google executive chairman Eric Schmidt was called out for repeatedly interrupting Megan Smith, chief technology officer for the United States, while trying to talk about diversity and women in tech.

The SXSW panel, which hosted Smith, Schmidt and Steve Jobs biographer Walter Isaacson, was about innovation in tech, and so the conversation turned to attracting new talent and bringing more women and people of color into the field to spur new ideas.

It seems that the crowd noticed that Schmidt was regularly interrupting Smith to share his own views about diversity, so someone in the audience brought it up during the question and answer period. According to a report from Karissa Bell at Mashable, the questioner asked, “Given that unconscious bias research tells us that women are interrupted a lot more than men, I'm wondering if you are aware that you have interrupted Megan many more times.”

The person behind the question, in another delightful twist, happened to be Judith Williams, head of Google’s global diversity and talent management program. For her part, as Bell pointed out, Smith replied that, “It's an interesting thing, unconscious bias. It's something we all have and it's something we have to really debug."

But this is tricky work, and there isn’t a single solution to the problem. Sexism in tech, like sexism in general, is a structural issue. But destructive gender norms that act as barriers to women’s entry and promotion are also enforced in really subtle ways on an interpersonal level. Contending with a rude co-panelist who won’t let you get a word in, laughing off or ignoring that sexist joke your boss told, or finding that, once again, you are the one taking notes at that meeting may seem like small things, but they add up. It’s like career death by a thousand paper cuts.

According to one study on this dynamic from Kieran Snyder, the men in her sample group interrupt twice as often as women. They were also three times as likely to interrupt women than they are to interrupt other men:

All told and no other factors considered, men accounted for 212 of the 314 total interruptions, about two thirds of the total. Among the individuals I observed, 60% were men. That means that if men and women had shown the same rate of interruption, we would expect to find that 188.4 of the interruptions came from men. We actually see 212. The men I observed interrupted twice as often as the women did.

So there you have it: At least in this male-heavy tech setting, men do interrupt more often than women.

So what would it mean to “debug” in these situations? Put bluntly, if men in male-dominated fields like tech (and politics and venture capital and journalism and and and...) are serious about diversity and women’s leadership, then they need to STFU more often. Literally. The problem will not be solved by women leaning in. Instead, men need to lean back. Hard.

This means not interrupting and listening to women when they’re speaking, but also requires men to be mindful of when they’re dominating the conversation. This is a pretty common occurrence, both in Silicon Valley boardrooms and, like, anarchist collective meetings. And just because men may be louder and more aggressive about speaking doesn't mean they are more knowledgable -- there are studies that show that men tend to talk more than women even when they don’t know what the hell they are talking about. (Rebecca Solnit's "Men Explain Things to Me" is kind of the mic drop on this issue.)

But beyond just learning to be less enamored of their own voices, men in positions of power need to take on the structural work of hiring more women so that hearing women speaking -- without interruption -- becomes normal in their places of business. Sheryl Sandberg’s career advice to women is often narrowly applicable to the elite spaces she inhabits, but she has the gender hierarchies in her field pretty well pegged.

Here’s Sandberg on the problem of men interrupting their female colleagues and what to do about it in a recent column for the New York Times:

The long-term solution to the double bind of speaking while female is to increase the number of women in leadership roles. (As we noted in our previous article, research shows that when it comes to leadership skills, although men are more confident, women are more competent.) As more women enter the upper echelons of organizations, people become more accustomed to women’s contributing and leading.

Professor Burris and his colleagues studied a credit union where women made up 74 percent of supervisors and 84 percent of front-line employees. Sure enough, when women spoke up there, they were more likely to be heard than men. When President Obama held his last news conference of 2014, he called on eight reporters — all women. It made headlines worldwide. Had a politician given only men a chance to ask questions, it would not have been news; it would have been a regular day.

Men with hiring authority also need to search outside their traditional networks (as Kleiner Perkins’ star partner John Doerr put it, a steady stream of “white, male nerds who’ve dropped out of Harvard or Stanford”) and enlist talented people who are poorly represented in tech: women, people of color and queer people.

Challenging the lily whiteness and maleness of tech requires structural reforms and shifts in our daily, unconscious habits. But until the most powerful leaders in the field -- men like Schmidt -- start examining themselves and how they move through the world, we’re bound to see the SXSW panel scenario play out again and again. Only there isn't always a woman like Judith Williams to call them on it.