"P*ssy is way more sacred than penis": Azealia Banks on blackness, bisexuality and why she loves to "bring her butt out"

The rapper gets upfront, undressed and catty in a new interview for Playboy 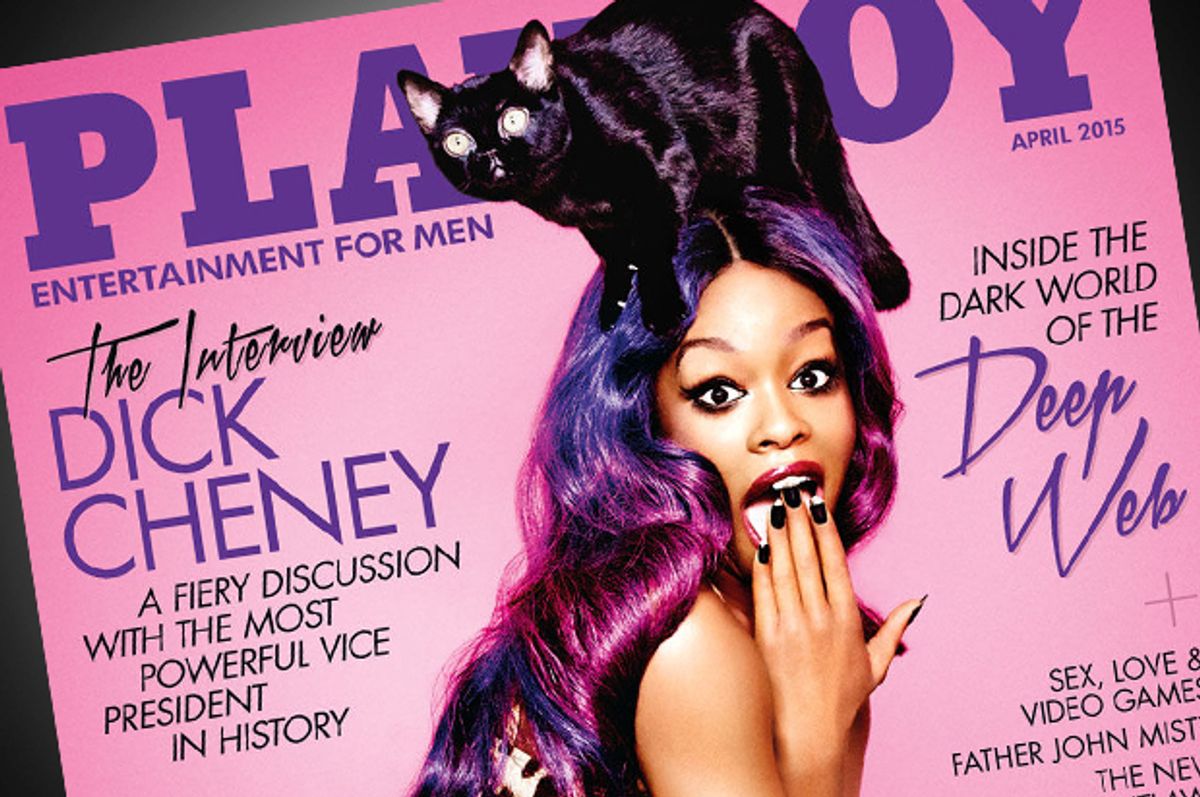 This month's issue of Playboy has two powerful names on the cover, built up by two very different sorts of résumés: Vice President Dick Cheney, and rapper Azealia Banks. One profile is certainly more entertaining and enlightening than the other...and I think you can guess which it is.

Billed as "Hip Hop's Fierce Queen" and posing playfully nude with a pair of black cats for her spread, Banks brought to her in-depth Q&A with the magazine the same brand of confident, to-the-point, no-bullshit commentary she's become known for in her music and on Twitter. She didn't shy away from a single question -- least of all the ones about reparations or getting laid. But Banks speaks well enough for herself. Let's just get to the excerpts.

On growing up in a home where sexuality was openly discussed:

My mother was always making inappropriate jokes. We had sex books in the house. She never tried to hide it from me. When I got my period it was very much like, “Boys are going to want to touch your body, but you can get pregnant now, and we not playing that shit.” My mom scared me off of getting pregnant.

On having a relationship with an abusive older man when she was 17:

I didn’t know how to shave my bush and shit like that. I had a hairy pussy. I didn’t know how to wear perfume. I had neon pink barrettes in my hair. And as “212” started to pop off and my career started to happen, he became jealous. He choked me and beat me up, and of course you should not be fucking with a man who puts his hands on you, but I was stupid and young.

On why she actively engages in public discussions about race:

I get upset when people are like, “Why don’t you just make music?” What would happen if I couldn’t sing? Then I’d just be another black bitch to y’all. It’s really fucking annoying. Black people need reparations for building this country, and we deserve way more fucking credit and respect.

On why she wasn't at all hesitant to pose for Playboy:

No, I love getting naked. It’s so funny, every time my manager arranges a photo shoot, I’m like, “Let’s do a nude photo!” And everyone’s like, “Oh, Azealia, you’re always trying to bring your butt out.” Posing for Playboy was a no-brainer. I was like, “Yes! They want to see me naked.”

And, lastly, on why she hasn't really been getting laid lately (though she should be):

I should be getting dick all the time. I like to fuck. [laughs] But I can’t just meet a guy and fuck him. I’m too afraid of getting herpes or some shit. I like to feel them out, and then I start talking about my black female problems, and we get into a conversation about race, and then we disagree and don’t have another date. Whatever. I’ll just hang out with my mother. It’s okay, because pussy is way more sacred than penis.

The rest of Banks' interview, which you can read in full here, details why she doesn't believe black people should be christians, the reasons she wants to emulate Jay-Z's career path and what motivates her more than hearing her songs played on the radio. It's well worth taking a look -- and not just for the photos.