"I am called a whore": Ashley Judd unloads on the Internet's grossest trolls 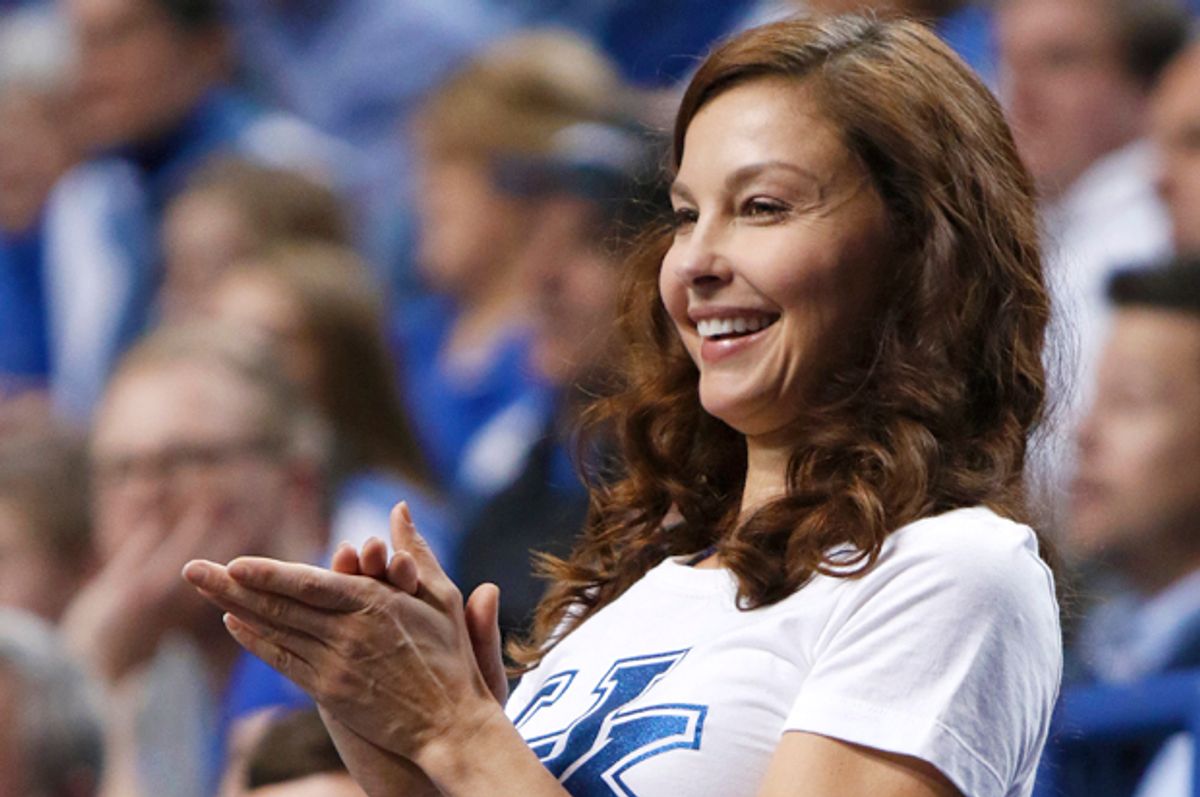 Thank you, Ashley Judd. Again. In a celebrity culture in which calling yourself a feminist is still considered a controversial stance, the actress and activist took yet another bold step this week when she called out the revolting and frightening responses women face every day online.

The University of Kentucky Wildcats fan faced a barrage of misogynist comments over the weekend after jumping into the March Madness fray --and wasted no time in publicly documenting the experience. "When I express a stout opinion during #MarchMadness I am called a whore, c---, threatened with sexual violence. Not okay," she wrote – and then proceeded to retweet some examples of the abuse she was receiving. More than that, she said she fully intended to press charges against her abusers, telling "Today," "The amount of gender violence I experience is absolutely extraordinary. A significant part of my day today will be spent filing police reports at home about gender violence that is directed at me on social media."

That Judd would take the time and effort it requires to go after the trolls is brave – but not surprising for her. Nine years ago, she wrote a lovely and articulate lecture on faith, feminism and social justice in which she neatly explained that "Feminism teaches me that all life unified, is equal and sacred, that no one person ever, ever, ever has more status, meaning, or worth, than another." In 2012, when she was taking a nasty beating in the tabloids for allegedly going from "pretty to puffy" – she righteously responded with an essay about how the snark was "pointedly nasty, gendered, and misogynistic and embodies what all girls and women in our culture, to a greater or lesser degree, endure every day, in ways both outrageous and subtle." She repeatedly puts herself out there as a voice for reproductive rights, equal pay, and help for the survivors of sexual violence. Lady, this more than makes up for the two hours of my life I lost to watching "Tooth Fairy" with my kids. And please reconsider going into politics. If you can handle Twitter bozos, you can take on anything.

It's unfortunate that Judd, like so many other women who have an online presence, has now found herself the target of a few cowards whose default response to a female with an opinion is to degrade and threaten her. Her experience is anything but unique. We've seen it again and again, like in the GamerGate fiasco, when women like Zoe Quinn and Briana Wu had to leave their homes because of explicit threats to themselves and their families, and Anita Sarkeesian had to cancel a speaking event after a threat of a mass shooting. We've see it in the experiences of women like Lindy West, who earlier this year wrote, "Being harassed on the internet is such a normal, common part of my life that I’m always surprised when other people find it surprising. You’re telling me you don’t have hundreds of men popping into your cubicle in the accounting department of your mid-sized, regional dry-goods distributor to inform you that – hmm – you’re too fat to rape, but perhaps they’ll saw you up with an electric knife? No? Just me?"

The sad fact is that social media sites like Twitter are still all but useless at handling the abuse heaped upon their female users every day. And the harsh reality is that Judd's pursuit of legal justice against the people who harassed her will probably not result in much action. But when people like her step forward and make the very simple statement that, for example, they're "not tolerating sodomy threats," they're serving notice to the trolls that their behavior is unacceptable. And after years of watching and personally experiencing a nauseating degree of this stuff, I have honestly come to believe that some of the trolls have just never entertained that thought. Read one of your worst troll's timeline sometime. A lot of them just spew hatred and violence all the day long, without any expectation of accountability. Enough already. The lazy, irresponsible, shrugging notion that being threatened and harassed is just part of the price of being online, and there's nothing to do but ignore it, has persisted too long. And it's created a culture that is wildly, disproportionately toxic to women. Judd's fight isn't just for herself; it's for all of us. Because we all deserve better.