From Gryffindor to Dauntless: "Insurgent" and our obsession with young adult sorting rituals 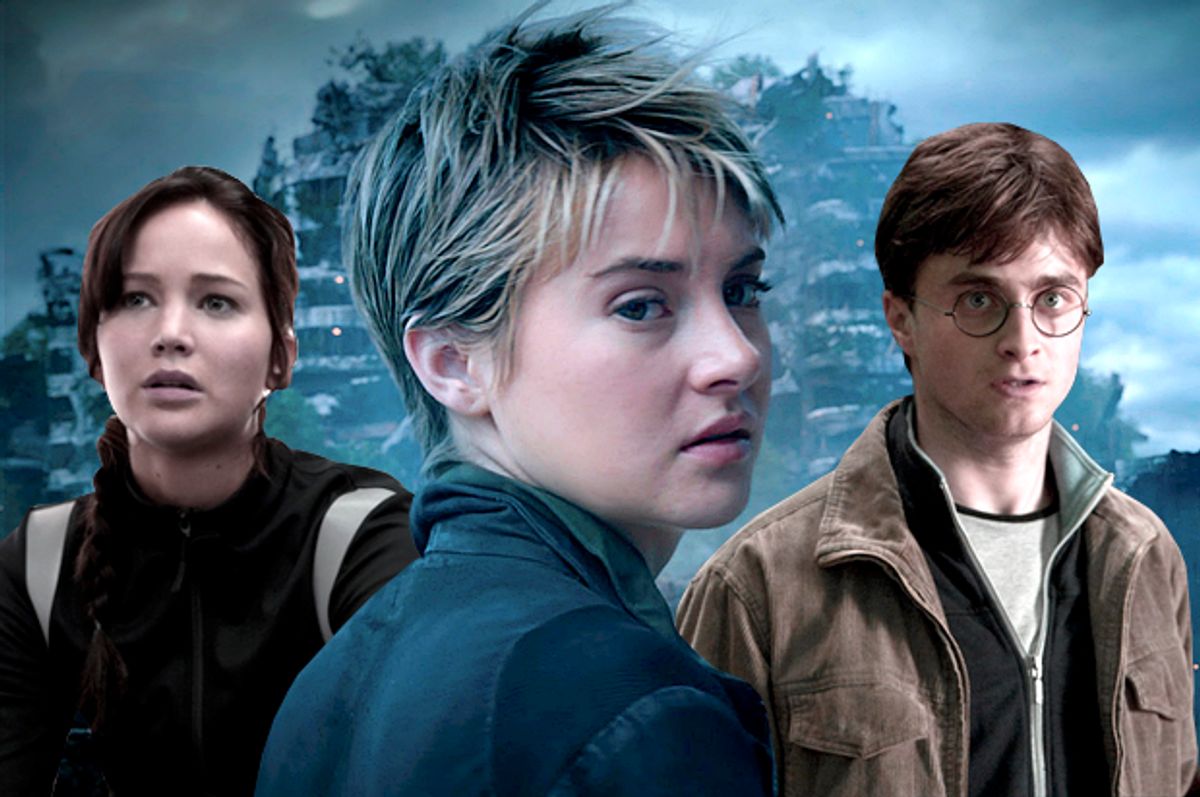 “Insurgent,” the second film based on Veronica Roth's popular “Divergent” series, comes out this Friday. Much like “The Hunger Games,” "Divergent" is about a young woman with exceptional abilities living in a highly regimented dystopian society, who is called upon to lead a revolution against the established social order. Instead of twelve districts and the "Hunger Games" tournaments, the citizens of post-apocalyptic Chicago are divided into one of five factions when they reach adulthood: Abnegation (selfless), Dauntless (brave), Erudite (smart), Amity (peaceful), and Candor (honest). Divergents, like our protagonist, Tris Prior, are those who do not fit neatly into any single faction.

The sorting ritual is a prized trope of young adult literature. Long before Harry Potter’s sorting hat, books catering to teens were obsessed with elaborate rituals used to divide and classify people. These sorts of divisions signify the foreboding transition from childhood to adulthood, and the entry into capitalist society: Into a world where we are judged by our profession and our income status, and held victim by the inequalities of gender, race and class. It expresses the constant anxiety on adolescents' (and their parents) minds that their paths are laid out for them -- that what elementary schools they go to, what courses they pick, what groups they associate with, what colleges and majors they choose -- will forever define their place in society.

By the the same token, it makes explicit the hierarchy of high school, the "sorting" that feels so concrete and imposed on adolescents — much like “Mean Girls” maps high school’s social geography by what lunch table one sits at, segmented into the nerds and jocks, the popular and unpopular. As Slate’s Dana Stevens writes, "The social, interpersonal, and biological phenomena that define teenage life—competition and jealousy, anxiety about exclusion and belonging, shifting alliances, first crushes, wet dreams—are codified and, in some way, dignified by their transmutation into fiction." The protagonist becomes the hero by following her/his inner desires instead of deferring to outside pressure, defying the categories set out for him/her.

Most significantly, this plot device appeals to our lifelong human urge to categorize people and to classify ourselves: The society-wide version of the Buzzfeed quiz, the reason we still proudly profess our allegiance to Gryffindor or Ravenclaw almost three decades after Harry got sorted.

Here’s a look at some of the ways young adult fiction has exploited this trope throughout the years:

"Divergent," Veronica Roth:
At age sixteen, individuals are divided into groups based on their personalities and abilities. If you get an inconclusive result on your aptitude test -- like our heroine, Tris -- you’re "Divergent" (which makes you an enemy of the state, naturally).

"The Wind on Fire," William Nicholson:
Kestrel and Bowman Hath live in a meritocracy, where a lifelong series of tests define one's place in the social order. Caste is designated by color, ranging from white (the highest) down through scarlet, orange, maroon and grey. Kestrel, a free-spirit, rebels against the constant examinations and the society's lack of individual freedoms, setting the events of the books in motion.

"Harry Potter," J.K. Rowling:
You guys may know this one. The students of Hogwarts are divided into four houses by personality: Ravenclaw, Gryffindor, Hufflepuff and Slytherin. Harry's Gryffindor, but he could have been Slytherin. Hey, so could we all!

"The Hunger Games," Suzanne Collins:
In the popular trilogy, Panem is split into a Capitol and twelve poorer districts, which are defined based on wealth and industry. At the same time, as a way of keeping the districts in check, children from each are subject to an annual sorting ritual wherein one from each district is competed to fight to the death in the annual Hunger Games. Our heroine, Katniss Everdeen, fails to play along with the rules of the Hunger Games, overturning Panem's oppressive social structure in turn.

"The Seventh Tower," Garth Nix:
In Garth Nix's popular fantasy series, society is divided into chosen and underfolk. The chosen are then labeled by colors which show their ranking in society — from the highest, Violet, to the lowest, Red. Individuals can be promoted and demoted throughout.

"Graceling," Kristin Cashore:
People are born with extreme skills — their “Grace” — which defines their place in society. Our heroine, Katsa, is graced with the gift of killing, which forces her out of the life she knows.

"Legend," Marie Lu:
The republic is divided into a strict class system, and a mandatory government exam called “the Trial” takes place at age ten, which goes on to decide your place in society. The book centers on two teenagers: June, a society-prodigy, and Day, a wanted criminal.

"Uglies," Scott Westerfeld:
Here’s a weird one; in this dystopian 2005 series by Scott Westerfeld, the society is divided into uglies, pretties, middle pretties and crumblies. At age sixteen, everyone receives plastic surgery that makes them “pretty" (unless they rebel against the established order, which is a pretty foregone plot conclusion at this point).

"The City of Ember," Jeanne DuPrau:
In the post-apocalyptic sci-fi series, adolescents have their lifelong jobs designated at a graduation ceremony.

"The Selection,"  Kiera Cass:
Cass' book centers on "The Selection," a sort of reality show that takes place at adolescence and allows girls an opportunity to escape from the society's strict caste system and compete for the hand of a Prince. America Singer is pressured to enter the competition by her mother and sister, even although she is already in love (with a non-Prince, oops).

"The Giver," Lois Lowry:
In Lowry's classic novel about a Utopian society without war and suffering, but also without choice, adolescents are given their assignment in the community at an event called "the Ceremony of Twelve." Our hero, Jonas, receives from the titular "Giver" the vaunted title of "Receiver of Memory," through which he learns about the society's past and realizes that the present day isn't as utopian as it seems. Twenty years later, Taylor Swift will cameo in a film about it, ushering in a Utopia for us all.