At turns bombastic and vulnerable, Lamar tackles race, depression and economics in his blistering new album 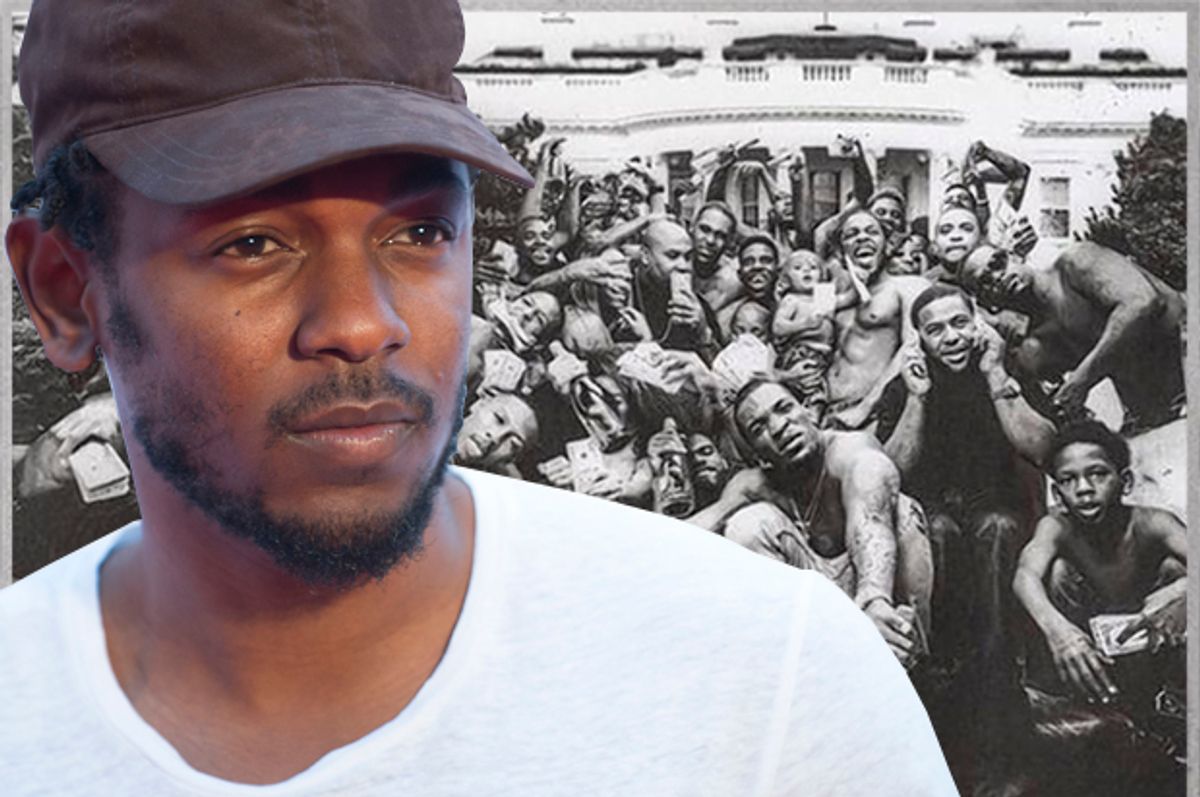 Black culture is the white world’s pimping playground—Iggy Azalea and co. playing appropriation, flaunting dollar signs and spitting phony reparations in tone-deaf ebonics. We sit there laughing, 'til we realize it’s all really sad. In his new album "To Pimp a Butterfly," Kendrick Lamar hints at Harper Lee's historically significant tale of racial injustice "To Kill a Mockingbird,” but his album is not concerned with white saviors. He uses piece storytelling to tackle issues such as depression, racism, colorism and economic inequality — all topics he and Tupac would have discussed if they could have conversed face-to-face. But while Lamar rattles off radical lyricism strung together with jazz, rap, spoken word and soul, he’s not catering to white comforters. He's black and unapologetic about it.

"To Pimp a Butterfly" (which he released Tuesday, a week ahead of schedule) is Lamar's follow-up to his 2012 "Good Kid Maad City," which touched on the mental and emotional impact of living in the 'hood as an African American youth. K.Dot’s tell-it-like-it-is blackness sets the stakes high for the rebirth of a renaissance movement: a paradigm shift back to raw black creativity. That's truth that can’t be taken and pimped — if we’re woke, that is.

It starts with the album's cover. The art addresses the masquerading of black culture, and what happens when the tables are turned — when black power is understood and not objectified. The black-and-white cover features a gathering of black men on the White House lawn, basking in schadenfreude while crushing a gavel-swinging judge. When Kendrick first released the album cover a little over a week ago he captioned it on Facebook: “Don't all dogs go to heaven? Don't Gangsta's boogie? Do owl shit stank? Lions, Tigers & Bears. But TO PIMP A BUTTERFLY. Its the American dream nigga....- lil Homie.”

Lamar brings that indictment of our political system into his lyrics, too. In "Hood Politics," he makes a mockery of Washington politicians by tagging them with the names of L.A. gangs ("DemoCrips and ReBloodlicans") who pimp out black people, calling them thugs, while handing over guns and drugs — the harsh but true reality we face.

The brand new version of Kanye might be rocking a mask and mounting his success on white trophies, but K. Dot isn’t — white acknowledgement doesn't hold much weight in his art. Lamar, who is 27, entered onto the scene in 2011 and is acutely aware of the game. He would rather be completely real, mindful of dangerous double-consciousness and bringing to bear the weight of being black.

In "Mortal Man," the last track of the album, Lamar explains the album's title: "The butterfly represents the talent, the thoughtfulness, and the beauty in the caterpillar. / But having a harsh outlook on life / the caterpillar sees that the butterfly as weak / and figures out a way to pimp it for its own benefits."

There are far too many black artists who've been pimped. Lamar cites actor Wesley Snipes on the album's opening track, "Wesley's Theory." Snipes, who was convicted for income tax evasion, serves as an example of the exploitation and then criminalization of the African American artist. Lamar further explores the historical exploitation of black men in "King Kunta," referencing the slave glorified in Alex Haley's popular 1970’s "Roots" book and television series: "Now I run the game / Got the whole world talkin' / King Kunta / Everybody wanna cut the legs off him," Lamar raps.

His bravado continues on as he unabashedly rattles off and destroys black stereotypes. In "Blacker the Berry," he hits us with: “My hair is nappy/ My dick is big/ My nose is round and wide/ You hate me, don’t you?/ You hate my people/ Your plan is to terminate my culture/ I want you to recognize I’m a proud monkey.”

Lamar's messaging may have kept Jean Michel Basquiat uncaged, unpimped, without allegiance to a heroin addiction and alive past 27. Basquiat was a black wonder child in a white art world. He vied for the opportunity to share his art, but he was caged by his black identity, mentally mind-fucked into playing white, while being black. He was that black weird kid no one knew how to box — so instead they took him on as a fixer-upper project. He got pimped, took it as praise and then doused the madness with drugs — what he thought was his way out. “Since I was seventeen, I thought I might be a star. I'd think about all my heroes, Charlie Parker, Jimi Hendrix .... I had a romantic feeling about how these people became famous,” said Basquiat. This is the butterfly complex.

However, underneath the album’s bombastic lyricism lies the emotionally vulnerable Kendrick—the young black artist, anxious and questioning, with a fixation on that butterfly effect. On "Mortal Man," he grapples with migrating from the ghetto, only to be reenslaved by discrimination. He internalizes this sense of guilt that his helplessness is his fault — rehearsing it. On the track "U," he wrestles with himself. During the first half of the song, there’s a voice that tells him he’s worthless, and if he was gone he wouldn’t be missed. He then opens up about his mother, claiming that she abandoned him for being who he is. He doesn't hold back from sharing his emotional instability, his drinking, the brokenness of his head. He also looks at the economic realities of his own situation and how they contribute to his depression on "How Much a Dollar Cost." He considers suicide as the solution. But he doesn’t follow through with it, indicting the system for making him feel worthless instead in "Hood Politics."

In the end he realizes that things are going to be “alright,” and he starts looking for ways to fix his situation. He finally concludes that the only way to be truly happy is to find it within himself in the celebratory track "I." Because Lamar worked his way through these mental cataclysms, he is free. He encourages us to stay woke, and we can't claim what's ours unless we do. While deranged, we think they love us; while we perform, they love us. That's the butterfly. It’s more than the modern-day white gentrifying hipster’s self-actualized understanding of black cool—a beat, swag and working list of black movies — it’s the forced black performance for white amusement, serving no purpose but their pleasure. Those are pimping games we can no longer partake in.