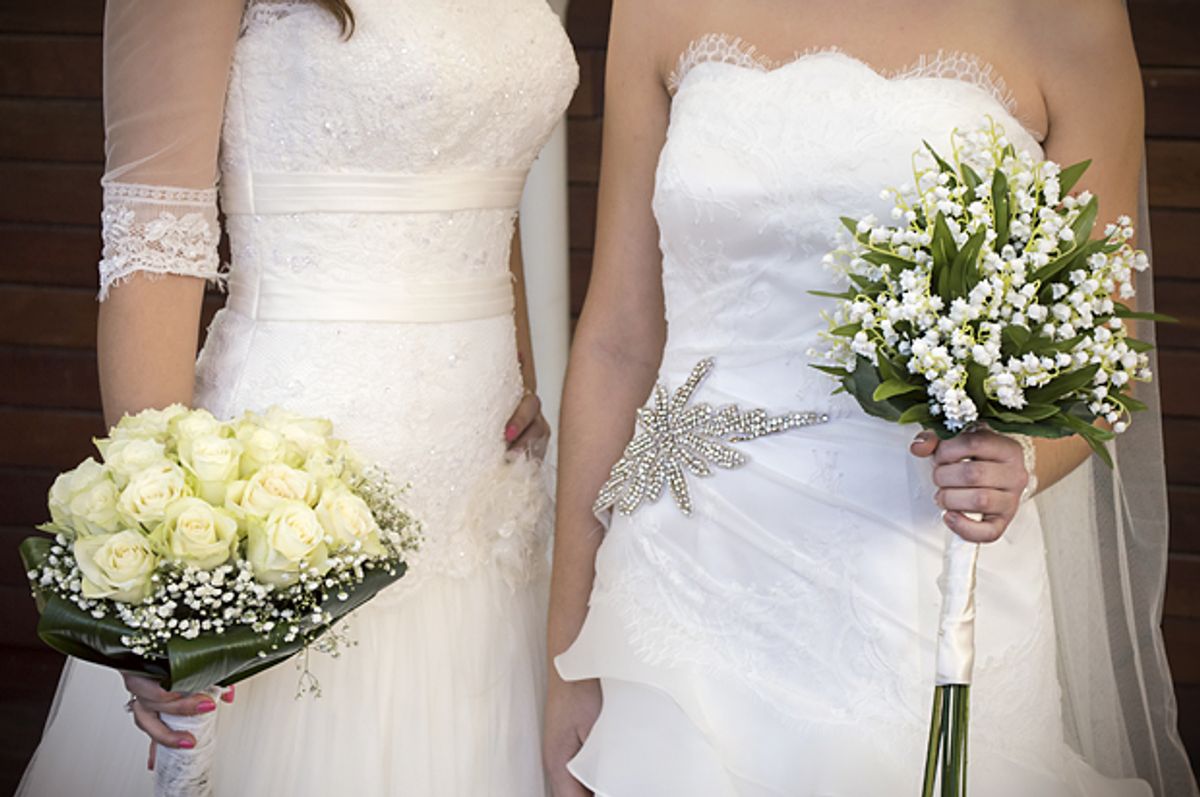 Dear Heather Barwick, I saw your letter to the "gay community" this week in The Federalist. I want to thank you for sharing your experience, and for your honesty. And I want to tell you why you're wrong.

You describe yourself as "a former gay-marriage advocate turned children's rights activist" as well as "a wife and mother of four rambunctious kids," a woman raised by your biological mother and your mother's female partner. And you say that your experience, both in childhood and now as a parent yourself, has made you realize the sanctity of "traditional" family.

Your parents split up when you were very young and your mother realized she was gay. You admit, "My dad wasn’t a great guy, and after she left him he didn’t bother coming around anymore," while your mom's partner "treated me as if I was her own daughter." You describe your upbringing as a real-life "Heather Has Two Mommies," with a "tight-knit community of gay and lesbian friends." But now, you say, "I don’t support gay marriage. It’s not because you’re gay. I love you, so much. It’s because of the nature of the same-sex relationship itself." As you say, it's because "Now, as I watch my children loving and being loved by their father each day, that I can see the beauty and wisdom in traditional marriage and parenting."

Heather, I know what you mean when you say that "My father’s absence created a huge hole in me, and I ached every day for a dad." You and I have a lot in common. My father left while my mother was pregnant with me. Unlike many other young, low-income women without a lot of financial or social support, my mother was fortunate to have a family to help out. I was raised by my mom, my widowed grandmother, and my grandmother's sister. Heather, I had three mommies. My own children, like yours, now have a loving, attentive father who fills a role in their lives that I never could. And I know, as you do, what it's like to carry around that wish for a father's love, and to feel that grief for something that never was. But I understand that I'm not sorry I didn't have a father; I'm sorry I didn't have a good father. Heather, we feel our pain because our dads left us. We feel it because our fathers were, as you say, not great guys. Yet you and I were lucky – we were extremely privileged – because we still grew up in relatively stable homes in spite of unique obstacles, ones that the families you're speaking out against do not have.

Heather, you acknowledge that "We know there are so many different ways that the family unit can break down and cause kids to suffer: divorce, abandonment, infidelity, abuse, death, etc." But you insist, "By and large, the best and most successful family structure is one in which kids are being raised by both their mother and father." I don't understand how someone whose own experience doesn't bear this out could think that. I don't understand how someone who knows firsthand that mother plus father does not equal happy home could champion "traditional marriage and parenting." And by the way, you should also know that the "gay community" you're addressing is, just like the straight one, full of diverse individuals and opinions. Want proof? Look at the ruckus over gay designers Dolce & Gabbana's recent assertion that "The only family is the traditional one. No chemical offsprings and rented uterus: life has a natural flow, there are things that should not be changed."

Heather, I'm sure that when you were growing up, your family situation was unique and perhaps confusing to some people. Maybe you had to deal with people who were unkind to your parents and you, and you're relieved your own children don't have to face that. I don't know how your "children's rights" activism currently manifests itself. Fortunately, we've come a long way. The groundbreaking original 1989 "Heather Has Two Mommies" has even recently been reissued with new illustrations that puts wedding rings on Mama Kate and Mama Jane's fingers. We are living in a moment in which more people than ever have the opportunity to marry and to start families based on their love for each other and their desire to raise children, and that is a healthy and hopeful sign of progress for everybody. As the American Academy of Pediatrics itself says, "There is no cause-and-effect relationship between parents’ sexual orientation and children’s well-being." And I only wish that your upbringing had taught you what it taught me – that what makes a family is who loves you, and that straight people do not have any inherently better aptitude for this parenting thing than anybody else.