A racial "Big Brother" debacle: Why is the government spying on Black Lives Matter protests? 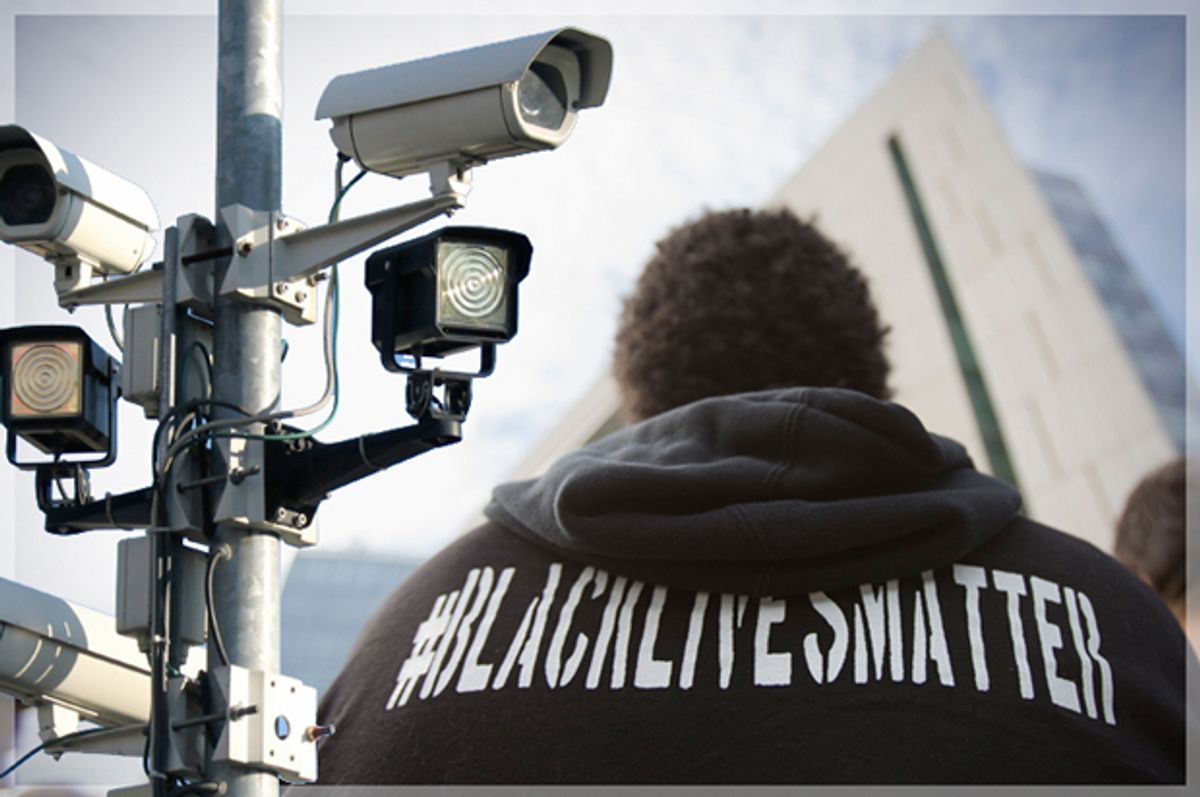 It's comforting that we have the assurance of everyone from the president on down that the government has no interest in intruding on the lives of fellow Americans without cause as they did back in the bad old days. After all, in these days of hyper awareness over the terrorist threat, it doesn't take much imagination to see how that sort of thing could get out of hand, so it's important that they follow the rules. Now there was a time when the cause of anti-communism required that we be extra-vigilant because the Russians were coming and dissent was closely monitored by police and the FBI in order that the government keep tabs on all those potential commie infiltrators such as Martin Luther King and John Lennon.

And even quite recently, it was found that the authorities had peace activists under surveillance in the wake of 9/11. The Washington Post reported in 2006:

A database managed by a secretive Pentagon intelligence agency called Counterintelligence Field Activity, or CIFA, was found last month to contain reports on at least four dozen antiwar meetings or protests, many of them on college campuses. Ten peace activists who handed out peanut butter and jelly sandwiches outside Halliburton's headquarters in Houston in June 2004 were reported as a national security threat. So were people who assembled at a Quaker meeting house in Lake Worth, Fla., or protested military recruiters at sites such as New York University, the State University of New York and campuses of the University of California at Berkeley and at Santa Cruz.

The protesters were written up under a Pentagon program called Talon, which is supposed to collect raw data on threats to defense facilities in the United States. CIFA, an agency created just under four years ago that now includes nine directorates and more than 1,000 employees, is charged with working to prevent terrorist attacks.

The logic that peace activists must be in league with terrorists has never been adequately explained, but it follows along the same line of thought which leads conservatives to assume that decadent left-wing hippies are natural allies of Muslim fundamentalists. The great sage of late 20th Century conservative philosophy, Ann Coulter, said it best:

We need to execute people like John Walker [Lindh] in order to physically intimidate liberals, by making them realize that they can be killed, too. Otherwise, they will turn out to be outright traitors.

The Pentagon ended the appropriately dystopian sounding program Talon, although it's hard to know exactly what any of the agencies charged with keeping the terrorist threat at bay are really doing because they are secret. Edward Snowden's revelations only involved the most sophisticated of high tech government surveillance activities.  It was shocking because of the sweeping nature of the programs and the fact that the NSA said outright that the mission was to "collect it all."

But perhaps the more prosaic forms of domestic surveillance activity should concern us as well. For instance, Lee Fang reported this story at The Intercept:

Members of an FBI Joint Terrorism Task Force tracked the time and location of a Black Lives Matter protest last December at the Mall of America in Bloomington, Minnesota, email obtained by The Intercept shows.

The email from David S. Langfellow, a St. Paul police officer and member of an FBI Joint Terrorism Task Force, informs a fellow task force member from the Bloomington police that “CHS just confirmed the MOA protest I was taking to you about today, for the 20th of DEC @ 1400 hours.” CHS is a law enforcement acronym for “confidential human source.”

It should be noted that this so-called threat happened months before the al-Shabab video vaguely implying a threat to the Mall was released in late February. In this earlier incident, a confidential informant told the police that someone was preparing to vandalize the mall as part of the Black Lives Matter protest. An FBI spokesman told The Intercept they have absolutely no interest in that campaign and that they make certain not to interfere with people exercising their rights under the First Amendment. They also noted that vandalism is not a "crime" that the Joint Terrorism Task Force is authorized to track and had no idea why it would have been informed of this information. Unfortunately, considering the federal government's history of illegally spying on Americans for any number of reasons, the burden to explain such activity belongs to them.

One thing to keep in mind is that there is no prohibition against using information of other potential crimes gleaned during terrorism related investigations to pursue non-terrorism investigations. So perhaps it's also useful to recall this exposé from a while back in which it was revealed that the DEA routinely lies about where it got information:

A secretive U.S. Drug Enforcement Administration unit is funneling information from intelligence intercepts, wiretaps, informants and a massive database of telephone records to authorities across the nation to help them launch criminal investigations of Americans.

Although these cases rarely involve national security issues, documents reviewed by Reuters show that law enforcement agents have been directed to conceal how such investigations truly begin - not only from defense lawyers but also sometimes from prosecutors and judges.

One of the ways they do that is by "re-creating" the investigative trail to hide how they got the information. This is routinely done to protect confidential sources from being revealed in open court but the government has evidently decided that its secret surveillance activities now qualify for that designation as well.

There is no evidence that anything like this happened in this Black Lives Matter surveillance, but those stories illustrate just how incestuous all these police agencies are. It's not difficult to see how easy it is that members of the joint terrorist task force, whether local or federal or both, might be doing what these agencies have always done -- monitor the peaceful activities of American citizens protesting their government under the guise of keeping us safe from foreign threats. Whether their information comes from secret wiretaps or secret informants it's wrong.

All that is part of an old story in American life and one which requires that civil libertarians be constantly vigilant in keeping an eye on them and pushing back wherever possible. But Fang reports that we have gone to a new level of Big Brotherism with the Mall of America:

As reported by the Star Tribune, emails released earlier this week reveal apparent coordination between Sandra Johnson, the Bloomington city attorney, and Kathleen Allen, the Mall of America’s corporate counsel. “It’s the prosecution’s job to be the enforcer and MOA needs to continue to put on a positive, safe face,” Johnson wrote to Allen two days after the protest, encouraging the mall company to wait for a criminal charge from the city before pursuing its own lawsuit. “Agree — we would defer any civil action depending on how the criminal charges play out,” Allen wrote back.

This means that the city was working hand in hand with a private corporation, using the criminal justice system as "the enforcer" to help the corporation collect  money in a civil action. Evidently they felt it would look better in civil court if the protesters who were being asked to pay the costs of policing the mall during the protest had been charged. 11 of them were hit with misdemeanors, none of them having to do with property damage or theft.

But that's not the most chilling part. In a follow-up article, Fang revealed something even more insidious:

Documents obtained by The Intercept indicate that security staff at the Mall of America in Bloomington, Minnesota used a fake Facebook account to monitor local Black Lives Matter organizers, befriend them, and obtain their personal information and photographs without their knowledge.

Evidence of the fake Facebook account was found in a cache of files provided by the Mall of America to Bloomington officials after a large Black Lives Matter event at the mall on December 20 protesting police brutality. The files included briefs on individual organizers, with screenshots that suggest that much of the information was captured using a Facebook account for a person named “Nikki Larson.”

Metadata from some of the documents lists the software that created them as belonging to “Sam Root” at the “Mall of America.” A Facebook account for a Sam Root lists his profession as “Intelligence Analyst at Mall of America.”

The Mall of America corporation had been privately collecting dossiers on protesters of many kinds for months. In fact, one of the Facebook accounts used to stalk them online was created all the way back in 2009.

The Mall is quite proud of its "counter-terrorism" unit called Risk Assessment and Mitigation, or RAM which is known for its aggressive behavior toward patrons, especially those who look as though they just might be terrorists (whatever those patrons look like.) For some strange reason, they seem to have thought the Black Lives Matter campaign was worthy of similar attention.

So what we have here are the the national Joint Terrorism Task Force, the local police, the City Attorney and some clandestine corporate "intelligence" operation for the Mall of America all involved in the monitoring of the Black Lives Matter campaign which is not a matter of terrorism, national security or criminal behavior. The only known "threat" has to do with an unknown confidential informant who allegedly told police (who then informed the FBI) the protesters planned to vandalize the mall.

We know that much of our national security surveillance work has been outsourced to private companies. But that's Eisenhower's military industrial complex doing what it's been doing for 50 years. Perhaps the domestic police agencies have come up with a more modern "public/private partnership" where the private corporation does the dirty work of stalking peaceful protesters and then "confidentially informs" the police agencies who, as part of a "Joint Task Force" will keep the federal agencies in the loop. After all, it would be an infringement of the corporation's individual freedom to suggest they don't have a right to spy on anyone they choose, especially citizens protesting the police? They're just trying to keep a "positive, safe face" on the USA's single greatest achievement, the shopping mall. What could be more patriotic than that?