"College is a terrifying experience if you are male" 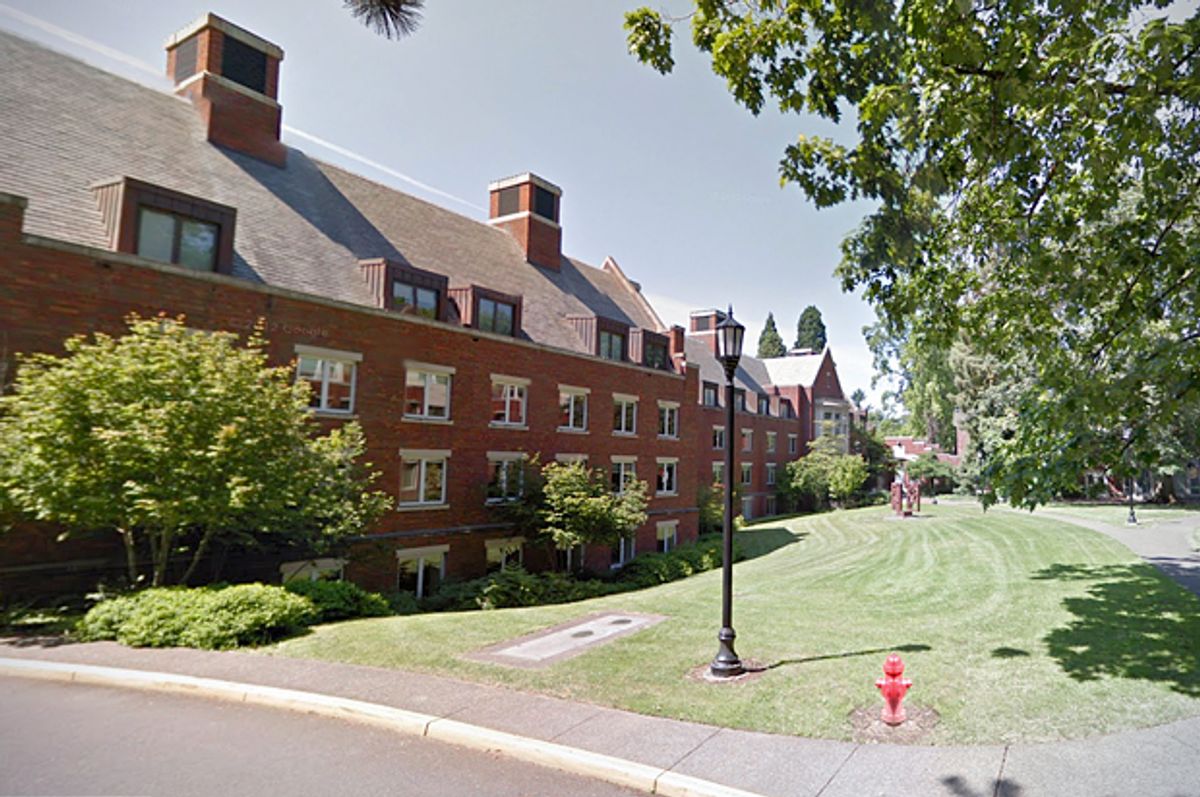 A Thursday feature in Buzzfeed News tells the tale of young Mr. True, a 19 year-old Reed College student who says he was recently banned from the "conference" portion of a Humanities 110 lecture-seminar class for his dissenting views on the oft-cited statistic that one in five college women experience sexual assault, and his disagreement over the concept of rape culture. He says that on March 14 his professor, Pancho Savery sent him an email informing him he would no longer be welcome to participate in the discussion. "Please know that this was a difficult decision for me to make and one that I have never made before," it says. "Nevertheless, in light of the serious stress you have caused your classmates, I feel that I have no other choice." The professor goes on to explain True could still get credit for the course if he completed the rest of the work, and that he can discuss the readings with him one on one.

True has now penned an open letter to the faculty in which he says that his problems have arisen because "I have an opinion of my own and I speak in class." And in a speech from last fall, he declares, "I believe in this generation. I want to change this country; I want to change this world. But we cannot do that if we are paralyzed by fear, we cannot do that if are paralyzed by these beliefs that the world has to cater to us."

Reed already has an uncomfortable track record when it comes to sexual assault. Five years ago, an investigation published in The Oregonian revealed that "three students who reported rape to the college were discouraged from calling police, instead routed to the Judicial Board." The school has been grappling with its image – and its efforts to revise its policies for handling sexual assault complaints – ever since. Last year the school had the third highest number of reported sexual assaults in the nation, though as a Title IX attorney notes, "You see schools with higher rates who are doing a better job of dealing with sexual assault numbers on campus. It's a bigger red flag to me if I see remarkably low numbers of sexual assault."

The precise content of True's contentious remarks is unclear. He says the actions of the school are an "infringement upon my academic freedom," and furthermore, that "We do not serve actual rape victims by over inflating the numbers on rape…. I did not threaten to sexually assault anyone in the conference. I presented a statistic I had found to be false and was heavily criticized and shut down immediately." But in his email, Savery says, "There are several survivors of sexual assault in our conference, and you have made them extremely uncomfortable with what they see as not only your undermining incidents of rape, but of also placing too much emphasis on men being unfairly charged with rape. They, and others, do not feel comfortable being in the same classroom with you; not only because of this topic but because of other things you have said to people personally or on Facebook in which you seem to undermine women's abilities in general. The entire conference without exception, men as well as women, feel that your presence makes them uncomfortable enough that they would rather not be there if you are there, and they have said that things you have said in our conference have made them so upset that they have difficulty concentrating in other classes."

I would be willing to wager that the problem here isn't so much True's opinions as his approach. I'll just let his words speak for themselves a bit here. "I am getting increasingly concerned that I have performed rather outstanding academic research and no one is acknowledging my research, nor telling me I'm right," he writes in his eight-page letter to the faculty. "Instead, I'm accused of sexism." And he adds, "To Pancho's point about my Facebook presence, I have been notably lacking in the normal amount of idiocy that occurs on the Reed page." True has also started a petition in which he invokes the First Amendment, the Oregon free expression provision, McCarthyism, and the Letter from a Birmingham Jail. "I do not want to be a martyr," True says, "but I will do that if that is what is necessary to make a statement." And as he explains to Buzzfeed, "I just want to bring attention to the fact that this happens on colleges. Right now, going to college is a terrifying experience if you are male."

But as Buzzfeed points out, "Private colleges aren’t bound by the First Amendment." And loosely defined freedom of speech is not an all access pass. Yet that concept – that the First Amendment is a universal golden ticket – is pervasive. Just this week, there's no shortage, for example, of staunch defenders of designers Dolce and Gabbana's controversial comments on IVF who cite the First Amendment, seemingly forgetting that the men are Italian.

If you want to challenge the undeniably less than rock solid "one in five" statistic, you've got a fine case, and I'll defend your right to make it. Further, if you want to say things on Facebook, it shouldn't influence your participation in a specific class. And I absolutely don't believe colleges should become so overly concerned about potentially difficult subjects and ideas they are afraid to approach them. But is this truly a case of a male with an unpopular opinion being shut down because of his beliefs? Or is it about a possibly disruptive student creating an environment that was not productive for the rest of the class? True says that "Reed teaches you to critically examine everything you hear and everything you read, and not take anybody's word." And as his story continues to unfold, one thing that's certain is that his directive will apply to his own account of events as well.