Cut their paychecks and take away their healthcare! The GOP's insane plan to woo women in 2016 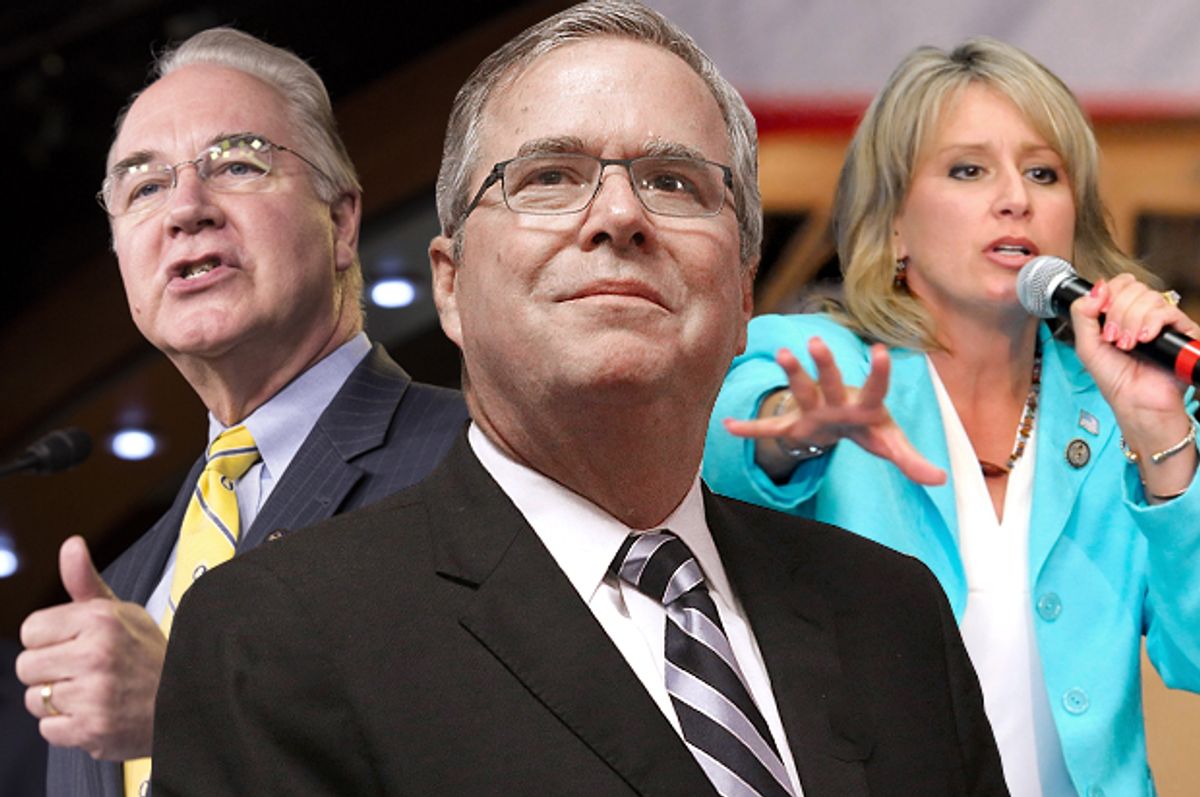 Remember earlier this year when a coalition of Republican women led a “revolt” against a 20-week abortion ban because it would have denied rape victims access to the procedure unless they reported the assault to authorities?

“We got into trouble last year, and I think we need to be careful again,” explained North Carolina Rep. Renee Ellmers, one of the architects of the so-called rebellion and a supporter of an identical version of the measure -- narrow rape exception and all -- in 2013. “We need to be smart about how we’re moving forward,” she continued, making it clear that the move against the bill was about optics, not substance.

At the time, this supposed Republican awakening spawned approximately 1 million pieces about the possible new face of the party, lawmakers who were not just savvier about bad press and dodging the “war on women” label but also more concerned with women’s lives in general.

That was January. Welcome to March.

It’s tempting to laugh at the absurdity of it all, but these policies actually cause tremendous suffering and -- in the case of a possible repeal of the Affordable Care Act and any reduction in funds for programs that serve victims of intimate partner violence -- literal death for women.

On Tuesday, House Republicans unveiled their budget proposal for 2016. Among the many draconian cuts in the plan, it includes a repeal of the new healthcare law (to be replaced by an unnamed and undeveloped policy because why bother to figure that sort of thing out in advance). While it’s been well established that people would die and the country would fall into chaos if the Affordable Care Act gets killed (whether by a Supreme Court ruling or a GOP budget), women would face uniquely devastating consequences. People would lose the maternity coverage that is currently provided at no additional cost, access to contraception and screenings for intimate partner violence would no longer be guaranteed in most plans and being a victim of domestic violence could return being a preexisting condition.

The plan is clear about repealing the Affordable Care Act and massive restructuring of Medicaid and Medicare (both major hits to women), but it also contains $1 trillion in unspecified cuts to domestic programs, which, as we’ve seen in years past, means food assistance, housing assistance, Head Start and funding for domestic violence and anti-sexual violence programs.

Now, in this possible future landscape in which women have even less access to healthcare, things like affordable childcare and outrageous luxuries like food, one has to wonder how they will actually get the vital services they've lost. Certainly not through fair wages or a boost to the minimum wage, because those are on the GOP's chopping block, too.

Two-thirds of minimum wage workers are women, so consider them the primary targets of Jeb Bush’s recent remarks on eliminating the federal minimum wage. A spokesperson in damage control mode tried to argue that Bush was simply arguing in favor of freezing the minimum wage at $7.25 and leaving the rest to the states, but that changes very little -- actually, virtually nothing -- in terms of helping working women get out of poverty.

“And who supports the seniority system? Unions. Government bureaucracies,” she continued. “The constituencies that the Democrats like to protect.” According to the GOP’s version of events, organized labor movements of the sort that just successfully pressured retail giants like Wal-Mart to bump their minimum wages are actually the problem.

It is bizarro world out there, and it only promises to get more bizarro as we move closer to 2016. The GOP will be in the unenviable position of pretending that decimating women's paychecks and taking away their healthcare is the real way to improve their lives. (Because being broke and sick without access to a doctor always turns out so well.) Some in the party may have had a moment of political savvy back in January, but that moment is gone. There's no disguising the GOP's blatant assault on women's lives and basic livelihoods, and what's ahead looks bleaker than ever.