"Glee": Drained of joy but determined to hang on, the unlikely hit that made "Empire" possible belts its final tune

"Glee" never recovered from Cory Monteith's death, but shows like "Nashville" are thriving thanks to its success 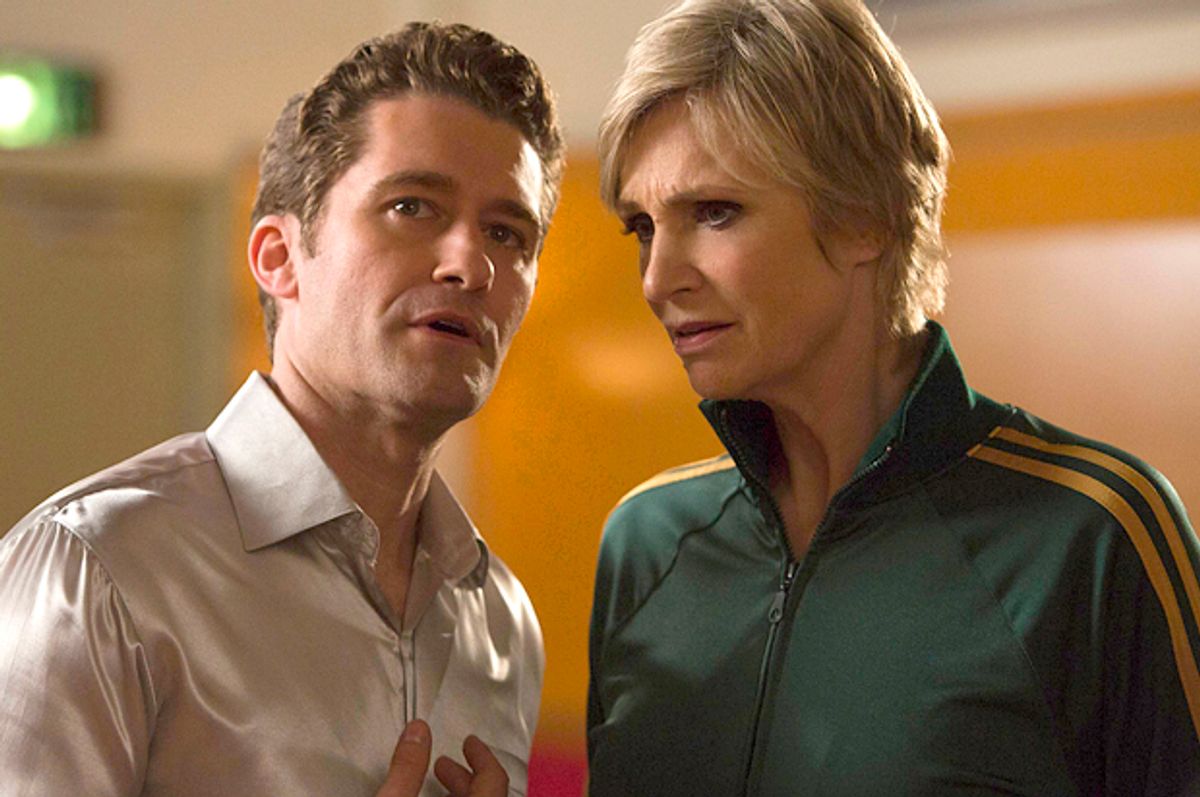 Glee wasn’t supposed to be a hit when it debuted in May 2009. There wasn’t a prestigious movie star headlining the cast (rather, unknowns and Broadway actors), no hip location (instead, the purposely unglamorous Midwest setting) and it was short on the guilty pleasure indulgence that teen shows like "Dawson’s Creek" and "Gossip Girl" offered. Before the first episode had aired, show creators Ryan Murphy, Brad Falchuk and Ian Brennan were convinced it would be a short order. The show went on to huge success, of course, and it concludes its sixth and final season with a two-hour series finale Friday evening.

In its first few airings, "Glee" picked up some surprising buzz, the elusive combination of critical appeal and audience chatter that has gone on to propel shows like "Scandal" and "Empire" to pop culture phenoms. Yes, it was a musical theater nerd’s dream (although, strictly speaking, "Glee" was never a musical, but rather a show that heavily incorporated music), and it was peppy, sharp and accessible enough for families, teens and adults. Followers proudly proclaimed themselves “Gleeks,” with heavyweights like Ellen DeGeneres and President Barack Obama pledging their allegiance to the gang at William McKinley High. (And yes, that’s the same high school name used in "Freaks and Geeks" and "The Wonder Years," reportedly popular because of easy legal clearance.)

If it seemed like a pop culture whirlwind, it was. The cast took to social media en masse, as did the audience, and instantly downloadable singles helped propel the fictional New Directions glee club to real life iTunes popularity. After the first season, the cast went on a mall tour, hitting up Hot Topics around America like a refreshed version of the "The Partridge Family" or "The Monkees." There was even some harmless off-screen drama for the tabloids: the rumor that Naya Rivera vandalized Mark Salling’s car after a lover’s spat, the real-life pairing of Finchel (Rachel and Finn, played by Lea Michele and Cory Monteith), and vague stories of on-set strife and diva behavior.

But the off-screen drama still paled in comparison to the pulpy on-screen story lines, involving fake babies, teen pregnancy, unrequited love and teenage cuckolds, with cross-generational pop music and show tunes woven throughout like an omnipotent narrator. Katrina and the Waves' "Walking on Sunshine" mashed with Beyoncé’s "Halo"? It was all uncomplicated, infectious, iPod-friendly fun — even when it wasn’t.

The fickle nature of high school and the elusive and constantly shifting line of what separates the popular from the ostracized was always what "Glee" did best. Perhaps the most complex and nuanced relationship explored was that of the bullies and the bullied, and the choir room vs. the locker room. One day you were head quarterback, the next you were getting a blue slushie thrown in your face. There was no justice in the high school halls, and being talented didn’t equal being well liked. Glee club and music offered some shelter from the (slushie) storm.

It was fun and funny, but even the most absurd moments felt the gravitas of what it means to be young and out of place in the halls. Ground zero of "Glee’s" social consciousness was its inclusive casting and character choices; on its face, it looked different than anything else on TV. Artie, the paraplegic singer, didn’t show up to impart an after-school special style lesson, only to disappear and never be heard from again. The introduction of Becky Johnson, a Cheerio with Down syndrome, didn’t stop at “she made the squad” back patting; she was a regular teenage girl with an unrequited crush, a penchant for Sue Sylvester-style zingers and, eventually, a one-way ticket to college. "Glee" didn’t just say it gets better, it showed us.

But that responsibility didn’t always make for smooth television. At times, the story lines felt disjointed, particularly the show's attempts to forge the more outlandish scenes with its socially progressive ideas and unworldly characters. The football team breaking into Beyoncé’s "Single Ladies" dance to confuse the competition? That was a feel-good moment for fans of Kurt (who was then in the closet), but also a convenient way to demonstrate his usefulness to a team that had rejected him and a father who didn’t understand him. Throughout the first few seasons, there wasn’t a problem that couldn’t be explained or solved through a rousing song. If the story line didn’t work, music filled the emotional gaps for the audience. The audience may have thought Finn dim for thinking he got his girlfriend Quinn pregnant (without having sex), but his rendition of "(You’re) Having My Baby" was undoubtedly sweet — which is sometimes enough.

Around Season 3, the show’s moment as a cultural phenomenon seemed to be waning, and the formula began to rely increasingly on bold-name cameos, including Gwyneth Paltrow and Idina Menzel. "Glee" started to feel redundant, and a little less magical – there was always a new competition, yet another life-or-death threat to the glee club, some skirmish about solos. The underdogs we needed to root for were now on top, and time somehow felt finite: graduation was just around the corner.

To "Glee’s" credit, it eschewed the tempting but unimaginative “convenient state college” story line that teen shows often fall back on. The cast underwent some tweaking; regulars like Mark Salling were demoted to recurring guest-starring roles, a few newbies were bumped to regulars, and the core cast of Jane Lynch, Matthew Morrison, Cory Monteith, Lea Michele and Chris Colfer remained (though Michele’s Rachel and Colfer’s Kurt would be living in New York). "Glee" seemed committed to making adulthood work.

During the summer hiatus between Season 4 and 5, Cory Monteith was found dead of a heroin and alcohol overdose in his Vancouver hotel room. He was 31. Monteith’s addiction issues had been bubbling up for months, and his Season 4 absences were reportedly due to a relapse and stint in rehab. Still, with his real-life girlfriend, Lea Michele, reeling from his death and a gaping hole in the cast, the future of "Glee" seemed much dimmer. There were so many facets to Monteith’s death that seemed unfair and unexplainable, and now Ryan Murphy and team were forced to deal with it in prime time.

Season 5 went ahead with a few canned episodes before airing "The Quarterback," a tribute to Monteith that took care to steer clear of any cause of death. As a stand-alone episode of television, it’s a heartbreaking look at the shock of grief. The goodbye to Cory Monteith — Lea Michele’s rendition of "Make You Feel My Love," Matthew Morrison sobbing into Finn’s letterman jacket — felt raw and tangibly sad.

Monteith’s death didn’t mark the end of the series, but it certainly was the end of the innocence and enthusiasm "Glee" brought to TV. It was also a creative blow for Murphy, who said that he had always planned the series finale to close with Rachel and Finn reuniting. In what must have been a confusing time, the team stuck to its theater roots and decided that yes, the show must go on.

There is a resiliency that should be admired, as continuing on without Monteith must have been emotionally draining for the cast and crew and difficult for the writers. The powers that be decided Season 6 would be the show's last, with one final headline-making story line: a gender reassignment for Dot-Marie Jones’ Coach Beiste. But in a post-"Transparent" and "Orange Is the New Black" television landscape, what would have been groundbreaking a few years ago was met with little excitement from audience or critics. As a third act, this final season has felt like a trot toward the finish line.

With its sluggish ratings and jumping time slots, it’s easy to write "Glee" off as over the hill, but six seasons, a 3-D film, an international tour and millions upon millions of digital downloads is not the work of a one-hit wonder. It’s hard to imagine shows like "Nashville" and "Empire" (not to mention the short-lived "Smash" and the brief eight-episode "Galavant") gaining network green-lights without the proven music formula and album sales that Murphy and his team delivered. "Glee" wasn’t always pitch-perfect — few shows are over six years — but mixing humor, high school, amateur singing, choreography with a heavy serving of social issues is no small feat.