"Insurgent" is the "KFC Famous Bowl" of film: Critics agree the "Divergent" series is the poor woman’s “Hunger Games"

Even Shailene can't save the "Divergent" trilogy's insipid second act 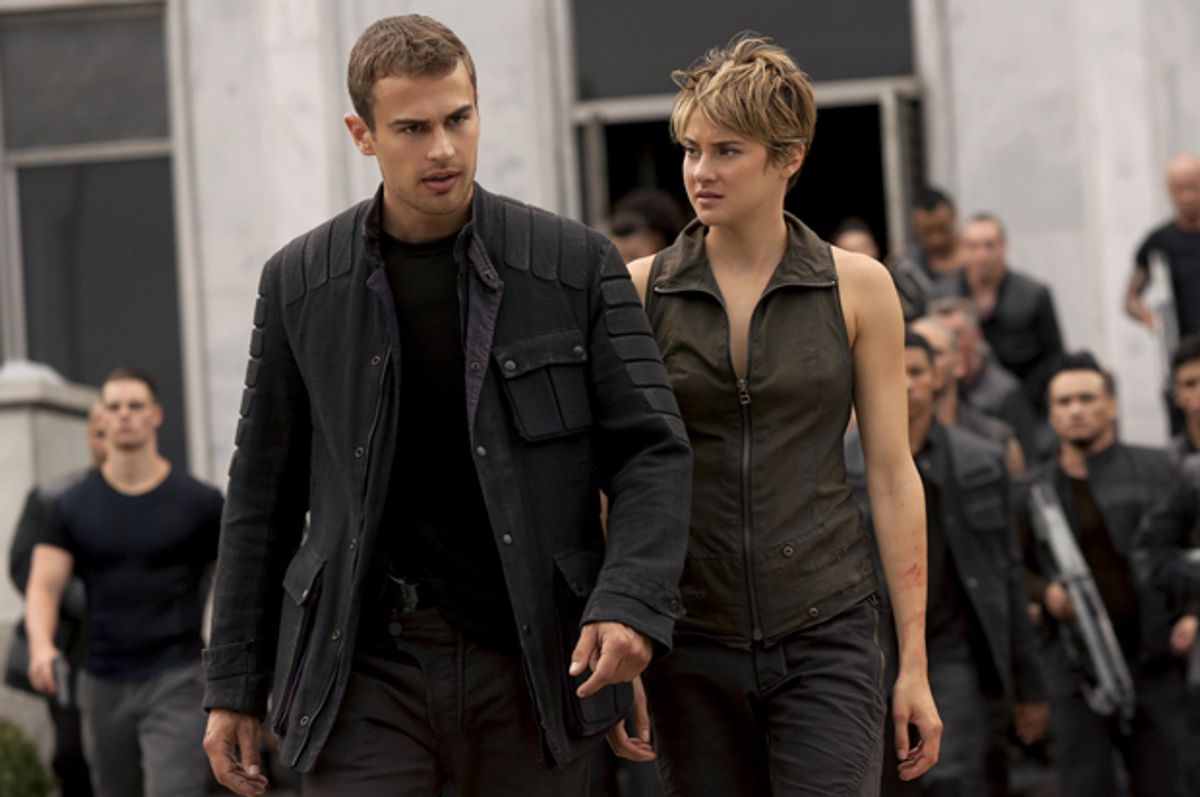 The "Divergent" series seemingly has all the ingredients for success: Much like "Hunger Games," it features a strong young woman -- played by one of our most popular and charismatic starlets -- who rebels against autocracy and fights for freedom (and love!) in a violent dystopian world. Yet much like the first "Divergent" film, the sequel “Insurgent” is getting poor reviews, with most of the critics deriding it as a convoluted mashup of played out YA tropes -- a cut-rate “Hunger Games” that even Shailene Woodley can't save. Here’s a look at what the reviews are saying:

The New York Post:
With the notable exception of the gifted Shailene Woodley — who continues to give this increasingly pointless knockoff of the “Hunger Games’’ franchise better than it deserves as its cut-rate Katniss — practically everyone you’re watching seems to be wishing they were somewhere else. So you might want to take the hint.

The AV Club:
"Just keeping a straight face, though, can’t turn a divergent into a mockingjay. Despite its overtures toward thought-provoking sci-fi, The Divergent Series, as Insurgent is prefaced in the advertisements, is actually more akin to Screen Gems franchises like Resident Evil or Underworld, only not as stylish. “Not as stylish” is more or less the calling card of director Robert Schwentke (taking over for the similarly semi-slick Neil Burger), whose camera makes the occasional swoop or track but never takes any sustained technical or narrative risks."

Slant Magazine:
It's not enough that she fall short of J-Law's benchmark as Katniss. One mid-film courtroom sequence would've needed the tears of Falconetti. Having been delivered a dose of truth serum, Tris is warned, "The harder you resist telling the truth, the more it will hurt." Tris, adrift in melancholia, can't even muster up the sting of a slap to the face, and the filmmakers can't seem to muster a reason for her to care.

The Playlist:
The sequel to “Divergent” is the cinematic equivalent of the KFC Famous Bowl: a nutritionally devoid mishmash of elements and past films that somehow manages to be less than the sum of its parts once cobbled together.

The Wrap:
"Take everything annoying about a cobbled-together, overly familiar YA adaptation, add the built-in wheel-spinning of a sequel, and you've got Insurgent, a film that works best when it places its heroine inside virtual-reality situations—at least then it has an excuse for eschewing logic and context."

New York Daily News:
“Insurgent” is a starving person’s “Hunger Games.” It may fill up the multiplex moments when Katniss is between bouts, but this absurd action-drama saga is below even its anemic debut, last year’s hit “Divergent.”

IGN:
"A film shouldn’t be dismissed for not being what a critic wanted it to be. So my dissatisfaction with Insurgent is not that it didn’t continue to inject John Hughes-ian conflicts in an increasingly John Hughes-less world. Just that teenage fragility was the only part of the film that had any sort of enjoyable logic. The leaps and bounds of technology, and the always so serendipitous arrival and dismissal of troops for both sides, is just plain bad storytelling. For example, Tris’ main adversary, the sadistic military meathead Eric (Jai Courntey) arrives in Amity with a full squad of armed divergent extractors. Yet, his whole team leaves without him while he one-on-one takes on the only 100% divergent person that they were there to extract. It makes no sense."

The Telegraph:
"Because while its lead actress is a force to be reckoned with, Insurgent is certainly no Alien – nor a Hunger Games, nor a Maze Runner. Instead, it plays like a listless mash-up of every Young Adult franchise movie you’ve ever seen – domineering rulers, anguished, system-smashing teens, and all the purposeful striding through rubble you can handle."