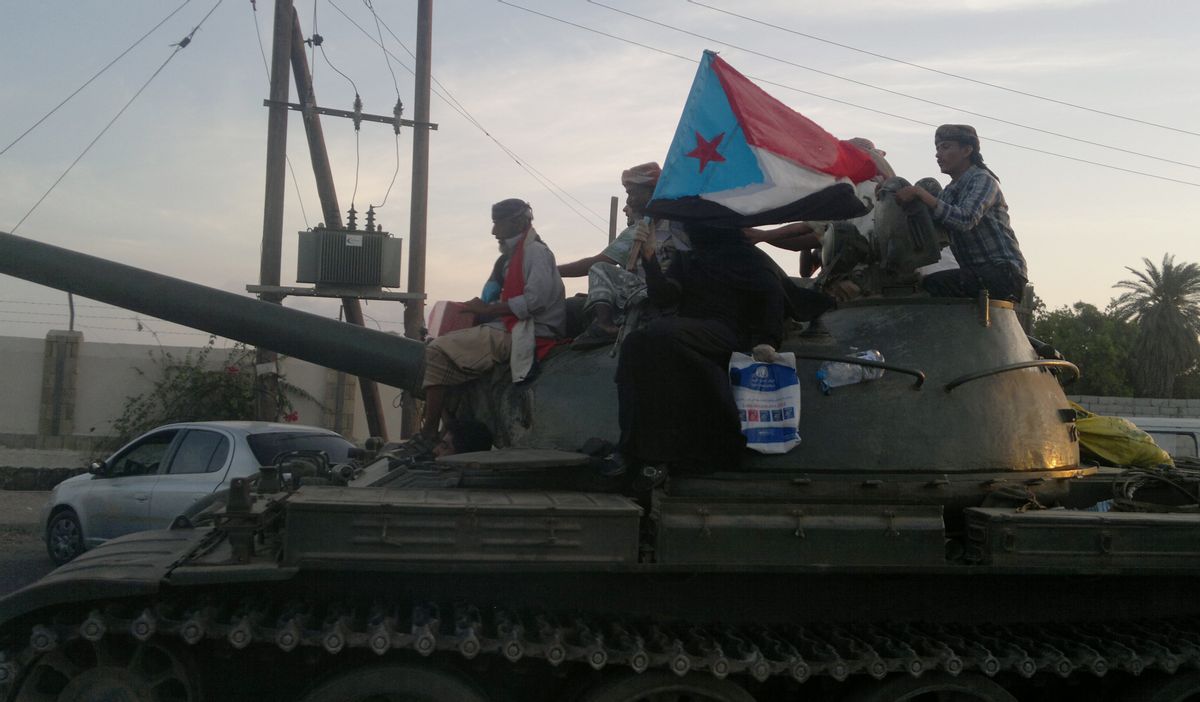 Militiamen loyal to President Abed Rabbo Mansour Hadi ride on a tank on a street in Aden, Yemen, Thursday, March 19, 2015. A woman on the tank holds a representation of the old South Yemen flag that was used when southern Yemen was an independent state until 1990. Forces loyal to Yemen's former President Ali Abdullah Saleh stormed the international airport in the southern port city of Aden on Thursday, triggering an intense, hours-long gunbattle with the forces of the current President Hadi that intensified a monthslong struggle for power threatening to fragment the nation. (AP Photo/Hamza Hendawi) (AP)
--

AP journalist Hamza Hendawi describes the tense scene as the airport in Aden, Yemen, comes under attack by forces loyal to the former president — just as Hendawi and other travelers are set to depart.

There may be no direct link, however. Analysts say the group could be trying to raise its profile by associating itself with attacks around the region.

3. WHO'S BACKTRACKING FROM CAMPAIGN VOW

In the days before Israel's election, Netanyahu took a hard line against the establishment of a Palestinian state. Now he's softening his stance.

The president orders the federal government to cut its greenhouse gas emissions by nearly half over the next decade.

6. DISTILLER MAKING IT EASY FOR DRINKERS TO COUNT CALORIES

Diageo, the global giant behind Johnnie Walker, Guinness and other alcohol brands, says it will put alcohol-content and nutrition information on the labels of its products.

7. WHY SKYWATCHERS ARE FLOCKING NORTH

A total solar eclipse will be visible Friday only in a narrow path across the northern hemisphere.

A 22-month-old Pennsylvania boy was pulled lifeless last week from an icy creek, then revived after an hour and 41 minutes of CPR. Now he's fully recovered.

The opening of March Madness is highlighted by two sons winning games for their father-coaches.