It's not unpatriotic to say the Pledge in Arabic

A controversy erupts over a school's Foreign Language Week 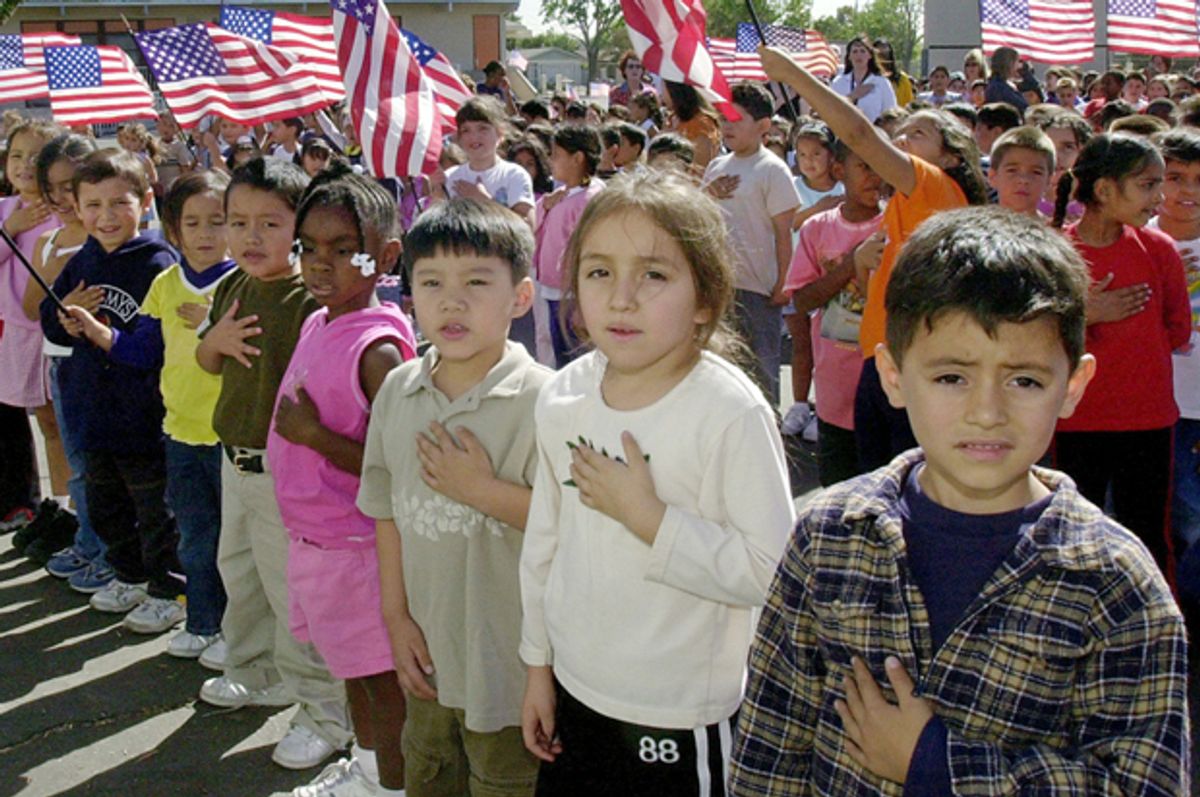 How many different ways can Americans get it hopelessly wrong about such an arbitrary tradition? When it comes to the Pledge of Allegiance, the possibilities seem limitless. The latest absurd skirmish – an upstate New York school that this week issued an apology for a student leading the Pledge in Arabic.

On Wednesday, as Pine Bush High School was celebrating National Foreign Language Week, a teacher asked student Andrew Zink, who usually leads the school in the Pledge, if another student could do it instead, in another language. "I wanted to say yes because I felt this is the right thing to do," Zink told the LA Times Thursday. But almost immediately, he says, the trouble began. "The anti-Muslim sentiment started to build," he says. "The poor girl who read it, she’s so sweet and when she finished reading it people called her a terrorist. They told her to go back to the Middle East. They mercilessly degraded her and I felt awful for her."

According to the Times Record Herald, "The announcement was greeted by catcalls and angry denunciations in classrooms throughout the school by students who felt the reading was inappropriate." The accompanying feature, by the way, includes a photograph of a student's car festooned with the message "We live in America: Speak English."

School Superintendent Joan Carbone says the incident quickly "divided the school in half," and says the school received complaints "from district residents who had lost family members in Afghanistan and from Jewish parents who were equally outraged by the reading." As The Guardian points out, "Arabic is not commonly spoken in Afghanistan, where the official languages are Pashto and Dari."

On Thursday, high school Principal Aaron Hopmayer addressed the incident in a school-wide announcement, apologizing to those who'd been offended. And in a statement, the school said, "The intention was to promote the fact that those who speak a language other than English still pledge to salute this great country. We sincerely apologize to any students, staff or community members who found this activity offensive. In our school district the Pledge of Allegiance will only be recited in English as recommended by the Commissioner of Education." But Dennis Tompkins, New York State Education Department spokesman, says, "State regulation specifies the wording of the Pledge, not the language."

As the story has spread, it has become like flypaper for nonsensical opinions. On "Fox and Friends," guest Zuhdi Jasser said this week, "We are at war…. They're reciting the pledge of allegiance. Imagine if during World War II we had decided to recite the Pledge of Allegiance in German. We are at war against radical Islam…" Closer to the source, at a Thursday public meeting held by the Pine Bush American Legion Post 1308, there was continued controversy, with Orange County legislator Mike Anagnostakis declaring to the veterans assembled that "It is disrespectful to every one of you to recite the Pledge of Allegiance or the national anthem in another language."

But at the same event, a defender of the incident said, "Patriotism is the love of country, and if you love this country it doesn’t matter what language you speak." And another community member asserted, "What was intended to go on in that school wasn't to replace the English language with Arabic for the pledge of allegiance, it was part of a one week initiative."

Andrew Zink, meanwhile, says he is now no longer permitted to lead the Pledge, and "may be impeached from his post as senior class president." And on a blog post Friday, his mother shared some of the online vitriol that has been directed toward her and her "commie" son, from, she says, "adults across the country," telling them to "just leave and join ISIS."

I feel like maybe these people don't understand the part about how this is over the Pledge of Allegiance. It's about students pledging. Loyalty. To the United States. Nobody jumped on a desk and shouted, "Death to the infidels." And I cannot believe that a school would be so cowardly, so pathetic, that it would throw its own students under the bus and issue an apology for what was clearly, to any sentient human, an expression of both patriotism and diversity. What an embarrassment. What a sad missed opportunity to the job of a school – to educate.

Michelle Zink says that her son contends that he went public with the story because he says he's "really just hoping to start a discussion about what being an American is, and what defines being an American." And he says, "It’s not our language that makes us American, it's our beliefs." If there's any good to come of all of this, then, it's that in spite of all the ugliness and ignorance, somehow, at least one student in Pine Bush seems to have learned the right lesson.