Tea Party's absurd advantage: Why America's budget talk is so messed up

Paul Ryan & co. repeatedly unveil plans from the far right fringe -- and get taken seriously each time. Here's why 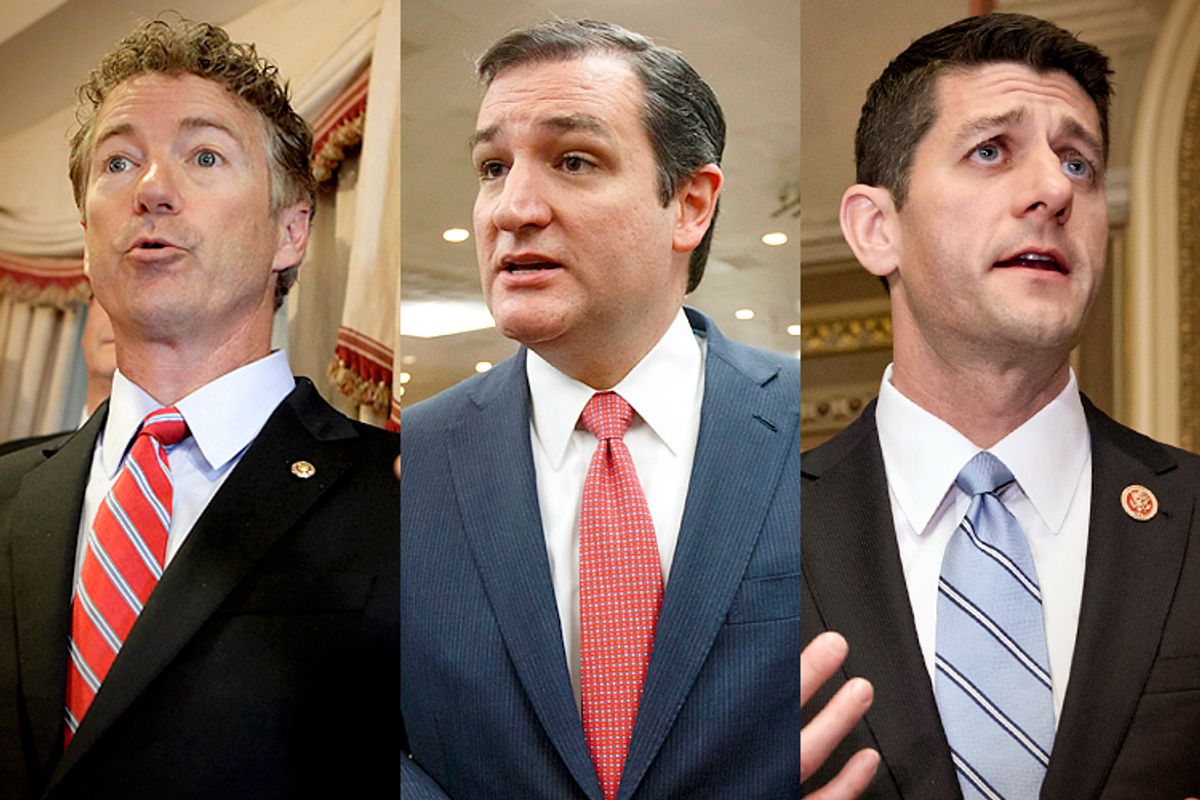 It must be springtime since all of the Village is once again excitedly poring over the Republican budget plan. As usual they are searching for reasons to praise its responsible agenda of slashing benefits for poor , old and sick people in order that we all be forced to "take our medicine" and recognize that "we are all going to have to sacrifice."  (Of course the millionaire celebrities who are saying won't feel any pain, but you can be sure they have your best interests at heart.)

In years past, the star of the show was Very Serious Person, Paul Ryan, the Republican budget savant who everyone agreed was so spectacularly serious that even though his budget numbers never added up, he was still worthy of deep respect and rapt attention just because he was so darned ... serious. This piece by William Saletan from 2012 perfectly illustrates the phenomenon:

Ryan is a real fiscal conservative. He isn’t just another Tea-Party ideologue spouting dogma about less government and the magic of free enterprise. He has actually crunched the numbers and laid out long-term budget proposals.

Look, Ryan hasn’t “crunched the numbers”; he has just scribbled some stuff down, without checking at all to see if it makes sense. He asserts that he can cut taxes without net loss of revenue by closing unspecified loopholes; he asserts that he can cut discretionary spending to levels not seen since Calvin Coolidge, without saying how; he asserts that he can convert Medicare to a voucher system, with much lower spending than now projected, without even a hint of how this is supposed to work. This is just a fantasy, not a serious policy proposal. So why does Saletan believe otherwise? Has he crunched the numbers himself? Of course not. What he’s doing – and what the whole Beltway media crowd has done – is to slot Ryan into a role someone is supposed to be playing in their political play, that of the thoughtful, serious conservative wonk. In reality, Ryan is nothing like that; he’s a hard-core conservative, with a voting record as far right as Michelle Bachman’s, who has shown no competence at all on the numbers thing.

What Ryan is good at is exploiting the willful gullibility of the Beltway media, using a soft-focus style to play into their desire to have a conservative wonk they can say nice things about. And apparently the trick still works.

Indeed it did. But it turns out that it wasn't only particular to the Very Serious Ryan, with whom they did have a Very Serious love affair. For years, no matter how tragically misguided the proposed tax cuts for the rich and benefits cuts for the poor and whatever hare-brained "reforms" he pretended to propose the commentariat acted as if the yearly Republican budget had been delivered directly from Mt Sinai. This year proves that they will greet every braindead, extremist GOP budget with similar excitement regardless of Ryan's involvement.  The 2015 Budget Committee proposal under the new chairman Tom Price, for instance, has garnered tremendous coverage even as it's acknowledged by everyone that it has as much chance of passing as a ban on flying American flags at political events.

After much hemming and hawing and jockeying between the defense hawks and the fiscal hawks with the Tea Party vultures pacing around with a ravenous look in their eyes, the House GOP budget committee finally managed to pass a document. Passing the budget in the full House and then coming together with the Senate in reconciliation is a long shot to say the least, despite the fact that they are promising to lard the reconciliation process with as many offensive proposals as they can muster. It would be entertaining if it weren't such a stale and boring story line by now. But the beltway wags can't stop themselves from writing breathless story after breathless story even as they acknowledge that the budget features draconian cuts to necessary services,  has little chance of passage and no chance of being signed by the president. The fact that the numbers never add up is barely mentioned.

Meanwhile, every year the House Progressive Caucus releases what they entitle The People's Budget, with numbers that add up, sensible deficit reduction along with protection for the most vulnerable paid for by higher taxes on the wealthiest among us. Katrina vanden Heuval described it this way in the Washington Post:

On the investment side, the CPC expands investments in areas vital to our future. It would rebuild America, modernizing our outmoded infrastructure. It would invest to lead the green industrial revolution that is already forging markets and creating jobs across the globe.

The CPC understands that we must do the basics in education. It would provide pre-K for every child, the most important single reform we can make in education. It calls for increasing investment in our public schools, helping to mitigate the destructive inequality between rich districts and poor. It would provide students with four years of debt-free college education, and pay for renegotiating existing student loans, relieving the burden now crushing an entire generation.

The CPC recognizes that more seniors are facing a retirement crisis. On budget, it would adopt an inflation measure for Social Security that reflects the rising costs seniors face in areas like health care. Off budget, the CPC calls for expanded Social Security benefits, paid for by lifting the income cap on Social Security payroll contributions. No longer would Donald Trump pay a lower rate in Social Security taxes than the police who guard his palaces.

The CPC would also expand the Earned Income Tax Credit and the Child Tax Credit, giving a break to low-wage workers and to parents struggling with the costs of childcare. And needless to say, the CPC would defend Medicare and Medicaid, not privatize it, and strengthen health-care reform, not eliminate it.

But with the exception of a few scattered liberal writers, that proposal might as well have been released underwater for all the attention it gets. If it is mentioned by the mainstream cognoscenti it's usually accompanied by eye-rolling and barely suppressed giggles as if this proposal was found on the back cover of Angela Davis's copy of Das Kapital. Meanwhile, the dead on arrival GOP slash and burn budget is discussed endlessly on every cable network.

And it's not just the People's Budget that gets short shrift. Paul Waldman wrote a post at the Plumline on Thursday in which he pointed out that there's yet another liberal economic plan in the mix:

Today, the Economic Policy Institute — a liberal think tank that gets support from labor unions — released an 11-point “Agenda to Raise America’s Pay,” and it’s worth paying attention to because something like it will probably become Hillary Clinton’s economic plan. Conservatives would probably look at it and say this is the same old thing: Increase the minimum wage, lower barriers to collective bargaining, invest in infrastructure, reform immigration, raise taxes on the wealthy and so on. (You can see a similar set of recommendations in this report from the Center for American Progress.) But the fact that many of these ideas are familiar doesn’t diminish the degree to which they’re both popular and aimed directly at income inequality. And some of the proposals, such as increasing the availability of overtime pay and sick leave, or encouraging the Fed to prioritize lowering unemployment over protecting against future inflation, haven’t been as commonly discussed among regular people sitting around kitchen tables.

It's doubtful that most Americans have discussed more than a few high profile proposals like the minimum wage at the dinner table. Why would they? The media never mentions them. Now, if Clinton wins the nomination and does adopt this agenda as her own, they will certainly get more play. But it starts at a disadvantage compared to the GOP budget plans because people have heard all these conservative proposals again and again being discussed respectfully in the media while the liberal agenda sounds like something jarring and odd.

The People's Budget and the Agenda to Raise America's Pay are mainstream programs that would be eminently achievable if the Republicans and the moneyed elites would allow taxes on the people who are reaping all the benefits in this economy to be raised to a level that makes sense. They do not need all the money, they really don't. If they are taxed at the rates people of vast wealth have historically been taxed they will still have vast wealth. But this is considered crazy talk in the political world. The GOP's insistence that 5+5=12, on the other hand, is not only perfectly respectable it is Very, Very Serious.